Man in the Mirror and Purple Haze, Part 6 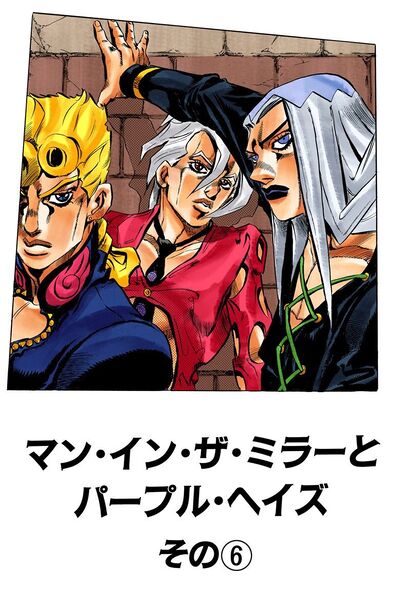 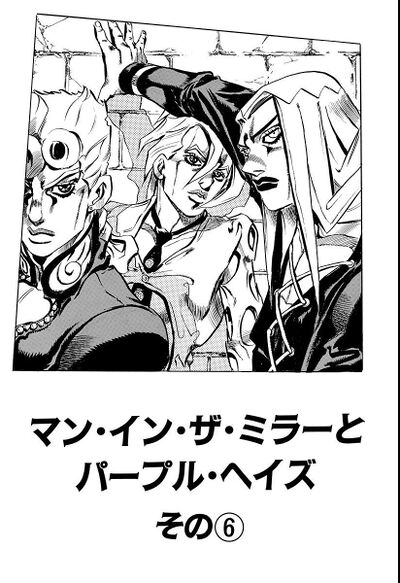 Man in the Mirror and Purple Haze, Part 6 (マン・イン・ザ・ミラーとパープル・ヘイズ その⑥, Man in za Mirā to Pāpuru Heizu Sono 6), originally If He Escapes...! (外に出れば！, Soto ni Dereba!) in the WSJ release, is the forty-fifth chapter of Vento Aureo and the four hundred eighty-fourth chapter of the JoJo's Bizarre Adventure manga.

When he graduated high school, Leone Abbacchio became a cop so that he could protect the people. While patrolling he realized that the police are full of contradictions. Cops were corrupted and criminals who were caught got out of punishment with their money. One day Abbacchio had enough and accepted a bribe. Later, Abbacchio and his partner went to a building to stop a robbery. Abbacchio found the thief and aimed his gun at him.

The thief revealed himself as the thug who bribed Abbacchio, and blackmailed Abbacchio into putting away his gun. The thug pulled out a gun and shot, but at the same time, Abbacchio's partner dove in front of Abbacchio and shot the thug, resulting in both of them dying. Abbacchio was punished for his corruption, and lost all emotions from the guilt he felt. As a result, other's deaths don't matter to him, and the only important thing is completing the mission.

Giorno, after infecting himself with Purple Haze's virus, was pulled into the mirror world by Illuso, infecting him as well. Within thirty seconds the virus will spread throughout the body killing Illuso, and because he was infected first, Giorno will die even before that. Illuso returns to the real world, separating his arm so the virus can't spread. Fugo believes they are defeated, however this was all part of Giorno's plan. Now that he is in the real world he cannot escape Purple Haze, and by turning a stone into a snake Giorno can track Illuso's position.

In the real world Illuso is relieved to be alive, until he sees Gold Experience. At that moment, before Illuso can even react, Purple Haze grabs his throat. Illuso thought that cutting off his own arm was enough to escape the virus, but he was horribly mistaken.