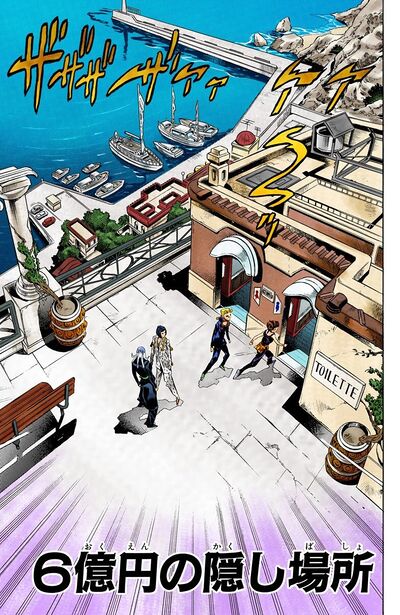 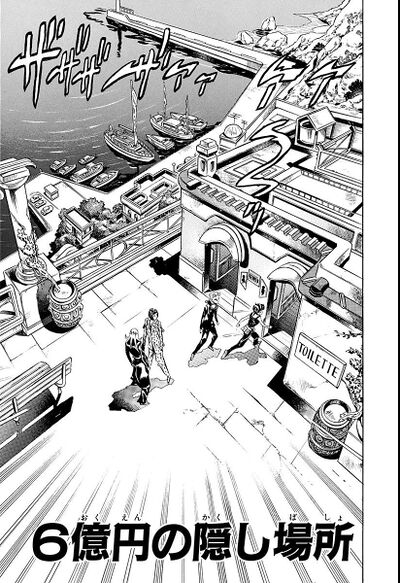 The Hidden Six-Hundred Million Yen Stash (6億円の隠し場所, 6-oku En no Kakushi Basho), originally She's in Your Care! (渡したぞ！, Watashita zo!) in the WSJ release, is the twenty-ninth chapter of Vento Aureo and the four hundred sixty-eighth chapter of the JoJo's Bizarre Adventure manga.

Team Bucciarati, now reunited, enters a public restroom near Capri's north port. Fugo tells Mista he should go to the hospital due to his wounds, but Mista refuses, stating that he doesn't want to miss out on finding the treasure. In response, Fugo staples Mista's wounds shut, much to the amusement of Narancia.

Bucciarati prepares to reveal the location of Polpo's treasure, but is interrupted by a pair of janitors. Narancia confronts the two, and is counter attacked by one. The gang prepares for another fight, but is stopped when Bucciarati reveals that the janitors are actually gang operatives here to pick up the money. Bucciarati, using Sticky Fingers, grabs the treasure from within a urinal, and gives it to Pericolo.