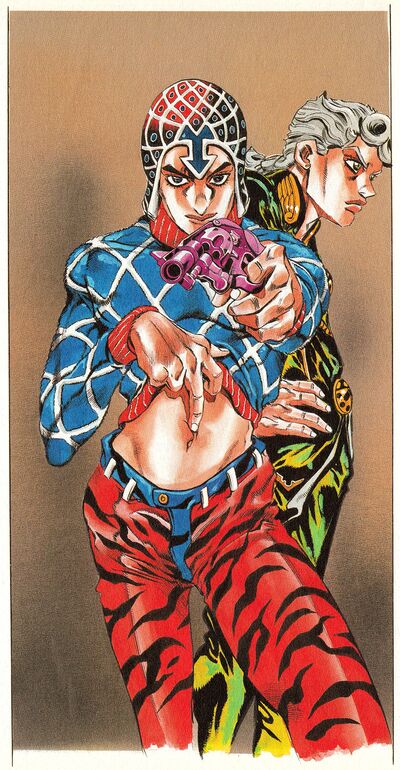 Mario Zucchero is exposed as a Roman Passione member and subsequently tortured, before Moody Blues shows him radioing the group's destination, suggesting that his partner has by now overtaken the group to Capri. Revealing his Stand Sex Pistols, Guido Mista rides with Giorno ahead of the group directly to the Marina Grande port of the island.[1]

Giorno and Mista manages to lure out the enemy, but he escapes and only Mista is able to follow him.[2] The enemy, Sale, then reveals his Stand Kraft Work, which is capable of freezing objects in place by touching them. Despite Kraft Work's power, Mista manages to lodge two bullets in Sale's head, defeating him.[3]

With their enemies incapacitated, Team Bucciarati reunites and enters a public restroom near Capri's north port. Bucciarati prepares to reveal the location of Polpo's treasure before being interrupted by a pair of janitors. Though Narancia confronts the two, Bucciarati introduces the shorter janitor as Pericolo, a Passione operative sent to recover the treasure for the gang. Bucciarati uses Sticky Fingers to retrieve the treasure from within a urinal; upon handing the money to Pericolo, he is declared an operative in the gang. Pericolo then reveals that Bucciarati has inherited Polpo's last mission: the taller janitor is revealed to be the boss's daughter, whom Bucciarati must protect with his life.[4]