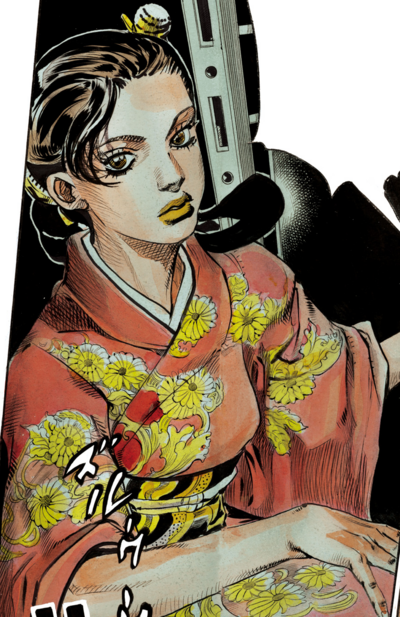 One day, she appears at the inn belonging to Rohan Kishibe's grandmother and takes an interest to Rohan's drawings. She has a mysterious link to the cursed painting, "Under the Moon".

Nanase is a young Japanese woman of average height and a slender build. She has shoulder-length dark flowing hair, sometimes tied into a ponytail or with a hairband on top.

The series is known for alternating colors between media, the information presented below may or may not be canon.
Skin(Fair)
Hair(Brown)
Eyes(Brown)
First Outfit(Yellow sundress)
Second Outfit
(Red kimono with yellow/red flowers and black/white stripes)
Third Outfit(Pink sundress)

Nanase is a courteous and friendly woman, playfully confronting Rohan after noticing that he was staring at her for some time. She openly takes an interest in his drawings, even forcing him to show them to her by inviting him into her room. She feels a bit jealous after seeing his work, thinking that his art feels so real.

Despite her amiable side, Nanase is also emotionally unstable, unexpectedly bursting with anger at Rohan when he eavesdrops on one of her phone calls out of concern for her and later when she sees that he drew her as a character in his manga. She violently stabs and tears Rohan's drawing of her while screaming that it's stupid, before suddenly apologizing in tears. However, Rohan later learns that Nanase did so in order to protect him, as if Rohan became attached to her then Nizaemon's hatred in the "Under the Moon" painting would kill him.

She seems to have dearly loved her husband, wanting to free his spirit from his hatred and seal away the curse of his painting before her spirit can also be free. Although her goals were ultimately benevolent, she risks Rohan's life to stop the curse. She is very remorseful for getting Rohan involved and constantly apologizes, asking him for forgiveness. 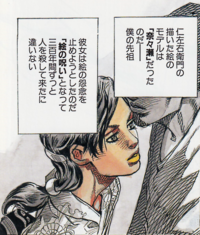 Around the 1700s, Nanase Kishibe marries a painter by the name of Nizaemon Yamamura. Nizaemon discovers an infinitely black pigment in the trunk of a tree and extracts it to use in his paintings. Unfortunately, the tree was ancient and chopping it down is forbidden by decree, and so Nizaemon is executed just after his wedding with Nanase. After becoming a widow, Nanase becomes gravely ill and dies soon after. 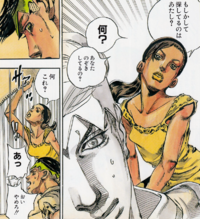 In 1996, Nanase reappears as a ghost using the name Nanase Fujikura and rents a room in Rohan Kishibe's grandmother's inn. She agrees to follow the rules and states that she was going to get divorced soon, since the grandmother didn't allow couples staying in the inn. While Nanase is changing her clothes, Rohan, at the age of seventeen at the time, accidentally intrudes into her room. He becomes intrigued by her the next day while she is doing the laundry outside and attempts to use her as a model for his drawing. Nanase catches him staring at her and confronts him asking if he was spying on her. Rohan explains that he is trying to become an up-and-coming manga artist and was using her as inspiration, but apologizes for not asking her beforehand. Nanase shows interest in his drawings and asks to read his work once he finishes it.

Days later, Nanase stops Rohan in the hallway asking to see his manga, although he states he hasn't completed it yet. She invites him into her room nonetheless, and looks through his drawings with interest. Rohan attempts to leave, but Nanase stops him and begins a story about the "darkest painting in the world." She claims that she was a little girl when she saw the painting and that a landowner in her hometown found it in the back of his barn before a curator from the Louvre took it to the museum. In reality, she lied about seeing the painting as a child as it is later revealed that she was speaking about the painting created by her husband, Nizaemon.

Rohan asks Nanase why she thinks the painting is evil but she suddenly changes the subject by saying Rohan should leave since it's late. Her phone starts ringing and Rohan eavesdrops on her conversation behind the door. Concerned because she was crying about her divorce, Rohan enters the room again asking if she's okay. In response, Nanase runs away from the inn and disappears. 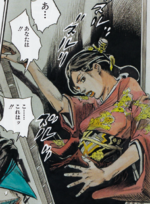 Emerging from the painting

A week later, she returns and Rohan knocks on her door. As soon as she opens the door, she embraces him while crying. Rohan tries to comfort her, claiming that he'll protect her from her fears. He begins using Heaven's Door on her to find out why she's crying but decides not to, thinking he doesn't want to invade her privacy. Rohan attempts to show her his drawings that he drew of her, but she suddenly becomes enraged and begins stabbing the drawings. Nanase runs away crying again, only this time she doesn't come back.

Ten years later, Rohan journeys to the Museum of the Louvre where he finds the dark painting Nanase had described. "Ghosts" begin to appear, and among them is Nanase herself, who spawns out of the painting. As the cursed painting was killing people continuously for the past three hundred years, Nanase wanted to stop her husband's resentment and seal the curse away for good by using Rohan. She apologizes multiple times as the ghosts slowly surround him. Rohan manages to escape by erasing his memories and thus eliminating the bonds he has with those close to him. Nanase is never seen by Rohan again, though since the painting is rumored to have been burned, Nanase's spirit is presumably free.[1]