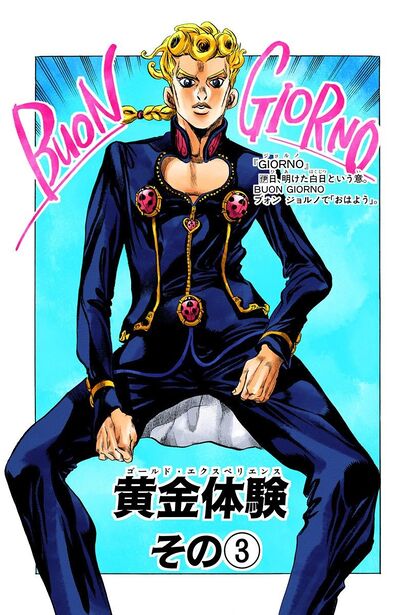 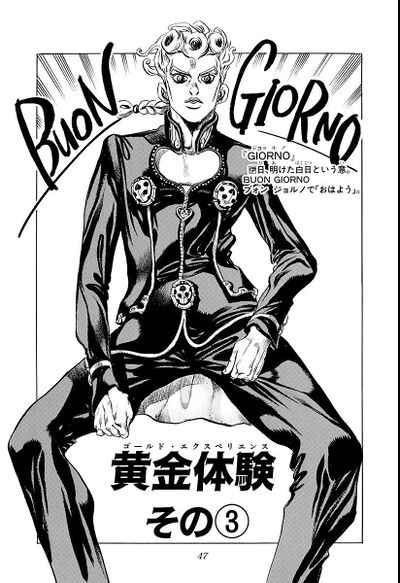 Koichi contemplates the similarities between Haruno Shiobana and Giorno Giovanna, revealing information on Haruno's background that he had heard: his father died shortly after his birth, and his mother remarried to an Italian man when Haruno was 6, moving to Naples and living there ever since. Considering what he had heard from the two guards from earlier, Koichi considers whether Haruno and Giorno are truly the same person, deciding to go to Haruno's address and confront him personally, with hopes of also regaining his luggage and valuables back.

On his way to Haruno's school dormitory, Koichi passes by an unguarded briefcase, noting out loud how the men that the briefcase belongs to are careless for doing such, thinking it'd likely get stolen as his suitcase was from him. A nearby café barista overhears this and reassures Koichi that no one would dare to steal from the men who the briefcase belongs to, but Koichi comes to the conclusion that this part of Italy must be a very safe place. After declining an offer of food from the employee due to a lack of money, Koichi suddenly spots Giorno, his luggage thief, sitting nearby, surrounded by female teenage admirers. In front of him is a finished cup of tea, and he pulls out a stack of money bills to pay for the drink. When Giorno spots Koichi in return, he stands from his seat in surprise. Koichi mentally decides that Haruno and Giorno must be the same person and therefore the one Jotaro is looking for, but due to his increasing hunger, first demands Giorno to return his stolen luggage. Giorno quickly explains that he had already sold it, advising Koichi not to follow him, before attempting to flee.

Koichi, prepared this time round, uses his Echoes 3 Freeze to weigh Giorno's hand down. Before he can hit the ground, Giorno, realizing Koichi is a Stand user, reveals his own Stand, which he calls Gold Experience, and creates a tree underneath himself to rise and escape from Echoes's ability. For a second time, he tells Koichi not to following him, informing him that repeating the same thing multiple times is a waste of time. More desperate, Koichi tries to knock him down by destroying the tree with Echoes, but the attack is deflected, knocking him down and allowing Giorno to flee once again. Before he leaves, however, he notes that due to Koichi holding back on the full destructive power of his Stand, he is a good person.