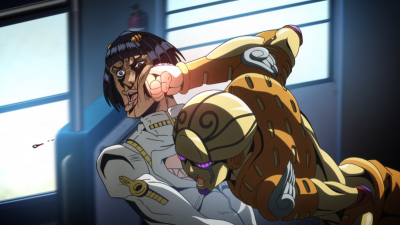 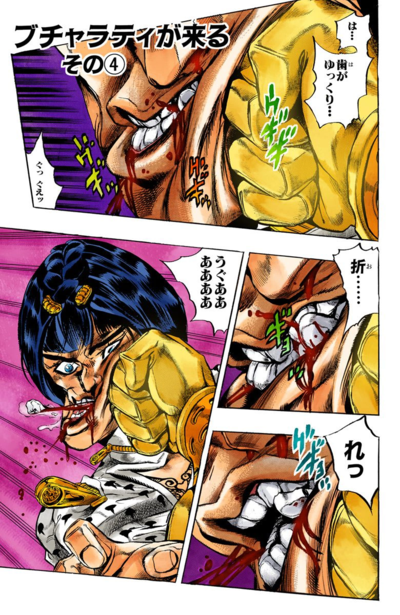 After his battle against Giorno, Koichi calls Jotaro by telephone, and asks who Giorno is and what his relationship with Jotaro is. Jotaro says he is the son of DIO. Meanwhile, Giorno is riding a train, when Bruno Bucciarati asks Giorno questions about Luca's death. Giorno lies to him and Bucciarati goes away. After, Giorno opens his hand only to find an eye enclosed, and Bucciarati reappears behind him, licks him, and confirms he's lying because he can tell if someone is lying just by the taste of their sweat.[1]

A flashback details Giorno's past. After spending several years as a timid bullied child, the protection granted by a gangster helped him gain confidence and Giorno set for himself the goal of becoming a "Gangstar".[2]

A fight ensues between Giorno and Bucciarati who reveals his Stand Sticky Fingers, which creates zippers on any surface. Gold Experience's punches are revealed to be quite dangerous as they can mess up Bucciarati's perception of time, and Giorno defeats Bucciarati.[3]