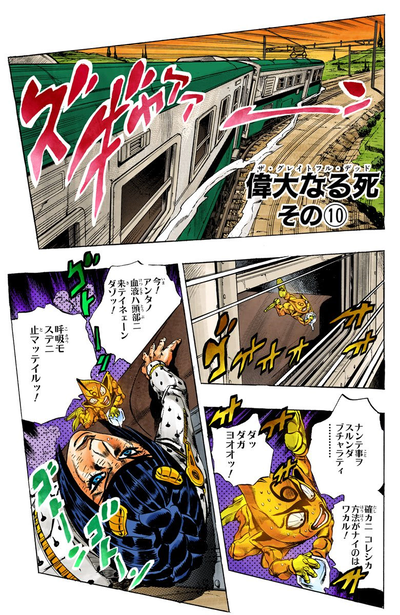 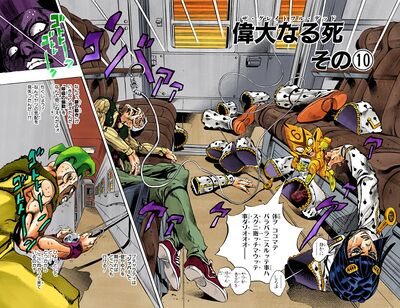 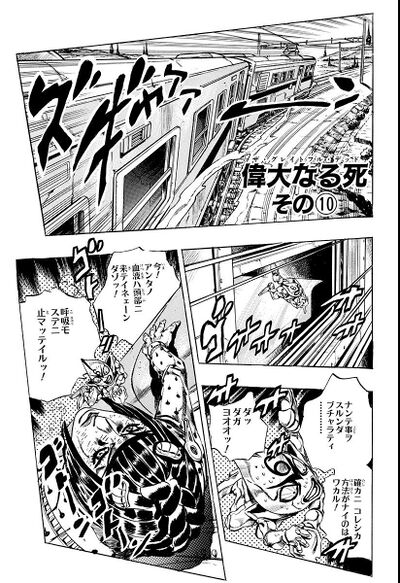 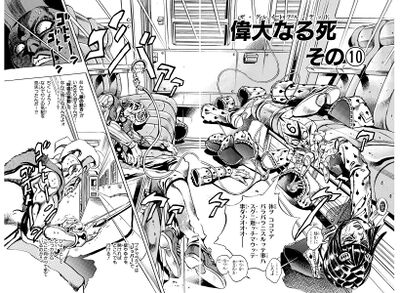 The Grateful Dead, Part 10 ( その⑩, Za Gureitofuru Deddo Sono 10), originally The Whereabouts of "Resolve"!! (『覚悟』の行方!!, "Kakugo" no Yukue!!) in the WSJ release, is the fifty-eighth chapter of Vento Aureo and the four hundred ninety-seventh chapter of the JoJo's Bizarre Adventure manga.

With pieces of his body all over the place, Bucciarati is unable to breathe and his heart has stopped beating. Because of this Pesci is unable to sense Bucciarati's presence with Beach Boy. In response Pesci starts spreading his fishing line to cover the entire train car to search for him. Beach Boy's hook begins attacking any movement within the train, killing passengers and eventually finding Bucciarati's heart.

Bucciarati uses Sticky Fingers to split his heart in two, allowing him to stay under Pesci's radar. Pesci, upset, retrieves his hook, and tries searching for Bucciarati in other areas of the train. Bucciarati tries to retrieve the pieces of his body, but can't reach them. Realizing his fate, Bucciarati gives up and prepares to die.

However, Pesci stops the train in hopes that it would help him stop Bucciarati, and the inertia causes Bucciarati's body to come back together. Outside the train, Pesci runs toward Prosciutto, but is stopped when Bucciarati comes through the train's wall. Filled with anger, Bucciarati prepares for the final showdown.