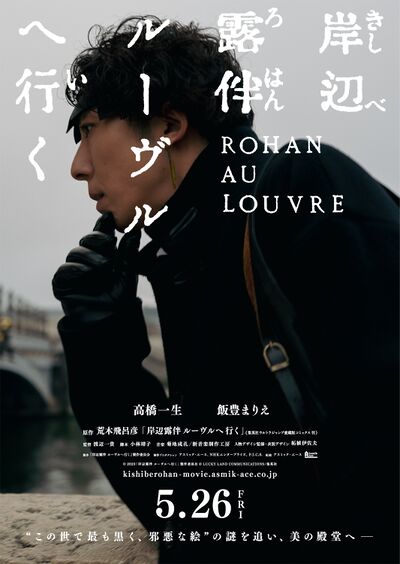 Rohan au Louvre (岸辺露伴 ルーヴルへ行く, Kishibe Rohan Rūvuru e Iku, lit. Rohan Kishibe Goes to the Louvre) is a live-action movie adaptation of the one-shot Rohan au Louvre, based on the Thus Spoke Kishibe Rohan TV drama series by NHK. It was officially announced on January 4, 2023 and is set to release in Japanese theaters on May 26, 2023.[1]

According to Issey Takahashi, the movie functions as the ninth episode of the TV drama.[1]

The blackest and most evil painting in the world. In pursuit of its mystery, Rohan Kishibe, a manga artist with a special power, visits the Louvre in France. There, a number of horrifying events await him...

Filming ended in Japan in Fall 2022 and continued in Paris, France. The film was shot on location at the Louvre Museum, the Pont des Arts, the Champs-Elysées, the Arc de Triomphe de l'Etoile, the Pont Alexandre III Bridge, and the Place du Carrousel. It is unusual for a film to be permitted to be shot at the Louvre, and this is the second Japanese film to be shot there since All-Round Appraiser Q: The Eyes of Mona Lisa, which was released in 2014.[1]

Rohan Kishibe: Issey Takahashi
“
It has now been three years since I was first given the chance to play the character of Rohan Kishibe. Whether it be in a drama or in a movie, every time I am allowed to play Rohan Kishibe is an extremely special event in my life.


As I write this comment for the reveal, I am currently on-site in Paris. Ever since the first season of the drama, I have had an incredible Japanese team around me working hard to bring Rohan Kishibe to life. In addition to the Japanese filming crew here, we have been joined for the past few days by a local French team so professional and sincere that it feels like we've worked together on all three seasons. I am truly witnessing the creation of a one-of-a-kind masterpiece.
During the filming of the first season, I spoke to director Kazutaka about adapting "Rohan au Louvre," only seeing it as a pipe dream. I said to him then, "Someday, I hope we can actually start shooting in Paris." And now, actually standing on the paved streets of Paris, I don't feel the slightest bit uncomfortable being Rohan, which I believe is due to the outstanding staff work supporting me. From the bottom of my heart, I am truly grateful that, despite being in a foreign country, nothing about playing Rohan has changed.
The Japanese part of the work, which was produced in parallel with the third season of the drama, plays just as important of a role as the French part we're shooting right now. Topics such as bloodlines, inheritance, and the past play key roles in any work related to JoJo, and those topics will be explored in this work as well. One must inevitably face those things in order to exist in the present, and time can be both kind and cruel to everyone. Rohan is no exception: in this work, he too must interrogate his own existence.
This work is conceptually part of the live-action "Thus Spoke Kishibe Rohan" drama, and the story functions as its ninth episode. If you've followed the drama series so far, you'll naturally enjoy the movie, but I think people who don't know anything about what Rohan's been up to in his own series will enjoy it, too.


I hope everyone who comes to the theater will enjoy this very unique work.
”
—Issey Takahashi
“
岸辺露伴という人間を演じさせていただいてから、3年目に入りました。
劇場版や映画版と銘打たない今作においても、岸辺露伴を演じ続けさせていただけていることは、僕の人生にとって非常に特異な出来事です。

Kyoka Izumi: Marie Iitoyo
“
The third season of the "Thus Spoke Kishibe Rohan" drama has just finished airing... To tell the truth, we've been working on filming this movie the whole time! Just as I mentioned in one of my lines in the last episode of the drama, Rohan-sensei finally goes to the Louvre! And as his editor, I'll be going to Paris with him!


I'd like to express my heartfelt gratitude toward the wonderful team that has always supported us, but also toward the new staff members who have joined us this time around and allowed us to perform in this wonderful new environment! Once we began shooting with the local staff team in France, I managed to overcome the language barrier between us and savor the excitement of helping bring a project of this scale to life. It's going to be an unforgettable experience, trust me.


It makes me so happy that another new episode is being added to this work, which everyone's been looking forward to for a long time! Rohan-sensei and Kyoka face the mysteries hidden within the distant Louvre Museum, along with the past itself! I hope you all enjoy this work just as much as the last one!
”
—Marie Iitoyo
“
「岸辺露伴は動かない」第三期ドラマは放送終了したばかりですが…実は映画の撮影も密かに進行していました！今期ドラマのラスト、私の台詞にもありましたが露伴先生が遂にルーヴルへ！私も担当編集として、パリに行けることになりました！

Kazutaka Watanabe, Director
“
The city of Paris seen in the movie The Conformist is decadent and dismal. It's not a city of flowers where people celebrate life, but rather a dark city filled with the stench of death and perversion. Ever since the project started three years ago, the visuals, artistic scenery, and costume design of "Thus Spoke Kishibe Rohan" have taken heavy inspiration from that movie.


When I visited Paris to begin shooting, I found a beautiful but cold world draped with thick and heavy clouds on the verge of falling, where the freezing-cold rain kept pouring down, just like in The Conformist. And now, Rohan Kishibe is standing there.


It's an odd feeling, a mix of déjà vu and exhilaration. But there is not a hint of sentimentality. Rohan is supposed to be there, and there he is. Filming begins as usual.
”
—Kazutaka Watanabe
“
映画「暗殺の森」で描かれるパリは退廃的で陰鬱だ。人々が生を謳歌する「花の都」ではなく、死と倒錯の匂いが充満した「黒い街」。３年前にプロジェクトが始まって以来、「岸辺露伴は動かない」の映像ルック、美術設定、扮装表現は、常にこの映画から有形無形の大きな刺激を受けてきた。

Yasuko Kobayashi, Screenwriter
“
When I first heard that "Thus Spoke Kishibe Rohan" was going to be made into a live-action series, I didn't have the slightest clue that it would also become a movie. Also, as the series went on and we selected the original works to be adapted, "Au Louvre" was never included in our list of candidates. A two-piece story that unrealistic is now being brought to life.
This is one of the rare stories that focuses on Rohan himself. By all means, I hope you enjoy it in the theater.
”
—Yasuko Kobayashi
“
初めて『岸辺露伴は動かない』を実写化するとお聞きした時、映画になるという想像はカケラもしていませんでした。またシリーズが回を重ねる度に皆で挙げていた原作候補に、この『ルーヴルへ行く』が入ることはありませんでした。そんなダブルでリアリティのない話が実現します。
珍しく露伴自身がフォーカスされた物語です。ぜひ映画館で楽しんで頂ければと思います。
”