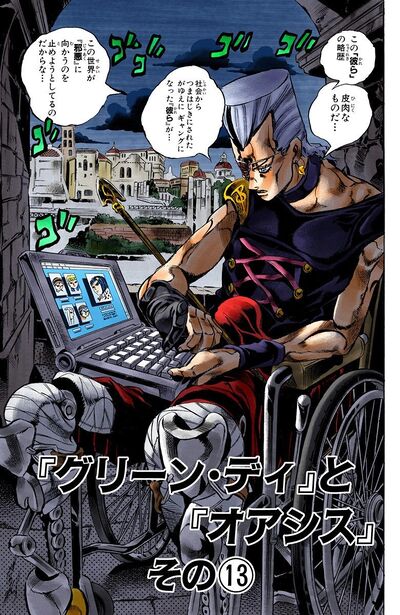 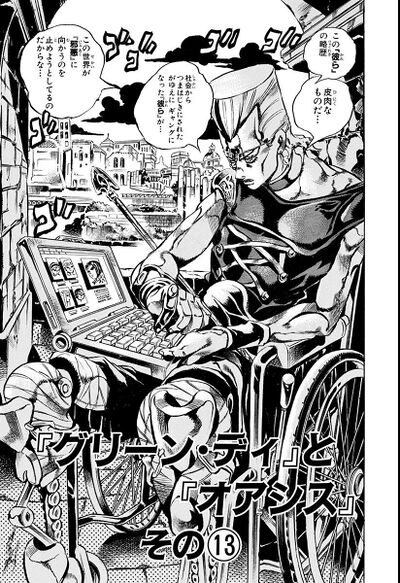 "Green Day" and "Oasis", Part 13 (『グリーン・ディ』と『オアシス』 その⑬, "Gurīn Dei" to "Oashisu" Sono 13), originally Become the Victors!! (勝者となれ!!, Shōsha to Nare!!) in the WSJ release, is the one hundred twenty-seventh chapter of Vento Aureo and the five hundred sixty-sixth chapter of the JoJo's Bizarre Adventure manga.

Polnareff thinks about Bucciarati's squad, and waits to see if they can reach him before the enemy; if they fail, he may have to destroy the Arrow.

Meanwhile, Bucciarati has difficulty resisting the urge to move inside the rain of spikes. When some of them threaten his head, he has no choice but to move toward the Colosseum. Secco detects him, and approaches his position despite Sticky Fingers unzipping a lamp post to confuse him.

This causes Bucciarati himself to melt and he accidentally cracks a finger, which tells his exact location to Secco. The gangster throws a huge chunk of hardened ground through the soft ground, expulsing Bucciarati. Secco has cornered Bucciarati, but Bucciarati pierces a car's tire, figuring that he doesn't really need eardrums. As a result, the pop deafens Secco.