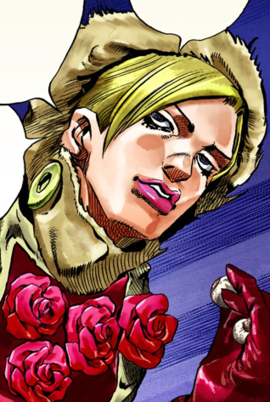 Dr. Ferdinand is a man with blond hair - most of which is hidden under a thick, beige hood - that is parted on the right. He has long bangs that are arranged on the left side of his face.

His outfit's most notable feature is the several roses near the top of his long main garment, which appears to be only slightly shorter than his coat and resembles a dress or tunic. He dons a long, hooded coat, gloves, kneepads, pants, and boots. Everything but the coat and kneepads appears to be the same color (depicted as deep red in digital color).

He looks somewhat androgynous and seems to be wearing mascara - particularly below his eyes - and perhaps lipstick.

The series is known for alternating colors between media, the information presented below may or may not be canon.
Skin(Fair, pink lipstick.)
Hair(Blond)
Eyes(Black)
Outfit
(Beige coat over a crimson dress/tunic covered in roses, crimson gloves and boots.) 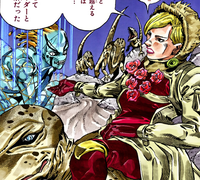 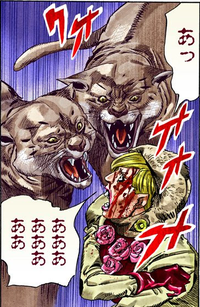