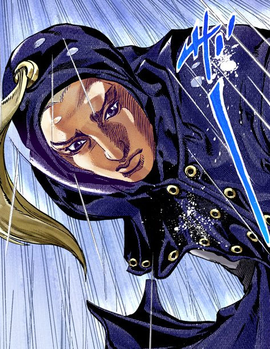 Blackmore is one of Funny Valentine's henchmen. When Lucy Steel's intrusion is discovered while she investigates Valentine's schemes, Blackmore is tasked with tracking and eliminating whoever tried to spy on the President.

Blackmore is a Stand User, wearing his mask-Stand Catch the Rainbow to literally walk on falling raindrops.

Blackmore is a man of average to above-average height and medium build.

He wears a black, hooded poncho, punctuated in two columns on its chest, and lining its sleeves by small metallic rings. Through the top of its hood is threaded a long ponytail of his light hair. Underneath, he wears light clothes covering his arms to his metacarpals; and his pants and boots in a piece, patterned by a symbol resembling a halved taijitu

The series is known for alternating colors between media, the information presented below may or may not be canon.
Skin(Fair)
Hair(Blond)
Eyes(Deep Blue)
Outfit
(Navy poncho with golden rings, gray shirt, white pants with with gray taijitu symbols, white shoes.)

Blackmore is an efficient assassin, deeply loyal to Valentine; equally believing in his authority and cause.

After his vision of Jesus, Blackmore becomes exalted

Blackmore is largely depicted with a placid personality, talking slowly and being impassive to most things. However, his mission towards the corpse part excites himself greatly and he even becomes exalted when he feels the presence of Jesus. Usually obedient to Valentine, he falls to a brief temptation to take the Corpse Part for himself but regains his senses after being shot, ultimately deeming that Valentine is the worthiest of them all.

Alongside Blackmore's calm personality is his great analytical acumen, allowing him to effortlessly track an intruder and unmask Lucy Steel through the various indirect clues found during his short investigation. As one of the President's men, he also coldly approaches murder, killing Mountain Tim without a second thought and being prepared to do the same to Lucy, Gyro, and Johnny.

Blackmore has a notable verbal tic, as he regularly mutters "'Scuse me" (すいませェん, Suimasēn) to people, an informal derivative of "Excuse me" (済みません, Sumimasen). He keeps the habit even with his employer and current President, Funny Valentine.

Blackmore's Stand, Catch the Rainbow, allows him to manipulate rain. He can halt falling drops, make them into threatening obstacles or a path for him to walk on in the air, and relocate parts of his body by melding with the rain.

Blackmore is introduced as one of Funny Valentine's subordinates.

A Traitor in Kansas City 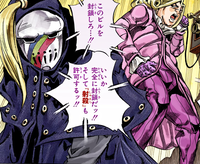 Blackmore & Valentine raise the alarm about a traitor

In Kansas City, Blackmore is summoned to Valentine's office and the two discuss their course of action. Receiving reports of Johnny Joestar and Gyro Zeppeli going missing, Valentine questions why the balloons cannot follow these two and his assistant argues that it is still difficult to follow someone with a balloon. Valentine then wonders if Steven Steel is being uncooperative. However, he cannot dispose of him yet. Unbeknownst to him, he's being spied on by Lucy from the other side of the street. Valentine and Blackmore go to the roof where the aviary is kept and checks on it to see if Ringo Roadagain's messenger pigeons have arrived. Blackmore guesses correctly that Ringo's pigeons must have recently arrived but also that someone broke in the cage. Valentine spots a feather coming out of under the cage and sees the pigeon flying away. Blackmore retrieves the pigeon by walking on the rain with his Catch the Rainbow ability but the capsule it carries is empty. Someone has stolen Ringo's Message. However, Blackmore guesses that the thief is not a Stand User since they wouldn't have hidden under the aviary. Moreover, Blackmore theorizes that the thief has infiltrated the government. They raise the alarm and Blackmore checks the building from the exterior, catching a glimpse of the infiltrator. It seems that they have cornered the traitor but they come up empty. 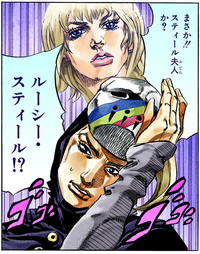 Blackmore realizes Lucy is the traitor

Blackmore sticks to his theory and decides to have the phone in the office the security broke in checked. He leaves, notably seeing Steven Steel receiving a second lunch box from his wife Lucy Steel. The trail of the phone call leads him to Mountain Tim. Blackmore confronts the cowboy. Tim draws his gun and hits Blackmore in the chest once. Blackmore merges with the rain and evades the attack and Tim disassembles himself to bind and shoot Blackmore in the head. But, Blackmore yanks the rope, pulling Tim in the trajectory of the immobilized rain drops that cut open his head. On the ground, Tim is compelled one last time to reveal who was the caller but Tim only says he never expected to die quietly and only wished for a place to return to. Mountain Tim is subsequently shot in the head by Blackmore. Checking Tim's corpse, Blackmore sees that a part of his clothes are particularly wet and that he was holding someone. Recalling Steel's lunch boxes, Blackmore realizes that Lucy Steel is the traitor. Rushing to her apartments, Blackmore is only told that she left suddenly and he gives chases through the storm.

Blackmore eventually catches up to Lucy Steel. Asking her if she can see his mask, which is a Stand, Blackmore confirms that she isn't a Stand User and lets his guard down. He takes the Spine from Lucy and reaches a telephone pole, trying to call the President. Blackmore is briefly tempted to keep the Spine for himself. However, a spatial anomaly transports them further from Kansas City, cutting off the telephone line. At this point, Jesus appears to Blackmore for moment. Blackmore is ecstatic but his moment is cut short when Lucy shoots Blackmore in the throat and escapes toward Gyro Zeppeli and Johnny Joestar. Learning his lesson, Blackmore fully dedicates himself to Valentine's cause. He seals his wound with the rain, letting him live for the moment. 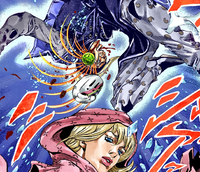 Blackmore is defeated by Gyro

Blackmore eventually finds Lucy with Gyro Zeppeli and Johnny Joestar. Gyro and Johnny attack but the immobile rain drops deflect the projectiles. Moreover, Gyro's arm is pierced by raindrops since his arm moved. The three are cornered by rain blades and Blackmore moves to kill Lucy as her punishment for her sin. Johnny tries to shoot but is choked by Blackmore's hand, Blackmore promising to take his Corpse Parts as well. However, Gyro decides to act: by doing his motion backward, Gyro is able to position his arm for a second throw that bounces the Steel Ball between the raindrops and collides with the last one near Blackmore. Blackmore ignores the Ball to try and stab Lucy with a rain blade, but doesn't see that it keeps spinning and through friction, evaporates the raindrop. The agent is hit in the head. Defeated, Blackmore's Catch the Rainbow stops and he succumbs from previous bullet wounds.