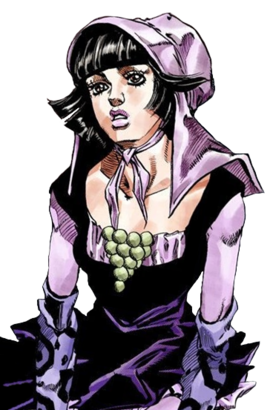 Sugar Mountain (シュガー・マウンテン, Shugā Maunten) is a side character featured in the 7th part of JoJo's Bizarre Adventure, Steel Ball Run, introduced in the "The Land of Promises: Sugar Mountain" story arc. An older woman with the appearance of a young girl, she is trapped by and made the current guardian to a Large Tree possessing a Stand of the same name.

The series is known for alternating colors between media, the information presented below may or may not be canon.
Skin(Pale)
Hair(Black)
Eyes(Gold)
Outfit
(Black dress over a lavender underdress, lavender bonnet and kerchief, grape green necklace, periwinkle sleeves and socks with blue and black leopard prints.)
Boots(Gray) 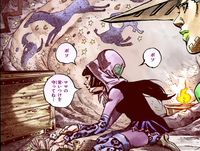