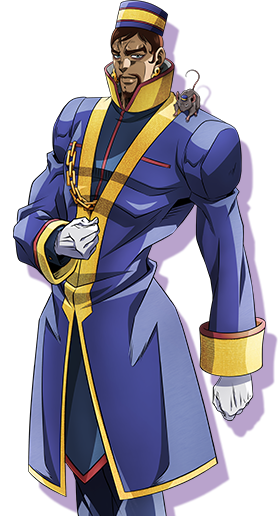 Anton Bruckner's Symphony No. 7 in E Major (since an hour passes by the time he's finished listening to it)[1]

He is one of DIO's subordinates who confronts the Joestar Group at Hotel Haboob while they are in Egypt.

Dija is a man of average height and build with a light-brown skin tone. He has short dark brown hair with side swept bangs, curved sideburns, thick eyebrows, and a pointed goatee.

His attire mainly consists of a gold-trimmed double-layered long coat with a popped collar. He also wears a matching bell-boy hat, white gloves, key-shaped earrings, a gold chain, and a pair of crakow shoes.

He gives off a calm demeanor and is usually seen with a mouse wearing a bell-boy hat on his shoulder.

Dija Maker's Stand allows him to manipulate the building he is residing in. In his fight with the Joestar Group, he uses its ability to turn a hotel into a giant labyrinth. It is also capable of stealing Stands, mind-controlling people, and creating various traps.

Dija Maker's traps include several "guardian" statues, ice arrows, a wrecking ball, a shotgun, dynamite, and a poison arrow. His final trap is his mouse. It is capable of detecting Stand users and also somehow has a way of killing any Stand user.

When Dija Maker was a child, his friend left him behind and went home during their game of hide-and-seek. However, Dija remained hidden until dawn.

After growing up, Dija becomes the hotelkeeper of Hotel Haboob and is recruited by DIO to eliminate the Joestar Group.

Jotaro and his friends encounter Dija Maker in a hotel they stay at during their trip to Egypt. After they sign the hotel's contract, they suddenly lose their Stand abilities. Without revealing himself, Dija tells the group that they have one hour left to live, and ponders how they'll spend their remaining time.

Dija Maker attempts to use his final trap

Dija tells them that if they can't escape, they'll disappear without a trace. He then uses his Stand to distort the walls of the hotel and turns it into a convoluted maze. The group is unable to crack the walls, forcing them to figure out a different way to escape. They also could not take back the contract from the front desk staff since Dija is controlling their minds.

The Joestar Group succeeds in bypassing his various traps and finally reaches him. When he sends out his final trap, which is his mouse, he's shocked to see that it won't activate because they discovered its weakness. In the end, Jotaro and Star Platinum punch him, breaking all of the bones in his body.