The Mystery of King Crimson, Part 5 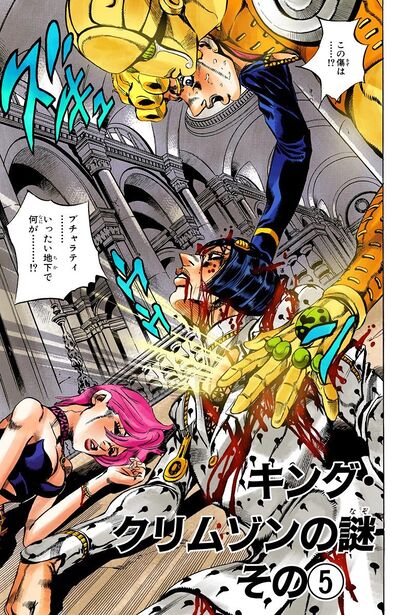 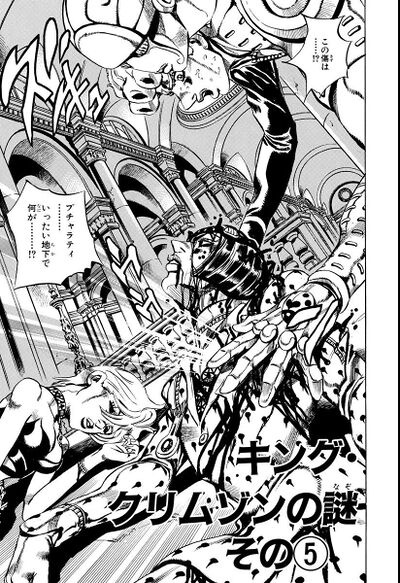 The Mystery of King Crimson, Part 5 (キング・クリムゾンの謎 その⑤, Kingu Kurimuzon no Nazo Sono 5), originally Betrayal! (裏切り！, Uragiri!) in the WSJ release, is the eighty-third chapter of Vento Aureo and the five hundred twenty-second chapter of the JoJo's Bizarre Adventure manga.

Giorno heals Bucciarati's body and peeks into the columbarium through the hole, seeing the bloodbath it was. Turning his gaze back on Bucciarati, Giorno realizes that Bucciarati is apparently dead and panics. Hung on the roof of the columbarium, the Boss sees how dangerous Giorno can be and opts to kill him, but before he can reveal himself, Giorno hears Bucciarati's ghost telling him to leave the church.

Giorno turns his head, but sees nothing. However, Bucciarati finally wakes up to tells Giorno to call the others before King Crimson can attack. Giorno sends his laptop as a flying fish crashing near the squad and they rush toward Giorno. As they get out of the church, the Boss chooses to retreat temporarily, not willing to show himself before so many people, but swears to get them.

Bucciarati reveals to his team that he betrayed the Boss for Trish's sake, shocking everyone. He temporarily collapses, just long enough to impale his hand into a metal shard without reaction, to Giorno's confusion when he sees it.