The Mystery of King Crimson, Part 4 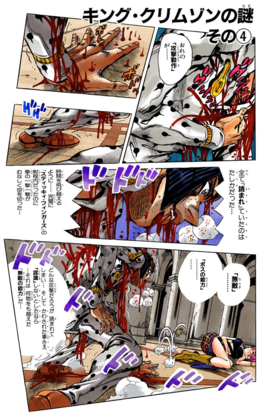 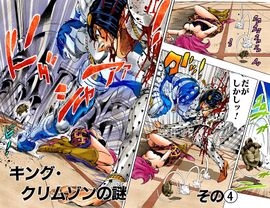 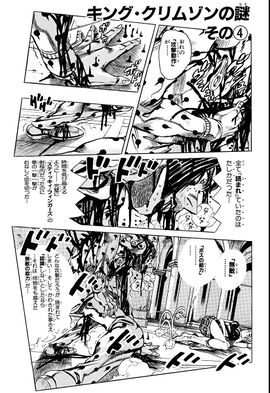 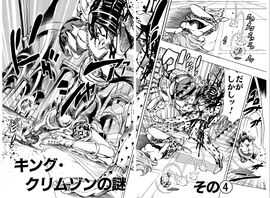 The Mystery of King Crimson, Part 4 (キング・クリムゾンの謎 その④, Kingu Kurimuzon no Nazo Sono 4), originally Predict It! (予測しろ！, Yosoku Shiro!) in the WSJ release, is the eighty-second chapter of Vento Aureo and the five hundred twenty-first chapter of the JoJo's Bizarre Adventure manga.

Bucciarati opens a zipper on the ground, sending the small Coco Jumbo down a canalization. Slowly dragging himself and Trish up the stairs, Bucciarati reflects on the Boss' power, and tries to look for any weakness, the only being that the Boss can foresee a small amount of time in the future.

Time is erased again, and the Boss sees Sticky Fingers' arm make a zipper on a column. Positioning himself for the kill, the Boss misses Bucciarati when the lieutenant grabs the slider's handle and shuts the zipper, propelling him and Trish up the column and they reach the surface and meet Giorno.