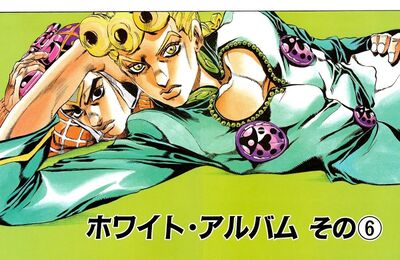 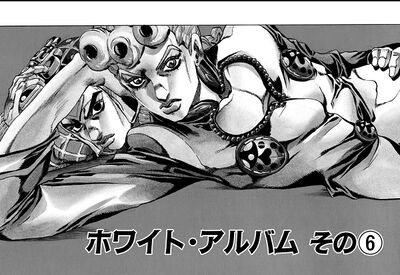 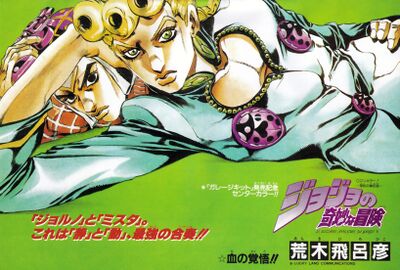 White Album, Part 6 (ホワイト・アルバム その⑥, Howaito Arubamu Sono 6), originally The Resolve of Blood!! (血の覚悟!!, Chi no Kakugo!!) in the WSJ release, is the seventy-fifth chapter of Vento Aureo and the five hundred fourteenth chapter of the JoJo's Bizarre Adventure manga.

Ghiaccio takes the disk with him, and Mista desperately rushes toward him for an impossible fight. Giorno suddenly shouts at Mista, and reopeing his own wounds, Giorno sprays blood around Ghiaccio, revealing the weaknesses in White Album Gently Weeps. Mista then positions Sex Pistols and ricochets his bullets on a metal pole, bypassing the defenses of Ghiaccio and reaching the airhole.

Ghiaccio reveals that it is sealed, and that he breathes by inserting the frozen air into his armor. He bounces the six bullets back at Mista, injuring him severely. Mista planned that far, and covers Ghiaccio's helmet with blood, which freezes and blinds him. Mista reloads and empties his revolver again on Ghiaccio's face, making him trip. Ghiaccio then falls toward the metal pole and impales his nape on a sharp shard of metal sticking out of it.