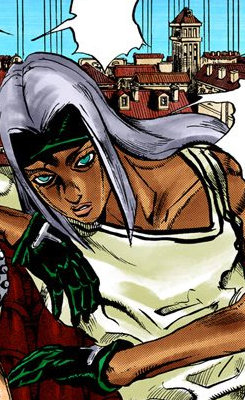 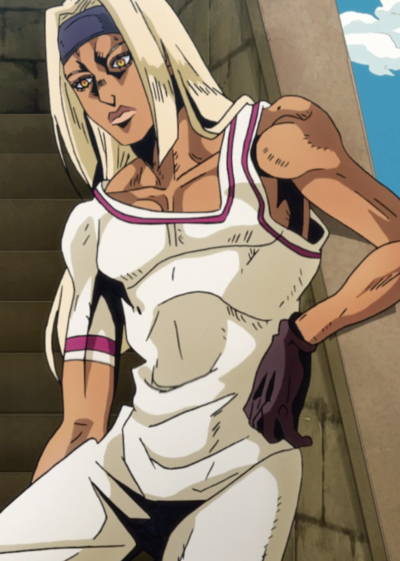 He is also a primary ally in the light novel testimone di gangster.

Tizzano and Squalo
Tizzano is a tactical and level-headed assassin who works alongside his partner Squalo. Compared to Squalo, Tizzano is much calmer and much more attentive in treacherous situations, such as their fight against Narancia. Tizzano is presented to have a deep bond with his partner, willing to take damage from Aerosmith in order to assure his safety.

Tizzano used to be a member of Passione like any other, and his fellow gangsters would often mock him because his Stand Talking Head was physically weak. Instead, Tizzano relied on guile to fulfill his missions. Tizzano and Squalo were working together under one leader but were not yet familiar with each other when they were assigned the mission to stop a trial that would expose the true scale of Passione's drug trafficking operation to the public. The trial involved a member turned traitor named Pollo who decided to testify against the gang for the prosecutor, a famous and respected lawyer named Gilberto Falco.

The leader, an old-school gangster, wanted to assassinate Falco. However, Tizzano objected because it would be tantamount to admitting the guilt of the 32 defendants who were actually members of the gang. Instead, he proposed to make Pollo rescind his testimony in the middle of the trial to ruin Falco's reputation. The leader accepted the proposition but it incurred his wrath. Although the leader told Squalo to assassinate Tizzano, the latter didn't care.

Tizzano and Squalo met a first time before the first hearing. In there, Tizzano showed that he thoroughly researched Pollo's background and discovered that he secretly had a half-sister that even Falco didn't even know about. He told Squalo of his plan of having this woman be abducted and then to have the lawyer defending the gangsters to secretly but ostentatiously show the sister's ring (which was a gift from Pollo) to the witness. This would put pressure on Pollo to falsely testify to the gang's advantage.

During the first hearing, Tizzano assists to the hearing posing as the assistant of the lawyer who defends the gangsters. The plan goes without a hitch and Pollo falsely testifies. The courtroom erupts into chaos because Pollo accuses Falco of making up the entire case. The judge postpones the second hearing. During the pause, Tizzano warns Squalo not to underestimate Falco. Tizzano tells Squalo that he will need to use Clash in the second hearing and they decide on signals so Squalo will know when to act. Squalo worries about his mission to kill Tizzano, but Tizzano reassures him and tells him to just pretend to swear his allegiance to their leader even if he doesn't mean it.

During the second hearing, Pollo's false testimony begins to ruin the reputation of Falco. Suddenly, Falco brings in another witness: Pollo's cherished half-sister. Reassured, Pollo decides to testify and tell the truth. At this moment, Pollo prepares himself and drinks a bit of water. The duo act at this moment and Squalo's Clash transports Talking Head into Pollo's mouth. Thus, Pollo is forced to tell lies and falsefully accuses Falco of using intimidation tactics on him to get him to make false accusations. Satisfied, Squalo kills Pollo by having Clash rip out his tongue. The judge attempts to call for a recess but Tizzano publicly accuses Falco. At this moment, Squalo's Clash is able to transport Tizzano's Talking Head into Falco's mouth due to him sweating heavily. Falco is also forced to confess to false crimes. Falco's reputation is ruined, but the prosecutor sees the duo, who are the only two calm men in the courtroom, and understands that they are the culprit. Falco bites off part of his tongue to be able to tell the truth and declares that justice will prevail at the end. However, Clash kills him.

Afterwards, Squalo and Tizzano meet again. Squalo has decided to kill his leader instead, having seen how clever Tizzano can be and how his abilities can be put to use for the gang while the leader is old-fashioned and incompetent.