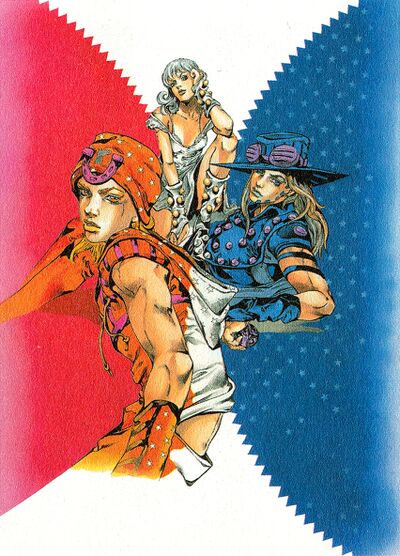 The Green Tomb (緑色の墓標, Midori-iro no Bohyō) is the eleventh story arc in Steel Ball Run.

At the 20th day of the 4th stage, there are 1920 racers left. Johnny and Gyro are a one day's ride from Kansas City. Johnny reminisces the fight between Gyro and Ringo, Gyro healed himself, Johnny and Hot Pants with Cream Starter, and unceremoniously leaves, as Johnny discovers that Hot Pants was secretly a woman but chooses no to reveal that. The duo crosses path with Pocoloco and Sandman, the latter of which warns Gyro of an incoming storm as a repayment for his technical victory in the first stage. Sandman also tells them that Diego has taken the routes with the least rivers, making Johnny realizes that Diego discovered the location of the next Corpse part, but also that Ringo sent a messenger pigeon to the American government.

Meanwhile Funny Valentine plots with his henchmen in Kansas City. Waiting for the messenger pigeon from Ringo, he covets the Corpse part, revealed to be the Spine, and summons Stand users to the city. Unbeknownst to Valentine, Lucy has been spying on him from across the street and thanks to her lips-reading skills, manages to understand what's happening. Witnessing Ringo's pigeon arriving on the roof, she infiltrates the governmental building under the pretense of giving Steven his mealbox and steals the message it carried. Almost surprised by Valentine and his henchman Blackmore, Lucy tries to hide but they both realizes that someone infiltrated the building and stole it. Trapped, Lucy has no choice but to call Mountain Tim for help and they both escape. Lucy then departs Kansas City to go retrieve the Spine at a local landmark known as the Green Tomb.

Blackmore follows the call to Mountain Tim to interrogate him, however Mountaim Tim attacks Blackmore. Tim is killed by Blackmore after a brief encounter, bested by Blackmore's ability to control to surrounding raindrops: Catch the Rainbow. Blackmore discovers that Lucy Steel was most likely the culprit, and rushes toward her location as she uncovers the Spine.

As Diego, Johnny and Gyro ride toward the Green Tomb, Lucy is discovered by Blackmore.[1]