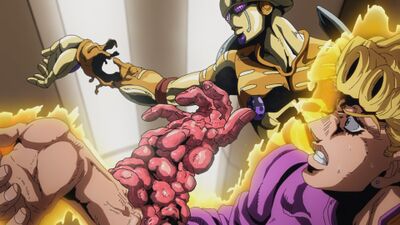 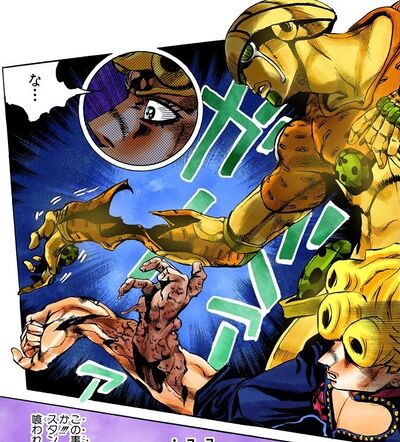 It narrates the battle between Team Bucciarati and the invincible Notorious B.I.G, and Trish's awakening of her Stand Spice Girl.

Bucciarati's group hijack a plane in Venice, with Leone Abbacchio and his Moody Blues serving as pilots. Mista sees an unknown man approach; warning him not to go closer, Mista shoots his leg. The man, Carne, then summons his Stand, Notorious B.I.G, but Mista's Sex Pistols drive several bullets through his head before he can use it.[1] Giorno confirms the assassin's death, and the group takes off.

In the middle of the flight, Giorno discovers that Notorious B.I.G still lives, and has attached itself to his arm.[2] Mista shoots off the infected arm, but suffers heavy damage: the Stand has caught three of his Pistols. Narancia suffers similar injuries after attempting to attack. Giorno deduces that the enemy is drawn to movement, and manages to throw the enemy out of the plane at the cost of his other hand.[3] With Giorno now unable to heal, Bucciarati leaves to inform Abbacchio of their losses.

Alone in the cabin, Trish is attacked by Notorious B.I.G, who has caught up to the plane. The Stand abruptly diverts its attention away from her, causing her to realize that a brooch Giorno dropped is transforming into a hand.[4] The situation pushes Trish into awakening her Stand, Spice Girl.[5]