This is a list of vehicles appearing in JoJo's Bizarre Adventure and related medias.

The vehicles featured in this list do not have enough information to justify an article, mainly due to lack of relevance, but are still notable. Throughout the series, several characters have their own unique vehicles, some of which have appeared in various covers and video games. 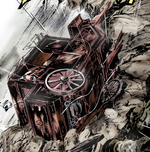 Manga Debut: Chapter 1: Prologue
Anime Debut: Episode 1: Dio the Invader
A carriage that George Joestar I, Mary Joestar, and their baby son Jonathan Joestar ride together in 1868 on a rainy day. The carriage slips off of a cliff, killing the driver and Mary.
Dio's Carriage

Manga Debut: Chapter 1: Prologue
Anime Debut: Episode 1: Dio the Invader
A carriage that Dio Brando rides to the Joestar mansion when he moves there.
Coaster Wagon 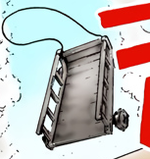 Manga Debut: Chapter 8: The Stone Mask, Part 1
Anime Debut: Episode 2: A Letter from the Past
A carriage that Jonathan Joestar takes to go to Ogre Street.
Speedwagon's Steam Wagon

Manga Debut: Chapter 17: The Birth of DIO
A steam wagon owned by Robert E. O. Speedwagon. The Kempo Fighter drives it with Tattoo and another friend accompanying them as Speedwagon goes to visit Jonathan in the hospital. It was omitted in the anime.
Will's Father's Ship

Manga Debut: Chapter 20: Jack the Ripper and Zeppeli the Strange, Part 3
Anime Debut: Episode 4: Overdrive
A ship owned by Will A. Zeppeli's Father. It was headed to Mexico to excavate an underground Aztec ruin.
Windknight's Lot Carriage 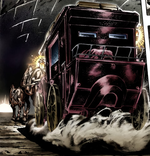 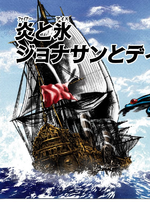 A ship sailing on the Atlantic Ocean, headed to America. Jonathan and Erina board the ship for their honeymoon. It is infiltrated by Dio Brando and Wang Chan who turns the majority of passengers into zombies. The ship eventually explodes, with no survivors aside from Erina, a baby, and Dio.

Manga Debut: Chapter 45: Joseph Joestar of New York, Part 1
Anime Debut: Episode 10: JoJo of New York
An airplane owned by Robert E. O. Speedwagon, which he takes to visit Straizo. They then use it to go to Mexico to investigate Stone Masks.
Hijacked Plane

Manga Debut: Chapter 46: Joseph Joestar of New York, Part 2
Anime Debut: Episode 10: JoJo of New York
An airplane owned by Robert E. O. Speedwagon when Joseph Joestar was 13 years old. The plane was hijacked by a group of criminals who wanted Speedwagon's money. Joseph causes the plane to crash, but saves himself, Speedwagon, and the pilot.
Impatient Driver's Car

Manga Debut: Chapter 47: Joseph Joestar of New York, Part 3
Anime Debut: Episode 10: JoJo of New York
A "Zuom" car owned by a driver who yells at Joseph to get out of the way. Joseph forces him to drive them to a downtown New York Italian restaurant. In the anime, the man is changed to an actual taxi driver and his car has a taxi sign.
Joseph's Motorcycle

motorcycle owned by Joseph Joestar, which he drives to Mexico to rescue Speedwagon.
Mark's Car 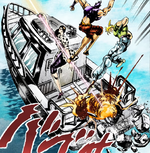 Manga Debut: Chapter 76: Ripple Teacher Lisa Lisa, Part 6
A boat from Air Supplena Island which Lisa Lisa, Joseph, and Caesar use to travel. While they're on the boat, Lisa Lisa demonstrates the power of the Red Stone of Aja, which destroys a part of the boat's stern. It is omitted from the anime.
Caesar's Car 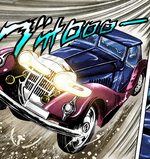 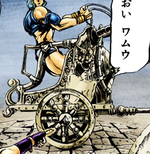 Carriages pulled by Vampire Horses which Wamuu and Joseph ride on for their Skeleton Heel Stone race.

Manga Debut: Chapter 110: Kars the Ultimate Being Is Born, Part 2
Anime Debut: Episode 25: The Birth of a Superbeing!!
A plane which Rudol von Stroheim and his group of Nazis bring to Piz Berlina Ruins. Joseph hijacks it so that he could lure Kars away to Vulcano Island. The plane eventually crashes Kars into the lava lake at the center of Vulcano Island.
Alitalia Plane

Manga Debut: Chapter 113: The Man Who Crossed the Atlantic
Anime Debut: Episode 26: The Man Who Became a God
An Alitalia

plane that Joseph boards from New York to Tokyo

so that he could visit his daughter, Holy, and grandson, Jotaro.

A cruiser found off the coast of the Canary Islands

, on the Atlantic Ocean

. It is here that, 100 years ago, the Vampire DIO was imprisoned at the bottom of the ocean. A group of treasure hunters retrieve the coffin in which DIO was stuck and free the Vampire. 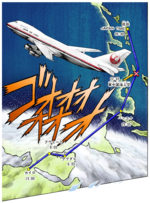 passenger plane that was headed from Japan

. Unfortunately, the heroes are attacked by Gray Fly and his Tower of Gray. Tower of Gray is defeated, but not before the pilots are slaughtered. Joseph Joestar is forced to attempt an emergency water landing.
Captain Tennille's Ship 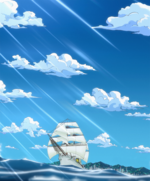 , across the South China Sea

. However, it was infitrated by the Impostor Captain Tennille, who is defeated but sabotages the boat, making it explode. The heroes and the crew are forced to evacuate the sinking ship.
Disguised Freighter 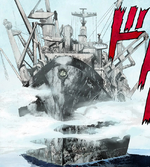 Manga Debut: Chapter 130: Strength, Part 1
Anime Debut: SC Episode 7: Strength
A massive freighter which is in reality a small, old ship which has the stand Strength bound to it, allowing Forever complete control over it. When Forever is defeated it turns back into the original ship that the stand was bound to.
Singapore Cable Car 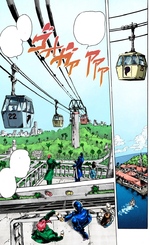 across the Keppel Harbour

. It opened in 1974 and was the first ropeway system in the world to span a harbour. It is here that Rubber Soul reveals himself and fights Jotaro Kujo.
Train to India 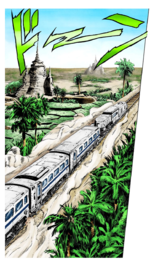 . The Joestar Group take the bus with Nena to this city.
Delhi Car

to the border of Pakistan

. They border the Himalayas and tus the landscape is very mountainous with winding roads and dangerous crevices. The Joestar Group is harrassed by Wheel of Fortune on the way to Pakistan.
Karachi Carriage

Manga Debut: Chapter 179: High Priestess, Part 1
Anime Debut: SC Episode 22: Judgement, Part 2
A submarine Avdol bought under the guise of a rich Arab so that the Joestar Group could cross the Red Sea unnoticed and reach Egypt. Unfortunately, High Priestess invaded the submarine and damaged it, forcing the Group to evacuate the submarine. It subsequently sank to the bottom of the sea.
SPW Helicopter 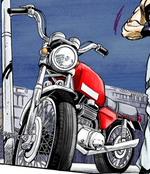 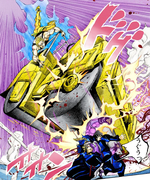 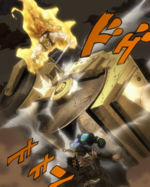 A road roller lying somewhere in Cairo. DIO uses it in the final battle by stopping time and jumping high in the sky with it to land on Jotaro, attempting to crush him with it. The road roller remains a fairly iconic item of the series and is often associated with DIO.

(written Zophyr in the manga) motorcycle belonging to Okuyasu Nijimura. When Josuke, Koichi, Jotaro and Okuyasu try to meet away from electrical sources, Okuyasu arrives on his motorbike. However, Red Hot Chili Pepper has hidden in the bike's battery, allowing it to eavesdrop on the heroes' conversation. Red Hot Chili Pepper tries to flee on the motorbike but Okuyasu catches up to it and destroys it.
Otoishi's Miniature Plane

which Akira Otoishi planned to use to get his Stand Red Hot Chili Pepper to Joseph Joestar's boat in three minutes. It can go as fast as 150kmph.
Rohan's Bike 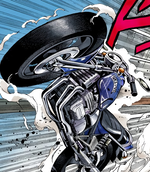 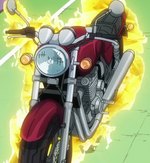 (written Zophyr in the manga) motorcycle belonging to Rohan Kishibe. Rohan takes the bike to investigate the room in Twin Forest tunnel. Josuke later ends up using this bike in the chase with Highway Star. 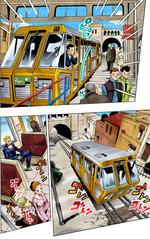 Naples' funicular, allowing the inhabitants to go up and down the city's slopes without moving. Bruno Bucciarati fights Giorno in the city's funicular.

A boat that Bruno Bucciarati rents in order to lead his team to Capri. It is covered with a second boat by Mario Zucchero and the theater of the fight between Bruno and Leone Abbacchio against Zucchero. 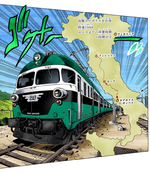 An express train to Florence via Rome. Team Bucciarati board it, hidden in Coco Jumbo. However, Prosciutto and Pesci attack it to find Trish. It is temporarily stopped during the fight and Team Bucciarati leaves. Melone boards it to find a suitable mother for his Baby Face and the train does arrive in Rome.

Manga Debut: SO Chapter 20: Prisoner of Love
A mini-submarine Jotaro acquired from the Speedwagon Foundation. Positioning it near the island where Green Dolphin Street Prison is situated, Jotaro planned to break Jolyne out of prison and then escape with it. However, Jolyne decided to let Jotaro go alone and stayed in order to find whoever stole Jotaro's Star Platinum and memories.
Romeo's Helicopter

Manga Debut: SO Chapter 113: Sky High, Part 2
The motorcycle which resembles a Bimota

KB2 on which Rikiel arrives to meet Jolyne. Later on in the fight Rikiel uses the motorcycle's gas to light himself on fire.

Manga Debut: SBR Chapter 7: Pocoloco and Sandman
An automobile. This machine is actually cutting edge technology in the 1890 and Baron Roocatugo thought he could compete in a cross-continental horserace with it. However, he discovers that this vehicle consumes one liter of gas per 400 meters, making it impossible to properly compete as it runs out of gas mere minutes after the start of the race.
Hot Air Balloons

Manga Debut: SBR Chapter 5: First Stage: 15,000 Meters
Hot air balloons are used during the Steel Ball Run race to follow the racers. Their number is unknown, but a presidential aide indicates that 36 of them were used during the 4th stage.[1] Officially, it is to watch over the racers and ensure their security. However, Valentine also uses them to spy on Johnny and Gyro. Because of the gas consumption, they go to ground when night falls and cannot advance against the wind. This makes the balloons an unreliable way to spy on the heroes.
S.S. Blue Hawaii

Manga Debut: SBR Chapter 72: Ticket to Ride, Part 2
A steamboat Funny Valentine uses to transport Lucy Steel and Steven Steel across the Delaware river to a nearby trainyard.
Valentine's Train

Manga Debut: SBR Chapter 73: D4C, Part 6
After he manages to gather all the Corpse Parts, Funny Valentine, Lucy Steel and Steven Steel embark on a train going from Philadelphia to New York, going near the New Jersey coastline.
Boat to Europe

Manga Debut: SBR Chapter 95: The World of Stars and Stripes - Outro
A boat leaving New York and going to Europe and Asia. It is notably crewed by the former Steel Ball Run Staff and among its passengers are Johnny Joestar, Norisuke Higashikata I and his daughter Rina Higashikata. The boat also transported the corpse of Gyro Zeppeli. Johnny and Rina meet on this boat and fall in love with each other.

. Josuke acquires its key in a bet, allowing Yasuho and Tsurugi to investigate the car's event data recorder with Paisley Park, leading Yasuho to Aisho Dainenjiyama.

Novel Debut: JORGE JOESTAR Chapter 7: Airplanes
Star Shooter (スターシューター, Sutā Shūtā) is initially a plane that George Joestar II builds when he is 16 years old using parts from the Motorizing 5 plane. It isn't completely finished yet, so George isn't able to fly it and compares it to a kite. Antonio Torres ends up using it to frame George by tying the plane to a corpse.

later, he makes modifications to a seaplane

and names it Star Shooter as well. It notably has a star symbol on the side. Its tail loses its wings in battle and George is forced to make a crash landing, leaving it behind in the North Sea. 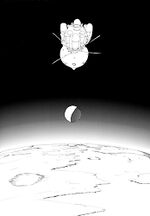 and lead by Captain and former President Funnier Valentine to travel to Mars' undiscovered "third moon". Jorge Joestar and Narancia Ghirga later board it to Mars with the help of Tsukumojuku Kato. It is spherical in shape with a diameter of about ten meters. A pair of two meter tall cylinders on both sides of the ship houses a dock with an airlock system that can connect with other ships as well as an emergency escape route. It is also equipped with space pods.

After discovering that Mars' third moon was actually The Eyed Balloon, President The Funniest Valentine orders the ship to head towards the entity and be detonated remotely to prevent Kars from entering Earth.