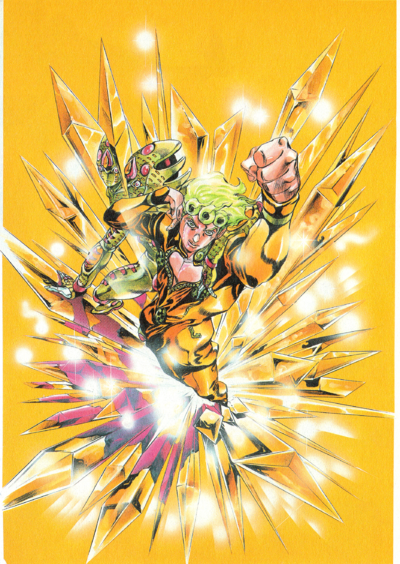 Giorno prepares to stab himself with the Arrow. Diavolo, back in his body and baffled at his failure, decides to temporarily retreat; however, when Trish senses his intent to flee, Diavolo uses Epitaph and sees a vision of Giorno failing to unlock Requiem. Confident in his prediction, Diavolo charges at Giorno.

Gold Experience stabs itself with the Arrow, but a hole appears in its chest and it collapses. Diavolo is overjoyed at Giorno's apparent failure, and King Crimson shatters Gold Experience's face. However, something inside Gold Experience is revealed as its shell is destroyed.[1] Diavolo attacks Gold Experience again, but only the shell remains, as Giorno and Gold Experience Requiem have appeared behind him.

Despite Gold Experience's evolution, Diavolo sees a vision of King Crimson punching through Giorno's chest.[2] Diavolo erases time and blinds Giorno with his blood, only to notice that his erased time is reversing. Gold Experience Requiem reveals to Diavolo its true power: to revert any action or will to zero. Diavolo finds himself back at the moment before he activated his time erasure, and his confusion allows Giorno to unleash a fatal barrage of punches on him.[3]

Diavolo is knocked into the Tiber, but has seemingly managed to survive. He crawls into the sewer to escape, but is fatally stabbed by a hobo. Diavolo then wakes up in an operating room and a city, where he is killed via dissection and being hit by a car respectively. In truth, Gold Experience Requiem has nullified his death: unable to reach the reality of life or the reality of death, Diavolo is now trapped in an eternal purgatory of repeated fatal injury.[4]

As Mista and Trish run off toward the Colosseum, still convinced that Bucciarati is back in his own body, Giorno sees the spirits of his dead friends in the sky, reassuring him that the act of setting fate free is a complete victory. He then sees the Arrow, which has detached itself from Gold Experience and now lies on the floor.[5]