A summary of Enrico Pucci's history and movesets in video games. 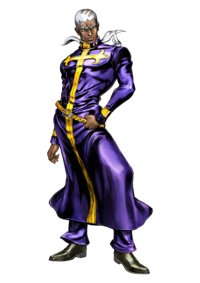 Pucci makes his first video game appearance in All-Star Battle and is the only villain playable from Part 6, voiced by Sho Hayami, who had voiced another follower of DIO, Vanilla Ice in the Capcom fighting game. He was confirmed for the game alongside Dio Brando (Part 1).

Along with Hol Horse, Kosaku-Kira, Johnny Joestar, Koichi Hirose and Giorno Giovanna, Pucci is a character who can utilize more than one Stand during a match as part of his moveset and is the only character who can utilize three Stands. As one of the mass majority of playable characters in the game with the "Stand" Style, Pucci can turn his Stands on/off, changing movesets, as well as having access to the Stand Rush ability returning from the Capcom game, being able to attack in conjunction with C-Moon only. Pucci has 900 HP.

During battle, Pucci can use many abilities of his featured in Stone Ocean.

Pucci can summon or dismiss his Stand, altering his available abilities.

Pierced through the finger

Having stuck a cross under his index finger's nail, Pucci stabs forward with it at slightly enhanced ranged. A command normal that can chain into Pucci's skills. (Comboable)

Whitesnake or C-Moon lash out in a 5-hit punch combo, leaving the opponent crumpling. A command normal that can chain into Pucci's skills. (Comboable)

My body is the basis!

A counter. Pucci and C-Moon pose, bracing themselves for attack. If struck by a non-Throw/HHA/GHA melee attack, C-Moon shifts gravity to blast the opponent, making them suddenly fall away from Pucci and sending them into the stage wall.

Exclusive to Pucci and relevant to him for as long as he has Whitesnake. 14 rhombus units are displayed above the Heart Heat Gauge. When one is filled via the "14 words", it turns from light grey to purple, and filling all 14 will evolve Whitesnake into C-Moon.

Pucci pulls out the Green Baby and begins speaking the fourteen phrases to it at a steady rate, in order to progress towards evolving Whitesnake into C-Moon. Each phrase spoken fills one of the units of the Green Baby Gauge. Holding down the button input allows Pucci to speak more than one word at a time before putting the baby away. A small amount of Pucci's Heart Heat is immediately consumed to perform this ability, but any subsequent words spoken to the Green Baby within the same usage do not cost extra. Pucci is vulnerable to attack while this skill is in effect, but may Flash Cancel to mitigate his recovery.

Throw
Weep at your own weakness!
2 ATK buttons at close range or

Pucci lifts the opponent up by their face with one hand, before pulling them into a forceful knee-butt to the face and throwing them to the ground.

Special Moves
I order you!

Pucci spins around and flings a DISC straight forward as a projectile. The DISC's speed is determined by the attack button inputted. (Flash Cancel comboable)

Pucci begins matches with Whitesnake as his Stand.

When Pucci steals the opponent's DISC via "It's mine!" or his HHA, their special skills and Style Button-related abilities (with the exception of Stand ON/OFF and Mounting/Dismounting) are locked away in the form of "the DISC":

The DISC will be in Pucci's possession until his opponent hits him, causing it to drop in front of him and allowing it to be picked up by either combatant via crouching over it. Pucci can retrieve the DISC to keep the opponent's Style locked, or the opponent can retrieve it and restore their abilities.

You shall be crucified!

Pucci summons Whitesnake to deliver a forward chop. If it connects, the opponent is bounced off the ground before Whitesnake moves in and chop them again. This skill cannot be Flash-Cancelled once Whitesnake begins its second chop. (Flash Cancel comboable)

A command Throw. Whitesnake swings its arm forward, and if it connects, will pick the opponent up and rip out their DISC while throwing them to the ground.

A counter. Pucci poses with Whitesnake as he raises his arms in hallelujah. If struck by a non-Throw/HHA/GHA, Whitesnake reveals it has already put the opponent under an illusion via its Melt Your Heart ability, stunning them as the two fade away. The real Pucci and Whitesnake appear already behind the opponent as the opponent crumples to the ground, open to attack. (Comboable)
Each individual character has a unique animation for falling victim to this attack, similar to Giorno Giovanna's HHA.

If Pucci completely fills the Green Baby Gauge completely by way of the "14 words" ability, the Green Baby will fuse with Whitesnake as Pucci grins, evolving it into C-Moon. Pucci's appearance is altered and his abilities will change accordingly.

A status effect that is inflicted when any skill marked with a star (☆) connects. The opponent is affected by C-Moon's gravity-altering effects, and they slowly lose health as their bodies are turned inside-out. While in effect, the opponent's torso visually has blood continuously spewing out.

Pucci summons C-Moon forward to strike the ground, causing three pieces of projectile debris to be sent upwards in different directions and launching the opponent if they are hit. The attack button inputted determines how far C-Moon moves before performing the maneuver. This skill functions as an anti-air. (Flash Cancel comboable)

C-Moon performs a devastating, unblockable uppercut that sends the opponent flying. A Stand Rush skill that Pucci can disconnect from to freely act while it is executing.

After a short delay, C-Moon punches it fists together in an unblockable attack. If the opponent is caught, they will be left crumpling to the ground and vulnerable. A Stand Rush skill that Pucci can disconnect from to freely act while it is executing. (Comboable)

+ 2 ATK Buttons ON GROUND (Whitesnake only)

Pucci and Whitesnake fly forward a moderate distance. If they connect with the opponent, Whitesnake rapidly swipes its hand across the opponent's face, causing their DISC to eject from their head. It will then quickly steal the DISC and roundhouse-kick them away.

Pucci, using C-Moon's gravity-altering ability, attempts to float with his Stand on debris skyward. If left uninterrupted for a few seconds, bright light with bathe Pucci completely, shining out of different parts of his body including his eyes. In a bright flash, Made in Heaven appears and rushes from behind him, and Pucci and his newfound Stand rapidly zip around the sky in streaks of light before landing, prepared to finish the battle.

After evolving his Stand into Made in Heaven, the stage will move into outer space, with the stage walls and background being a road made out of light representing the rapidly changing universe, making this the only stage that cannot be readily accessed from the Stage Select menu.

While in Made in Heaven Mode, the battle timer will tick three times as fast, Pucci will move at double his speed, and the opponent's own speed is halved; This means that Pucci moves at effectively four times the speed of his opponent. His attacks with Made in Heaven are not only excellent combo abilities, but too fast for a human opponent to react to. Due to the opponent's own slowed nature, they will also fall more slowly to ground when knocked into the air, making extended combos much easier to execute for Pucci. Although he can dismiss Made in Heaven, it will only leave him with his usual set of skills; All of Pucci's new abilities are only available when Made in Heaven is active.

Made in Heaven is not entirely infallible. Most notably, it can only be successfully activated once per match and becomes permanently unavailable after the round ends; Pucci begins the next round with C-Moon again, and the stage will return to its original form. Special animations performed by the opponent such as Throws, HHA, and GHA, temporarily return them to normal speed until the animation in question ends. Due to the rapidly accelerated timer, it is very common for the round to end via Time Up, which can result in the transformation backfiring on Pucci if he has less health than his opponent.
Lastly, if he is somehow struck by the Bites the Dust GHA of "Kosaku Kawajiri", Pucci's Stand will revert all the way back to Whitesnake; Though he may work his way back to C-Moon through the Green Baby Gauge and 14 words, Made in Heaven will remain lost to him as according to the once-per-match rule.

The only character who does not suffer from Made in Heaven's slowing effect is Giorno Giovanna with Gold Experience in Requiem Mode.

Pucci and Made in Heaven charge forward at incredible speeds before unleashing a large slashing strike that knocks the opponent off their feet. (Comboable)

Pucci and Made in Heaven suddenly flash and directly and instantly reappear at the opponent's location from any distance. The attack button inputted determines where they appear in relation to the opponent. (Comboable)

While in mid-air, both Pucci and Made in Heaven fling five knives straight in a direction as projectiles. The knives strike as a middle attack that cannot be blocked crouching, and the direction they're thrown is determined by the attack button inputted. (Comboable)

Of note is that the design of the knives are similar to those thrown by DIO.

Pucci also appears as a background character and the Situation Finish for the Green Dolphin Street Prison stage, provided he himself is not at least one of the two combatants. If a character were to be defeated in the direction of the gate where Pucci is standing, Whitesnake will appear and steal the loser's Stand/Memory DISC similar to the chapter scene when Whitesnake obtains Jotaro's Stand DISC from Jolyne.