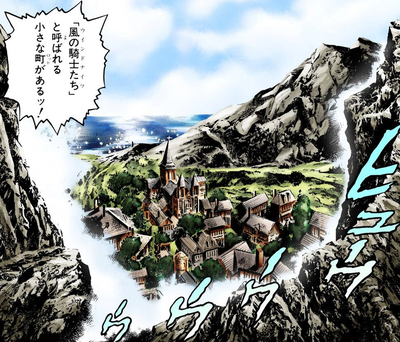 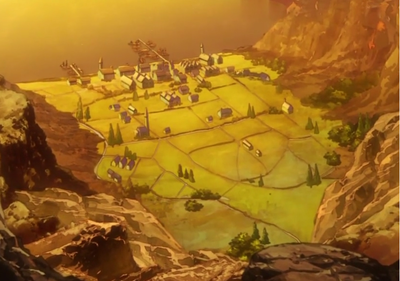 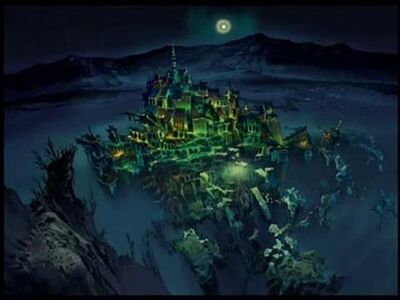 It is located south of London, about a day away by horse. Most of the battle between Jonathan Joestar and Dio Brando's zombies takes place here, with the final battle between Dio and Jonathan set in a castle on a hill nearby. The town had 452 citizens, but after Dio's sudden takeover, 73 of them are transformed into zombies. The trial of the 77 Rings was held here during the Middle Ages for training knights. 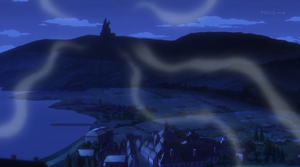 Windknight's Lot, with Dio's castle visible atop the nearby hill.

Windknight's Lot is surrounded on three sides by inaccessible mountains. The southern side has a cliff that overlooks the sea. The town was built in the middle ages as a practice ground for royal knights. Coal is excavated via an extensive railway system dug by prisoners. The residents of this place are normal people who live by fishing and agriculture.

Chamber of the Two-Headed Dragon

The Chamber of the Two-Headed Dragon (双首竜の間, Sōshuryū no Ma) was a training ground where warriors learned how to kill. Filled with traps, it was used for deathmatches between the knights, the most notable combatant being Tarkus. One type of deathmatch was the Chain Neck Deathmatch (チェーンデスマッチ, Chēn Nekku Desumatchi), in which both warriors are trapped each in one neck brace connected to the ceiling through a chain, each collar with one key that opens the other one. The only way to free oneself is to kill the opponent or decapitate him in order to pick the key to his own collar. As the room contains a mechanism to automatically chain whoever enters the room, one could lure the desired opponent into the room and trap them inside. To prevent escape in the middle of the fight, the steel door to the room is locked when both fighters have their necklaces. The only way to open the door is to pull a lever present inside. This also prevents others outside from interrupting the deathmatch, as the door is strong enough to withstand several attacks. Ripple users have difficulty in this challenge because the necklace chokes them, making it hard to maintain their breathing. They also can't channel their Ripple through the chain, as it is connected to the ceiling instead of the opponent.

On the right side of the path after the entrance tunnel, a steep cliff overlooks a lake. Atop this cliff is the town's graveyard, where Jonathan and company encounter a revitalized Dio and battle his zombie servant Bruford. The graveyard is marked by several tall rock formations. A Victorian-era castle, where Dio resides during his time in the town, overlooks the graveyard. The Stone Mask hangs upon the wall of one of its rooms. On the top floor, an attic with an ornate window serves as the backdrop for Dio's conversation with Poco's sister and the following battle with Doobie. The attic contains a door to a large hall with a chandelier and several pots of roses. Jonathan and Dio's climactic confrontation takes place in this hall, with Dio ultimately being thrown off one of the room's balconies.