Man in the Mirror and Purple Haze, Part 1 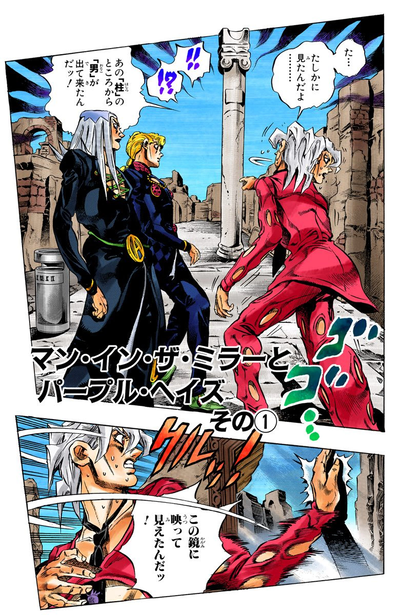 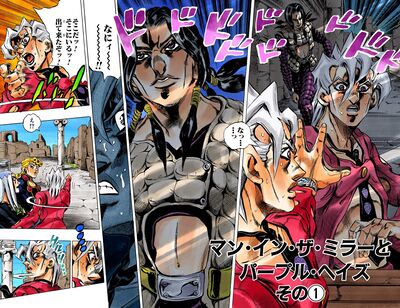 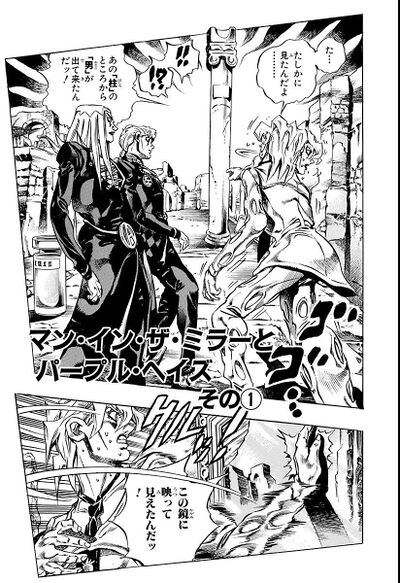 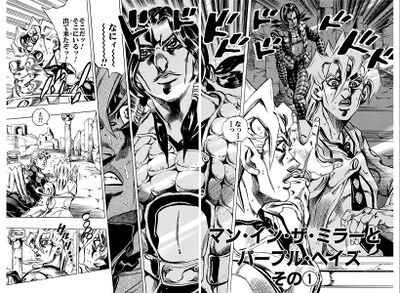 Man in the Mirror and Purple Haze, Part 1 (マン・イン・ザ・ミラーとパープル・ヘイズ その①, Man In Za Mirā to Pāpuru Heizu Sono 1), originally One by One! (ひとりずつ！, Hitori Zutsu!) in the WSJ release, is the fortieth chapter of Vento Aureo and the four hundred seventy-ninth chapter of the JoJo's Bizarre Adventure manga.

Fugo stares at the pillar behind him, unable to understand where the man went. He looks back into the mirror, and sees the man continuing to approach the group. Abbacchio and Giorno stand there confused, not sure why Fugo is freaking out. The man in the mirror reveals his Stand and prepares to attack.

Fugo warns the others, but they don't understand what he's talking about as they are unable to see the man in the mirror. Fugo pushes the two out of the way, and the two vanish. Fugo, now alone, gets worried as he can't see the enemy anymore. The enemy appears and punches Fugo in the face, and proceeds to recite Fugo's life story.

Fugo asks what happened to Giorno and Abbacchio, but then notices that his watch is mirrored, along with the rest of the world. Fugo realizes that it was he who vanished, not his friends. The man from the mirror, Illuso, interrogates Fugo, asking him why he's in Pompeii. Fugo refuses to answer, causing Illuso to attack. Fugo boldly states that Illuso will be the one to die by the hands of Purple Haze.