The Mystery of King Crimson, Part 6 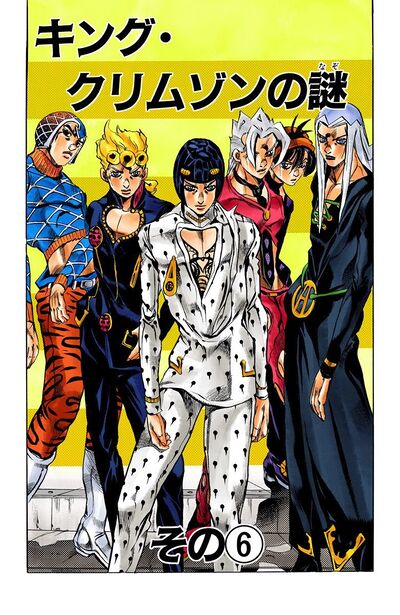 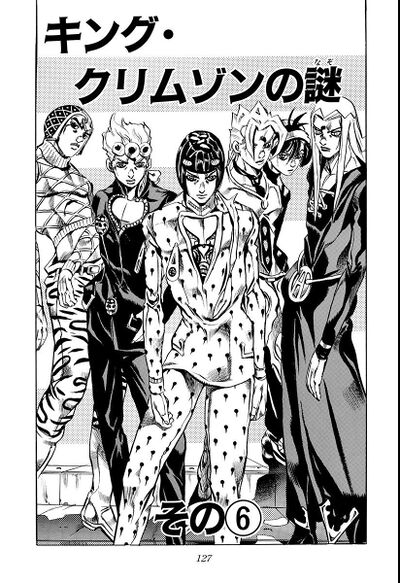 The Mystery of King Crimson, Part 6 (キング・クリムゾンの謎 その⑥, Kingu Kurimuzon no Nazo Sono 6), originally Who Will Board the Boat?! (ボートに乗るのは!?, Bōto ni Noru no wa!?) in the WSJ release, is the eighty-fourth chapter of Vento Aureo and the five hundred twenty-third chapter of the JoJo's Bizarre Adventure manga.

Bucciarati explains that the Boss wanted Trish dead because she could lead to him, and that Bucciarati chose to no longer serve such a man. He invites his ex-squad members to go on the boat with him and join him in his rebellion. Save Giorno who was cooperating from the beginning, all step-down and look away in fear. Fugo explains that everyone knows that this rebellion is doomed and that not joining Bucciarati is the most logical solution.

However, Abbacchio is the first to join, saying that he feels only at peace around Bucciarati; he is followed by Mista who says that he knows Bucciarati and that he's certain they'll pull it out, to Fugo's bewilderment. Narancia for his part, is torn between terror and his wish to follow Bucciarati, asking him to order him to join. Bucciarati refuses, telling Narancia that this is a choice he has to do himself. The rebels leave, and as Fugo expresses his abashment that anyone would rebel for the sake of a girl they've only just met.

Narancia sees Trish's injured arm, and understands that both share that pain of having been betrayed by people who were supposed to love them. He then hurriedly swims toward the boat, begging Bucciarati to take him. All the traitors are happy to see Narancia join, save Giorno who's joy is diminished greatly as he notices that Bucciarati has no pulse, making him effectively dead.

In Venezia, a call is made to Passione operative Squalo, informing him to take on Bucciarati and Giorno and bring them to the Boss alive or dead.