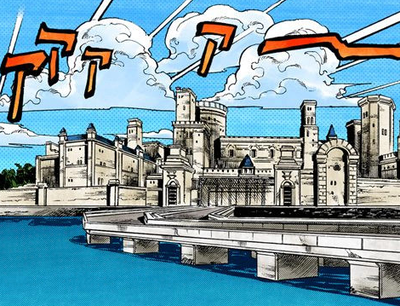 Green Dolphin Street Prison (グリーン・ドルフィン・ストリート刑務所, Gurīn Dorufin Sutorīto Keimusho), also known as G.D. st Jail (G.D.st刑務所, G.D.st Keimusho), and The Aquarium (, Suizokukan),[1] is the main setting of the first part of Stone Ocean. It appears to be a unisex prison, though the genders are separated by dorms.

Located in the United States in Port St. Lucie, Florida, Green Dolphin Street Prison is a maximum security prison facility, unique in the fact that it is built offshore on an island, preventing its detainees from ever escaping to the mainland. Because of this, it is also known as "The Aquarium." While such a concept for a detainment facility has been used before the introduction of Green Dolphin Street, the prison boasts a large property area, and due to the rather rough and humid Florida environment and ecosystem, as well as the well-equipped and funded facility, the detainees will not find escape possible.

According to one of the inmates, the prison has several mysteries. 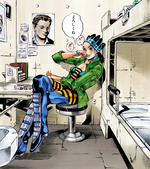 Manga Debut: SO Chapter 4: Prisoner FE40536: Jolyne Cujoh, Part 1
Prison Cells (囚人監房, shūjin kanbō) are small rooms where inmates are held in Green Dolphin Street Prison. In each cell contains a writing desk, bunk bed and toilet. Some cells contain books and posters owned by inmates. Every prisoner is assigned a roommate to share their new prison life with. To avoid complications, prisoners are only paired with roommates that have been determined to be compatible with them.[5]
Phone Booths

Manga Debut: SO Chapter 4: Prisoner FE40536: Jolyne Cujoh, Part 1
The phone booths of the prison available for the inmates. Used to call the exterior of the prison. Since all inmates want to use them, the phones are reservation only and the wait is usually a month long before an inmate can use the booths. That is one of the "seven wonders" of the prison. Of course, paying another inmate to free their phone time is possible.[3] The phone calls are recorded and all metadata like the destination of the call or length are also recorded. This allows Pucci to spy on Jolyne's call with the Speedwagon Foundation.[6]
Dining Hall / Cafeteria

Manga Debut: SO Chapter 4: Prisoner FE40536: Jolyne Cujoh, Part 1
The area where the inmates are served food and where they eat. One is situated right in the middle of the women's quarters near the cells. Simply put, a set quantity of food is served while the inmates get in line with trays and portions are served. There is usually enough food for everyone but inmates can take double portions and anyone arriving late is left starving. Inmates that work on outside facilities are given their lunch there at breakfast.[2] The food is quite varied and high quality, including boxes of milk, fresh fruits like bananas or even salmon.[7] Alternatively, set lunches are served in boxes and all inmates must present a meal ticket to get one.[8]
Farm

Manga Debut: SO Chapter 4: Prisoner FE40536: Jolyne Cujoh, Part 1
Green Dolphin Street possesses farmlands where inmates can work. The farmlands are situated near a swamp and there is an on-site barn where most of the farming equipment, including a tractor, is stored. Most importantly, it is the hiding spot for all of Enrico Pucci's Stand DISCs. The DISCs are hidden in the wheel of a tractor and F.F. used to be their guardian.[9]
Library

Manga Debut: SO Chapter 10: Green Dolphin Street Prison
The library is one of the recreational areas of the prison. It naturally contains books, from classics like "The Count of Monte Cristo" in French apparently[3] or comic books. There is also a TV set and the inmates can watch movies[10]
Visiting Rooms

Manga Debut: SO Chapter 11: The Visitor, Part 1
The visiting rooms, where people from the outside can come visit the inmates. A typical visiting room has a table and several chairs for the inmates and the visitor(s). There are two doors, one for the visitor(s) leading to the exit,[11] one for the inmates leading to the cells. The rules of the visits are the following: each visit lasts up to 30 minutes tops, holding hands is allowed but kissing or getting naked is prohibited. Any conversation is recorded, foreign languages are prohibited and the staff can prematurely cancel the visit because of the topics of discussion.[12]
Medical Office

Manga Debut: SO Chapter 21: Ermes' Sticker, Part 1
The medical facility of the prison is equipped with a large visiting room where the doctor can examine each new inmate[13] and even a bedroom were sick inmates can rest.[14]
Toilets 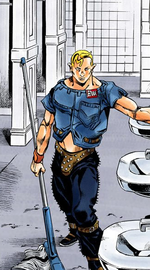 Manga Debut: SO Chapter 22: Ermes' Sticker, Part 2
Public restrooms for personal relief. Nothing too interesting happens there except for the time Ermes confronted McQueen for the first time.[15]
Unknown Room 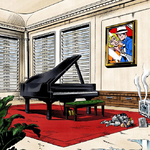 Manga Debut: SO Chapter 24: Ermes' Sticker, Part 4
A music room hidden behind an invisible crack on the wall of a staircase in Green Dolphin Street Prison. Its most defining features are a grand piano complete with a seat standing at the center over a large carpet and a Lichtenstein print on the wall. The room also incorporates a chair and a small table on which lies a plate with a can and a glass of orange juice and a Mars chocolate bar.[16] Other pieces of furniture include various drawers and shelving units which hold several books and miscellaneous objects.
Recreation Grounds 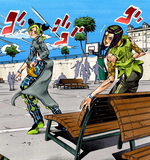 Manga Debut: SO Chapter 34: Marilyn Manson, the Debt Collector, Part 1
A large open courtyard, complete with basketball courts and benches. The inmates are lent recreational items like basketballs, baseballs and gloves.[17] If "outdoor time" is over, the prisoners are required to give everything back to the guards, but one can bribe them to have a little more time.[18]
G.D. Store 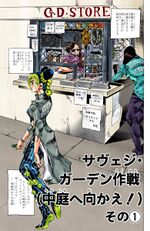 Manga Debut: SO Chapter 40: Savage Garden Strategy (Head for the Courtyard!), Part 1
Inmates can spend their money at an on-site store that sells non-essential items to the inmates. Examples include: diet gum at 85c, shampoo at $2.85, sports newspapers, TV sets, boomboxes, baseball gloves, make-up, shoes, CDs, hair dye, mineral water, towel, soap and so on. For unknown reasons, Rolex watchs or Louis Vuitton bags are for sale here too. This is one of the seven wonders of the prison.[4]
Laundry Room

Manga Debut: SO Chapter 43: Savage Garden Strategy, Part 4
A large facility equipped with large machines. It is used to wash the inmates' clothes. It was the main battlefield of the fight between Jolyne, Weather Report and Lang Rangler.
Chapel 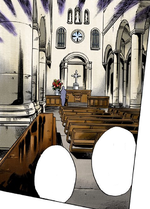 Manga Debut: SO Chapter 44: Savage Garden Strategy, Part 5
A place to worship God and seek spiritual redemption. It is equipped with several chairs and benches so that the believers can sit during the mass, and an altar with a cross. Enrico Pucci naturally dwells here often and it has become a place for meetings between Whitesnake and Sports Maxx.[19]
Courtyard

Manga Debut: SO Chapter 47: Savage Garden Strategy, Part 8
A rather large open courtyard. A revolving door is used as the gate into the courtyard and isn't locked since it's in the middle of the prison and inmates can't break out from there. A small monument resembling a mini clock tower is built at the center of the courtyard with staircases leading into it. It is unremarkable except for its status as the battlefield between Jolyne, Weather Report and Whitesnake.[20]
Mausoleum

Manga Debut: SO Chapter 52: Kiss of Love and Revenge, Part 2
An indoor graveyard where deceased prisoners are buried. It was the location of the battle between Ermes and Sports Maxx.[21]
Workshop 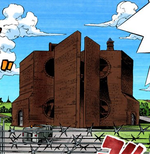 Manga Debut: SO Chapter 58: Ultra Security House Unit
The Ultra Security House Unit[19][23] (, Urutora Sekyuriti Hausu Yunitto, lit. Strict Punishment Isolation Ward) or simply Punishment Ward (厳正懲罰, Chōbatsu Bōtō) is a separate section of the prison designed to isolate prisoners who are unable to coexist with the rest. This includes those who are in need of protection, child murderers, and prisoners who are prone to violence or frequently try to escape. The facility is located on the southern section of the Men's exercise ground, situated 520 meters away from the Women's ward.[23]

The location is remarkably more austere than the ordinary living quarters. The inmates are confined in their cells 24/24 and they are washed with a waterhose. The walls of the cells are padded and there is only a window on the door. The toilets are squat toilets. The meal consists in a simple bread infested with insects and a cup of soup full of roaches.[19] A staircase leads to an execution room where inmates condemned to the death sentence are killed with an electric chair.[24]

Manga Debut: SO Chapter 79: Yo-Yo Ma Is Coming!, Part 2
The marshlands near the prisons, full of wildlife and covered in water. Jolyne and Anasui try to escape through here with Yo-Yo Ma and but are soon forced to let themselves to be captured. 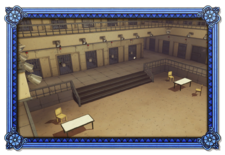