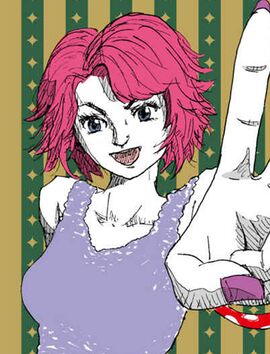 Penelope de la Rosa (ペネロペ・デ・ラ・ロサ, Penerope de ra Rosa) is a major ally featured in the light novel JORGE JOESTAR. She is from the Canary Islands

and helps George Joestar catch Javier Cortes, the mastermind behind fifteen locked room murders, after almost becoming one of Javier's victims. Forced to leave her home, Erina Joestar allows Penelope to live with them and Penelope starts working in the La Palma

office of Erina's trading company, Star Mark Trading. While living with the Joestars, she acts as an elder sister to George and tutors him.

She has a Wound ability that allows her to create locked rooms and hang whoever is trapped within. Although she is unaware of it, Penelope is also a Stand user, with the autonomous Stand Cube House which temporarily evolves into Arrow Cross House.

Penelope later moves to the 37th universe to reunite with her Stand and marries Jonda Joestar. She becomes the stepmother of Jorge Joestar37 and mother of Joeko Joestar.

Penelope is a slim woman of average height with youthful facial features. She has short wavy light hair kept up to her neck with side swept bangs. Her hair appears to grow longer when she is distressed or using her Wound ability.

She wears a striped sundress

over her shoulders. According to George, she is quite beautiful.[1] 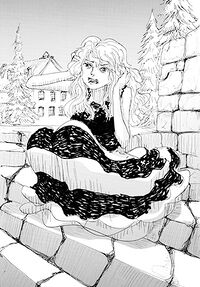 Distressed about the clown

Penelope has a worrisome, insecure attitude and is emotionally unstable. She initially has an extreme pathological fear of clowns. When seeing Javier Cortes appear in her dreams as a clown, she would become covered in a cold sweat, her heart would rapidly beat, her breath would grow shallow, and she would be barely conscious enough to think. Sometimes her eyes would even roll back into her head and she would faint, while still asleep and dreaming. She worries about harming other people with her ability and shuts herself in her room. Penelope was loyal to her abusive boyfriend, Edvard Noriega. Despite Edvard beating her up and selling anything she owned of value, Penelope would wait for him to come back to her. She is also regretful of blaming her mom for the divorce of her parents.

Enraged due to Edvard

Penelope slowly starts becoming more confident and braver after living with the Joestar family. However, she is also very violent, aggressive, and can go berserk. Seeing her boyfriend Edvard again enrages her to the point where veins bulge on her forehead, her lips curl back, she bares her teeth, and her nose starts bleeding. She becomes willing to actually kill someone when she is in this state.[1]

When they move to England, George describes her as seeming full of life and fun. She is protective of George and treats him like a little brother. Furious that he is still being bullied in England, Penelope threatens to summon her locked room clown ability on them.[3]

Penelope is also intelligent, as George says she explains concepts very well to him as his tutor. Penelope tends to start trouble with other women, getting aggravated when talking to Lisa Lisa and Darlington Motorize. She doesn't hesitate to use her locked room ability even on harmless women like Darlington because she thinks it is for the sake of protecting George.[4] Penelope admits if George had married anyone else aside from Lisa Lisa, she would feel jealous. Despite previously being at odds with Lisa Lisa, Penelope is ecstatic over the birth of George and Lisa Lisa's child and happy for their marriage.[5]

Penelope's constant fear of Javier Cortes appearing in her dreams dressed as a clown and manipulating her to create locked rooms to kill her mother awakens her Wound ability.

“
If you're not Penelope's friend, you'll have to hang yourself!
”
—Clown, JORGE JOESTAR Chapter 14: Desolation Row

Penelope's Wound activates when she is enraged, distressed, or afraid, causing the creation of locked rooms that entrap anyone in the surrounding area. 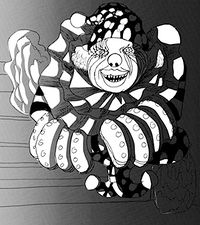 At first, Penelope could not control the ability and just standing in front of a door would cause all the doors and windows of that room to slam shut, becoming a locked room. A clown made of the threads of Penelope's clothes lurks inside the room. It is short and fat, with big white hair, white makeup, puffy white clothes, a round nose, and a hat. Inside its sclerae are stars instead of irises. It appears hollow and initially also has a thread hanging from its hip as well as a few cracks on its body with frayed edges. The clown takes any object inside the room such as a large table and wedges it under the doorknob so the door remains shut. However, with enough strength and repeated hits, it is still possible for someone on the outside to break in. The clown shatters into tiny pieces if it is directly attacked, but the room remains locked. 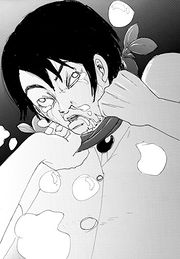 George hanging from the noose

The clown's noose drops down from the ceiling, wrapping the necks of the victims trapped inside the room and hanging them to death. As Penelope initially did not want to kill anybody, her Wound would also create a doll out of the threads of her clothes, and the doll would be hanged instead. The doll appears with no clothes, a shapeless face with white circles as eyes, and a wide open mouth stitched on. Somehow, the doll would also have blood streaming out of its mouth after being hanged. The doll could easily unravel with one tug of a loose thread hanging from its hip.

Six months later, Penelope overcomes her fears with the help of George, and upgrades her ability into a frightening weapon. She is capable of transforming anything in her environment into a locked room. For example, if Penelope is outside, dirt and grass could rise up into four walls to entrap someone.[1] She can even make the walls out of zombies.[6] The walls have no doors or windows, making it more difficult to either break in or out. The ability also no longer requires using her clothes, as the clown is formed from her environment. The walls are living and can recover itself to fill up any gaps or holes.

It is possible to escape from the locked room by breaking the idea of it being a locked room mystery. As the point of a locked room is to make murder look like suicide, George uses a knife to carve the word "MURDER" on his stomach. After the clown reads it, the ability dissolves.[1]

Her Wound eventually develops into having an extremely wide range, enveloping the entire world.[5] Penelope can have clowns protect Erina and their house while she is far away from home.[6]

Penelope's Stand subconsciously manifested in the far future, thirty-six universes later, as a way to search for George Joestar after his body disappeared in 1920. Cube House is a tesseract made of eight square rooms that allows its occupant to move indefinitely in any direction. Falling vertically through four doors in the center of Cube House allows one to travel through time. The Stand has its own personality with its main body appearing as a young girl named Reimi Sugimoto, who controls the house's walls.

Arrow Cross House is created around Cube House when Reimi accidentally pierces herself with the Arrow, developing its own Wound ability. Arrow Cross House appears as four arrows surrounding the north, south, east, and west walls of Cube House. Reimi could manipulate its walls and seal people beneath the building in a state between life and death for either her own safety or their protection.

Penelope also momentarily borrows the Stand U-Boat from Jorge Joestar, who loans its DISC to her so she can bring Erina to the final confrontation against Dio Brando.

Penelope's parents divorced in 1900 and her mother Isabella had full custody of her. Penelope blames her mother for taking away her father and their relationship becomes strained.