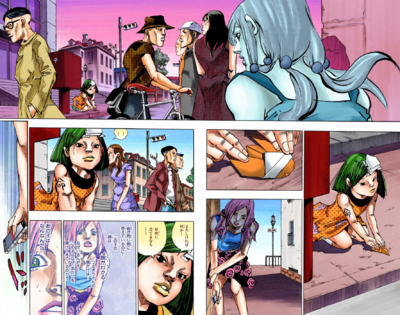 It narrates Yasuho's misadventure in the streets of Morioh, as Tsurugi Higashikata's Paper Moon King renders her unable to distinguish people's faces.

When the lights come on, Yasuho finds herself with Tsurugi Higashikata, playing with some origami in what Tsurugi describes as an earthquake shelter.

After playing with a fortune teller, Tsurugi acts impertinently towards Yasuho, and when she confronts the child, she realizes that Tsurugi is male. Tsurugi reveals that he, like his father Jobin Higashikata, his grandfather Norisuke Higashikata IV, and several more generations back, the first born son of the Higashikata family live as females until they are 12 years old, to ward off certain "evil spirits."

Paisley Park inspires Josuke to send Yasuho a coded message on Joshu's cellphone. Yasuho, unnerved and preparing to leave, realizes her phone is missing when it sounds off. When she finds it, it has been folded into an origami frog that leaps at her eyes, causing her face to split and contort. This effect subsides, and Tsurugi notes that she must have seen his Stand, which she does not quite comprehend.

Leaving the room, phone in hand, she spots another room. Looking in the window, it is small and austere, containing a set of clothes similar to that worn by Kira, and a collection of objects including an Enter the Dragon poster and Ultraman figurine, among others.

Yasuho heads back into town, trailed by Tsurugi. She speaks with a woman with a particular, angular face, who asks for directions. Another woman passes with the same face, as well as a window cleaner, the mannequins in the window, and everyone around her, except for Tsurugi.

Before she can consider this, she rubs her eyes, accidentally removing her contact lenses. Heading home and replacing them, she finds that even her mother has this same face, and finally her own reflection. She is taunted by the woman who she assumed was her mother.

Upset, she rushes out of her home to the street, crying. She looks up and sees Tsurugi, unchanged. She successfully calls Josuke, who agrees to meet within 10 minutes at Gomamitsu café, in reference to his message. Yasuho confronts Tsurugi once more, but he repeats that he will always be available to help her in that room in the basement.

Elsewhere, Josuke also steps on an origami frog, his foot contorting slightly; his senses now changed so that he can only perceive the same face that haunts Yasuho.

Mistaking a shop for Gomamitsu Cafe, Yasuho realizes that she has begun to interpret all words as parts of this phrase. Joshu finds Josuke, taking his phone back, angered that he had called Yasuho. Yasuho mistakes Joshu for Josuke, narrowly passing him by. Thrilled by Yasuho's trust, and misunderstanding her words, Joshu leads Yasuho to a public bathroom, where he reveals his genitals, and begins rapidly undressing her with his Stand. Pausing when Yasuho calls Josuke's name, she strikes his head with a cistern lid and escapes.

She approaches a car, mistaking its passengers' clothes for police uniforms, before she is kidnapped and nearly force-fed a pill. When Yasuho shouts to stop the car, Paisley Park is able to disrupt the ankle of the driver, crashing the car into a post. Stumbling away, Yasuho's mother approaches and calls to her, whom Yasuho again fails to recognize. When Tsurugi reveals himself again, Yasuho concedes and follows him back to his underground playroom.

Josuke deduces that he is no longer afflicted by Tsurugi's Stand because he has fallen out of its range, and that Yasuho was its main target. Through the slot in the door of the second underground room, somebody spies on Tsurugi and Yasuho's return.[1]

(Mentioned only)
Norisuke Higashikata I