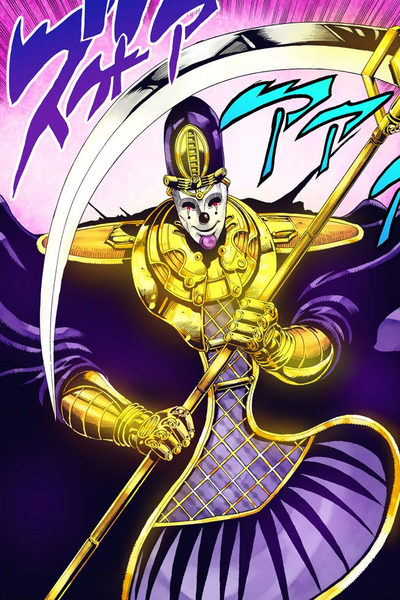 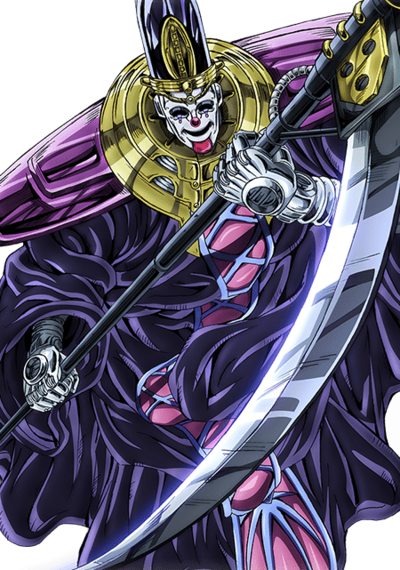 Death Thirteen (デスサーティーン（死神13）, Desu Sātīn) is the Stand of Mannish Boy, featured in the third part of the JoJo's Bizarre Adventure series, Stardust Crusaders. It has the formidable power to attack its victims in their dreams, luring their spirits into its own nightmare world where they have no power to retaliate. 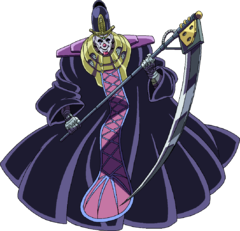 Appearing similarly to the depiction of its corresponding Tarot card, Death Thirteen appears as a large cloaked humanoid figure in the image of a Grim Reaper, armed with a great scythe.

Its face has the design of a Venetian carnival mask[1] with empty, upward-curved eyes with a slim triangle ending in a dot under each, a sphere on the tip of a nose like that a clown may wear, a static smile, an oval pad on the chin, and prominent cheekbones. Its expression never changes. In place of human ears, Death Thirteen has large, rimmed holes. Death Thirteen wears a hat resembling a mitre with a metallic rim decorated with small cylinders and a metallic oval on the front of the hat bearing a vertical groove with horizontal bands running down it like a ladder. The hat also has a metallic band with a circle in the center on the forehead and metallic circles where the ears should be.

Death Thirteen wears a large, dark cloak with metallic shoulder pads attached to it. The collar of the shoulder pads is comprised of three stacked rings. The bottom ring has an open front from which a rectangle with a fishnet pattern travels down the cloak, ending with rounded corners and in a pattern of slim light and dark triangles arranged horizontally. Only Death Thirteen's arms, which are entirely metallic, emerge from the cloak. Death Thirteen wields a massive scythe with a metallic pole.

The cloak worn by Death Thirteen is deceiving as Death Thirteen actually has no body underneath. The Stand is comprised of only its head and arms.[2]

As an extension of Mannish Boy's mind, Death Thirteen has a vulgar and sadistic personality, delighting in the suffering of those who fall into its dream world. It enjoys insulting them and toying with them before killing them with its scythe, such as when it makes Noriaki Kakyoin eat eyeballs[3] or when it traps the rest of the Joestar Group with their own body parts and apparel.[4] Because no Stand User trapped in its dream world can use their Stands, Death Thirteen is supremely confident in its ability to eliminate the Joestar Group.[3]

Death Thirteen tends to shout "Lali-ho" in joy while torturing its victims.

It represents the tarot card Death, which symbolizes self-awareness and transformation.[5]

Death Thirteen is unique in that it can only exist inside a dream world and thus requires that its victims are asleep. It is incredibly dangerous because it is certain to take people by surprise and it was only through chance that the Joestar Group survived its encounter. It is offset by the fact that the user, a baby at that, is defenseless when everyone is awake and cannot attract suspicion.

This ability comes in two parts. When anything alive (human or otherwise) falls asleep near Mannish Boy, Death Thirteen's User, they are drawn into Death Thirteen's dream world, which appears as a massive carnival, complete with Ferris wheels and roller coasters.[6]

Death Thirteen has full control over this dream world. It is able to make death machines out of mechanical items, summon objects out of nothing, manipulate Polnareff's hair or Joseph's hand, basically shaping everything as it sees fit.[4] However, the most redoubtable property of this dream world is that Stand Users cannot summon their Stand inside the dream world and are defenseless.[7] Death Thirteen explains that because Stands are made of spiritual energy, during their sleep, their spirits are "off-guard" and cannot defend themselves, thus Users cannot conjure Stands.[4] However, someone who falls asleep (or unconscious) with their Stand active beforehand will be able to summon the Stand inside the dream world.[2]

No one can willingly wake up from the dream world,[3] but they can be normally woken up by someone else and thus saved temporarily.[6] When they wake up, the surviving victims won't be able to remember anything from the dream but will still feel the dread they've had, giving the impression of a nightmare.[6] However, someone who manages to bring their Stand into the dream world will remember the dream.[2]

If Death Thirteen is obliged to fight a Stand, it remains dangerous because of its mastery over the surrounding world, but is also very fragile and weak, relying on scythe sweeps to wound. Thus, it was easily defeated by Hierophant Green.[2]

Unlike the original storyline, in the game, Mannish Boy attacks the entire group from inside a plane en route to India. During the battle, Death Thirteen's main attack consists of using its scythe several times.

Death Thirteen appears as a special enemy faced in Arcade Mode. The conditions to fight him include using only one of the eight main hero characters (including Young Joseph and New Kakyoin) and the player cannot lose a single battle. If these conditions are completed, a "Here Comes a New Challenger" will appear on the screen, taking the player to the world of dreams to fight Death Thirteen.

In the PlayStation version, the events from the Death Thirteen story arc appear in the Super Story mode, where the player has to defeat the Stand using Kakyoin. During the fight, Death Thirteen can summon a fake Star Platinum, Silver Chariot and Magician's Red to attack the player (these fakes are defeated with one attack), as well as fly around the stage and throw its sickle.

Death Thirteen's special battle can also be unlocked on Gallery mode (Oingo and Boingo's book), but the player can only play as one of the eight heroes (including Young Joseph and New Kakyoin). 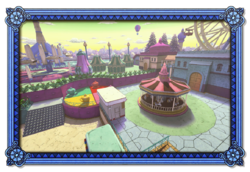 Death Thirteen's nightmare world is an available battleground in the game.