In every volume of JoJo's Bizarre Adventure, the front folded flap of the dust jacket usually contains a picture of Hirohiko Araki himself, and more than often a quotation. The quotes featured below the picture are always different from each other, and are usually about Araki expressing his opinion on certain subjects. These subjects can be about anything, including information about characters or the story itself. This section's notes are from the volumes of Stardust Crusaders and were translated in the English version published by VIZ Media. 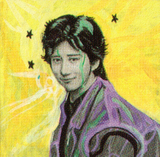 “
In this book, a new ability called "Stands" is introduced. "Stands" are psychic powers given a visible form and shape. Traditionally, these kinds of powers were shown with light and electrical effects, or aftereffects like crumbling buildings.

I asked myself, "How can I express this invisible power?" That's when I came up with "Stands".

Now, let's begin a new adventure with Jotaro and his friends!
”
—Hirohiko Araki 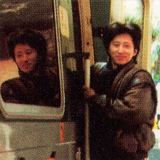 “
When I'm traveling, I can feel very lonely, so I appreciate the kindness of strangers from the bottom of my heart.
Still, sometimes I start wondering why someone is being so nice to me! Are they actually evil, and planning my demise?
Who's my friend? Who's my enemy?
A big smiling face says, "Please give me all your money." AHHH! Now that's scary...
”
—Hirohiko Araki 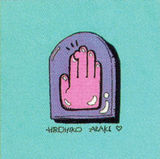 “
When you start working in the real world, you're often asked to trade business cards. But ever since I became a manga artist, I've had to say, "Oh, I don't have a business card. Sorry!"
Well, I've finally designed a business card with the mark you see above on it. Now even if I'm overseas, people can figure out what progression I work in. The international sign of a manga artist: the big callus on the finger.
”
—Hirohiko Araki 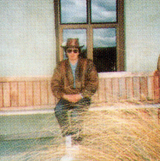 “
People often say that prostitution is the world's oldest profession. Well, that's what I learned in history class at least. (For those who don't know what "prostitution" is, ask your father.) But is it really the oldest profession? I found an even older one! I can't prove it, but I bet it goes away back! That profession is the storyteller who tells scary stories. (To be continued in the next volume)
”
—Hirohiko Araki 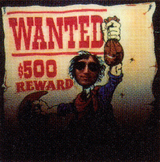 “
(Continued from last volume...) A long, long time ago, people sat under the starry night sky and gathered round a fire, as they listened to an old man tell frightening tales. They listened intently and let their imaginations take them into the world he described.
"Okay. That's enough for tonight."
"We want to hear more. I'll give you this fruit if you tell us more."
"I'll tell you tomorrow! Now, go to bed!"
That's the kind of story I hope to tell, and keep on telling.
”
—Hirohiko Araki 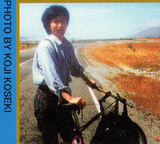 “
My friends often tell me, "You're really rude when I call you when you're working." I stopped and thought about it when my mother called me and said, "You're so rude, you're no son of mine." But think about it, people! I don't see what's so hard to understand. When I'm working, I can't blab about stupid stuff on the phone for hours like I do when I'm just hanging out, or I'll be late submitting my work. I'm a Gemini so I have a split personality. I wish people would just think of work and play as my on/off switch.
”
—Hirohiko Araki 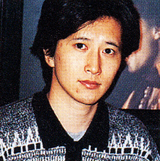 “
No one realizes this, but as of December I will have been a manga artist for ten years. (I'm not saying this because I want someone to congratulate me.) Ten years... it's only two words, but it's an amount of time that makes me go "Hmm..." When I consider that I spent my entire twenties working in manga, again I go "Hmm..." But I'm grateful to God and my ancestors for this feeling.
”
—Hirohiko Araki 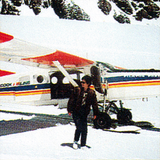 “
In the early 1980s I lived in Sendai. Back then I used to send photocopies of my corrected manuscripts to my publisher by postal mail. One photocopy cost me 40 yen (about 40 cents) per page. After the publisher received it I'd have to talk to them on the phone and discuss it. After a while this became a pain, so I moved to Tokyo by myself. Now faxes and color copiers are much better than they were back then. If they had been available back in the day, I doubt I would have moved to Tokyo. Lately I'm really seeing how times have changed.
”
—Hirohiko Araki 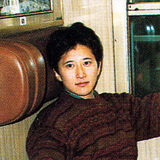 “
It's nothing to brag about, but I'm horrible at remembering things. I can barely remember what I did for fun as a kid, or what such-and-such TV show was about. The other day I saw Rie Miyazawa (a Japanese actress) but I completely forgot her name. When I asked someone what her name was, they laughed at me. (I should mention that I'm a huge Rie Miyazawa fan.) I'm really worried about my future...
”
—Hirohiko Araki 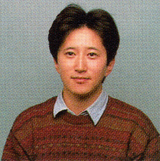 “
I could stay depressed about my bad memory, but that's a negative way to live. Let's look on the bright side and list the advantages of having a bad memory.
(1) You can reread a book and see a movie over and over and enjoy it as much as the first time.
(2) If you make an inconvenient promise, you can pretend that you forgot about it and still be forgiven.
(3) This is the most important thing: you can keep coming up with ideas without being held back by convictions or the past.
”
—Hirohiko Araki 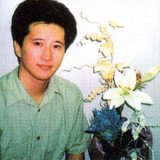 “
Lately cigarette smoke bothers me. I always notice it when someone is smoking near me. With that in mind, I decided that Hol Horse will quit smoking. But then I thought that it would be weird to suddenly change a character's habits. Hmm...but on the other hand, Hol Horse changes his mind all the time anyway. I figured "What the heck," so now he's using a smoke-free pipe.
”
—Hirohiko Araki 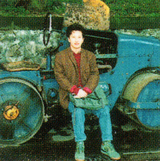 “
The most frightening thing that ever happened to me was when I experienced hail for the first time. As a child I never heard of this mysterious phenomenon of "hail" falling from the sky. One day I was playing in an open field when the sky suddenly turned black and a ton of ice cubes, like the ones I put in my Calpis Water, started falling from the sky. I remember thinking, "It's the end of the world. I'll never lie to my parents and I'll never pick on my little sister."
”
—Hirohiko Araki 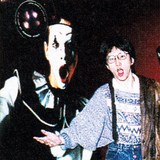 “
I know you might think this is silly, but I once had a dream that I was a sumo wrestler standing in the ring. This might sound humorous, but it was the most terrifying dream I had ever had. The match was being broadcast live nationwide on NHK, so if I ran away I would be known as the biggest coward in Japan. I was nearly naked and wearing only a fundoshi...Geh! I still weighed 125 pounds! "I'm going to die," I thought..." (To be continued in the next volume...)
”
—Hirohiko Araki 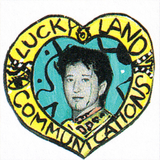 “
(Continued from last volume) So in my dream I am facing a sumo wrestler on national TV and trying to avoid being known as the biggest coward in Japan. I try to concoct a plan to lose the match without getting hurt. I get in the ring, and the referee says "Miatte!" ordering me and the other wrestler to face on another. The other wrestler is glaring at me and his face is four times the size of mine. There's an open wound on his forehead, probably from yesterday's brutal match. The wound starts to twitch, and blood oozes out of it. I'm pretty sure I let out a piercing scream at the point. (The End)
”
—Hirohiko Araki 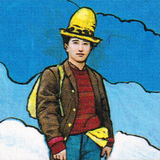 “
In my entire life, I've only seen a ghost once. It happened a few years ago when I traveled in England. I stayed in a hotel that used to be an old castle. It was only eight o'clock, but I was exhausted, so i want to bed early. A few minutes after I lay down, a woman came out through the slightly open bathroom door. I saw that there was blood on her wrist... (Continued in the next volume)
”
—Hirohiko Araki 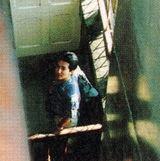 The female ghost floated across the room. Standing beside my bed, she looked down at me with a blank expression. I thought to myself, "I'm seeing a ghost! I thought I had no psychic powers!" Then the next moment I thought, "I'm really sleepy... I don't want to deal with this right now." As if she knew what I was thinking, the ghost's expression turned to sadness, and she slowly disappeared.