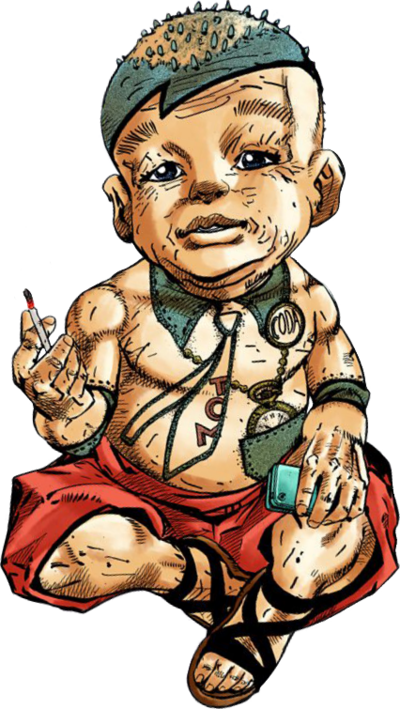 Smoking and going on dates[4]

Fatally shot through the head as a result of pursuing Toru

JJL Chapter 110 (Flashback)
“
These loose women, what'm I gonna do... I got a date all planned out with my cute girlfriend tonight tooooo. Hmmmm, this is trickyyyy.
”
—Poor Tom, JJL Chapter 70: Urban Guerrilla and Doremifasolati Do, Part 3

He is a member of the T.G. University Hospital Research Team within the Locacaca Organization, and the supervisor of Urban Guerrilla. He meets with Jobin Higashikata, instructing him to seal off the Higashikata orchard so he can attack.

Poor Tom is a Stand user whose long-range automatic Stand Ozon Baby can manipulate the air pressure in the vicinity.

Poor Tom is a short, overweight man, who can easily be mistaken for a child due to his height and youthful face. Despite his child-like appearance, Tom is covered in wrinkles and is seen smoking cigarettes. His hair is flat with a small bang over his forehead. Most of his hair is notably shaved in a curved shape with short spikes of hair protruding from it, leaving only a small circular patch of hair on the center.

Aside from his shorts and sandals, a majority of Tom's attire appears to be drawn onto his body with certain parts shaded in. Other drawn-on accessories include a tie with his name on it, a "Coda" pin, referencing the Led Zeppelin album, and a pocket watch.

He also possesses a doctor's uniform tailored to him, which he wears when working at the TG University Hospital.

The series is known for alternating colors between media, the information presented below may or may not be canon.
Skin(Fair)
Hair(Cyan)
Eyes(Blue)
Outfit(Red shorts, brown sandals.)
Drawn-On Accessories
(Green shirt collar, wristbands, and shirt pocket, pink lettering on tie, and golden pocketwatch.) 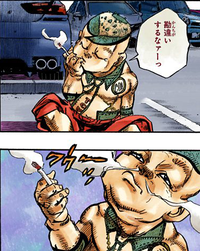 Despite his baby-like appearance, Poor Tom is mature, vulgar and a womanizer

Belying his appearance, Tom has a rather vulgar personality. He claims to have a girlfriend and still eyes other women, using his size to look under their skirts.[6] He also speaks in a familiar tone. Poor Tom smokes as well.[7]

Poor Tom is also quite devious and has some tactical acumen. He accurately analyzes the situation after Urban Guerrilla doesn't report to him and quickly goes to Jobin to enlist him.[7] In a bold move, he reveals a part of his Stand's secret to Jobin and decides to completely close off the entirety of the Higashikata's orchard to simply make Josuke unable to approach the Locacaca.[8] Poor Tom is additionally malicious in his intent, withholding information from Jobin that his Stand would not only target Josuke and Rai Mamezuku but the entire Higashikata family too. Planning to take his time once Jobin and everyone in his way is dead, Tom would search for the Locacaca at his leisure.[9]

As a Rock Human and member of the Locacaca Organization, Poor Tom is callous about human lives and is ready to kill anyone in his way. For instance, he trapped the entire Higashikata Family and planned on killing them[9] and brutally attacked Rai Mamezuku with his ability.[10]

However, Poor Tom displays a cowardly and desperate side to his personality when his life is truly threatened. After being cornered by Josuke, Poor Tom resorts to begging and pleading for his life; offering Josuke large amounts of money to spare him.[11]

As a doctor specialized in obstetrics, it can be inferred that Poor Tom was bright enough to obtain his medical license by himself or at least perform his job well enough without raising suspicion.[12] 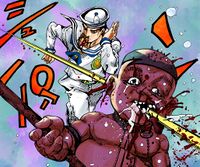 Poor Tom flees from Josuke's bubble. He disables Ozon Baby to change the course of the bubble, it pops, showing nothing inside. Poor Tom, after grabbing what he thinks to be the Locacaca branch, runs towards the ambulance before he is suddenly shot to death by an unknown assailant. It is later revealed that due to his pursuit of his ally inside the ambulance with Wu Tomoki, their Stand ability brought about Poor Tom's demise.[13]