My Name Is Doppio, Part 1 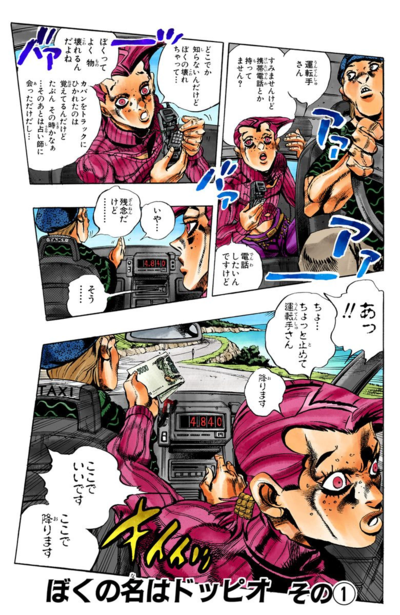 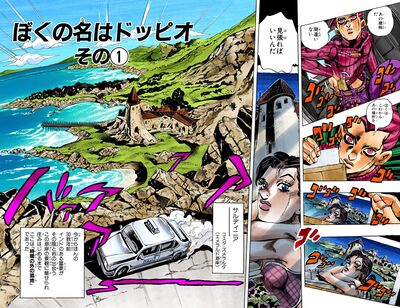 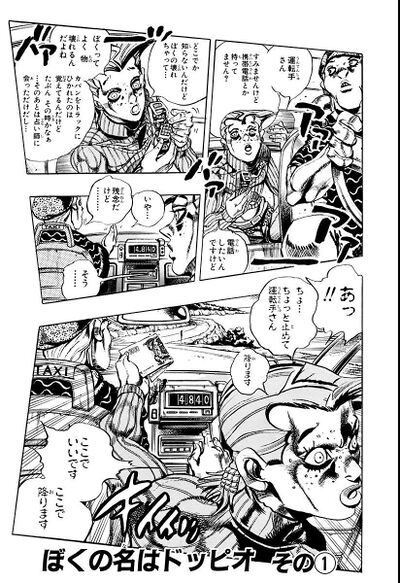 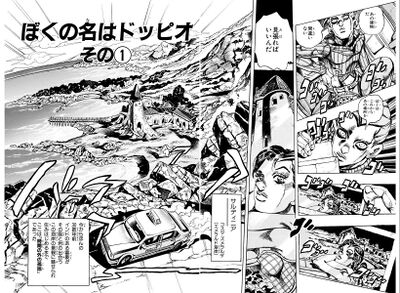 My Name Is Doppio, Part 1 (ぼくの名はドッピオ その①, Boku no Na wa Doppio Sono 1), originally Doppio!! (ドッピオ!!, Doppio!!) in the WSJ release, is the one hundred third chapter of Vento Aureo and the five hundred forty-second chapter of the JoJo's Bizarre Adventure manga.

Doppio arrives at Costa Smeralda with a taxi. He opens an envelope containing Donatella's photo, and recalls his orders to watch a building in the area. Costa Smeralda is referred to as a land outside the passage of time, and the history of the area as well as its inhabitants are briefly described.

The taxi driver then tries to scam Doppio out of his money, demanding ten times more than what Doppio is supposed to pay. He harasses Doppio and attempts to steal the envelope containing Donatella's photo, believing that it contains more money. This causes Doppio to go berserk, and he nearly gouges the scammer's eye out. He is interrupted when he hallucinates a phone call, and grabs an animal figure hanging from the taxi's car mirror to use it as a phone. The taxi driver manages to escape, thinking that Doppio is a lunatic.

The Boss is the one that was "calling" and warns Doppio that he is being watched by Risotto Nero. He instructs him not to act suspiciously and be careful, as Risotto's power is unknown even to the Boss, before finally "hanging up" the phone.