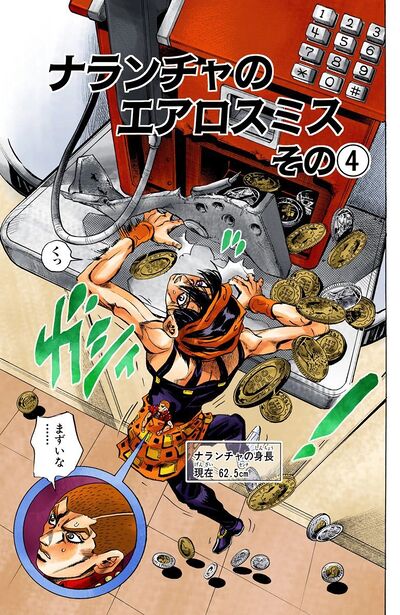 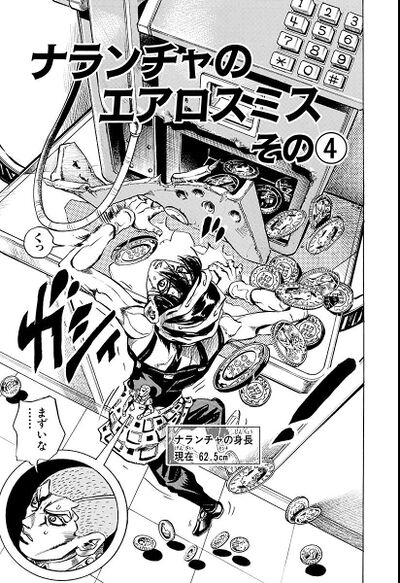 Narancia's Aerosmith, Part 4 (ナランチャのエアロスミス その④, Narancha no Earosumisu Sono 4), originally How Did He Find Me?! (なぜバレた!?, Naze Bareta!?) in the WSJ release, is the thirty-fourth chapter of Vento Aureo and the four hundred seventy-third chapter of the JoJo's Bizarre Adventure manga.

Now only sixty-two centimeters tall, Narancia climbs onto a pay phone so he can call Bucciarati and alert him to the enemy Stand users. Narancia inserts his coins and dials, but Formaggio, still hiding inside Narancia's pocket, cuts the phone lines.

Using Aerosmith, Narancia finds Formaggio, grabs him, and uses his Stand to shoot at the shrunken man. Formaggio uses his Little Feet to instantly enlarge a shrunken pen, pushing Formaggio out of Narancia's hand and outside into the streets. Formaggio then hides behind a nearby street sign, but is quickly found by Aerosmith.

Startled and confused, Formaggio escapes and hides under a parked car, but is yet again caught by Aerosmith. Aerosmith shoots at a tire, the released air blowing Formaggio into a sewer drain. Now hiding in the sewers, Formaggio realizes that Aerosmith can do more than just fly around and shoot.