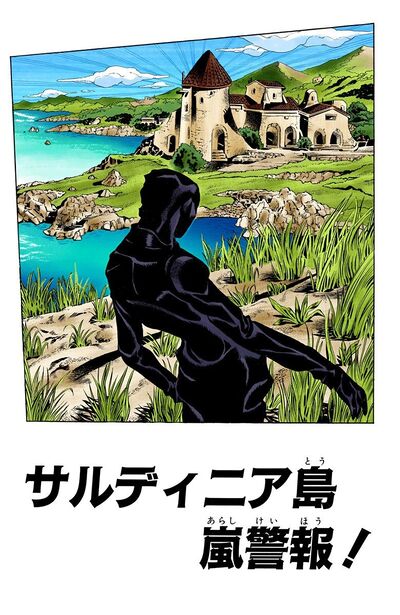 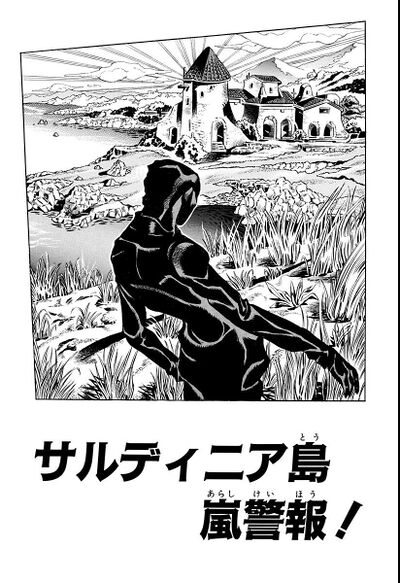 Storm Warning in Sardinia Island! (サルディニア島嵐警報！, Sarudinia Tō Arashi Keihō!), originally The Secret!! (秘密!!, Himitsu!!) in the WSJ release, is the one hundred second chapter of Vento Aureo and the five hundred forty-first chapter of the JoJo's Bizarre Adventure manga.

Vinegar Doppio is shown leaping to save a kid from a car; the kid was in fact aware of the car and casually avoids it, while Doppio is narrowly run over. Doppio is approached by a fortuneteller, offering a divination for 200 liras. Doppio refuses the offer as he considers fortunetelling a scam, inciting the fortuneteller to try to demonstrate his ability by divining Doppio's past.

As both go deeper into a dark alley, the fortuneteller uncovers strange facts such as him having a daughter. Finally Doppio snaps and chokes him. The fortuneteller witnesses Doppio aging and gaining muscle, while his personality change. He is ordered to divine a photo of Risotto Nero, and says that both will meet soon.

The fortuneteller is subsequently killed. That scene is interrupted by the frightened kid from earlier, who sees Doppio getting out of the alley and glad that the bug Doppio tried to save in reality, is unharmed. Doppio then departs to his destination.