My Name Is Doppio (story arc)

My Name is Doppio 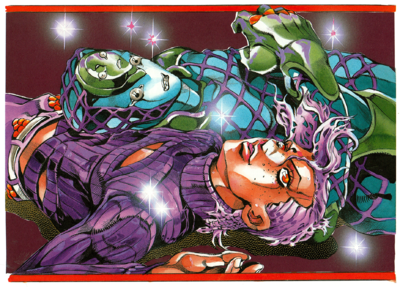 My Name Is Doppio (ぼくの名はドッピオ, Boku no Na wa Doppio) is the eighteenth story arc in Vento Aureo.

It narrates the misadventures of the boss's personal agent Vinegar Doppio, and his encounter with Risotto Nero, the head of La Squadra Esecuzioni.

A young boy named Vinegar Doppio leaps to save a child from a car; the child, having been aware of the car already, casually avoids it as Doppio is nearly run over. Lamenting his bad luck, Doppio is beckoned by a fortune teller in a dark alley. Though Doppio refuses his services, the fortune teller demonstrates his ability by divining Doppio's past. To the fortune teller's own surprise, it turns out that Doppio has a teenage daughter, a two-sided personality, and a secret that will bring him happiness as long as it is kept. At this moment, Doppio begins choking the fortune teller, and his face and body change dramatically. The fortune teller is ordered to divine a photo of Risotto Nero, and says that his assailant will meet him soon. The fortune teller then reaches for his assailant's hand to further divine it, but finds himself holding his own instead; King Crimson quickly disposes of him. Reverting back to his prior form, Doppio departs to his destination.[1]

Doppio's taxi stops near Costa Smeralda. The taxi driver attempts to scam Doppio and steal his wallet, only for Doppio to stick a finger under his eye. However, Doppio then receives a "call" from his boss, who reassures him that the taxi driver has not learned their objective. The boss then warns Doppio that La Squadra Esecuzioni's leader, Risotto Nero, has already begun observing him.[2] After causing him to trip over a knife, Risotto confronts Doppio and interrogates him about why he came to Costa Smeralda. Though Doppio nearly fools Risotto into believing he's innocent, the two of them notice Aerosmith, causing Risotto to deduce that Doppio is a Stand user. Doppio threatens Risotto, but multiple razor blades suddenly appear in his mouth.[3]