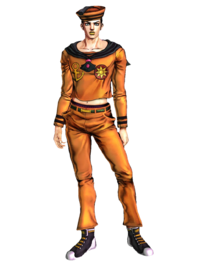 Josuke's appearance in the game was a surprise for fans, as Part 8 was still fairly recent and only 3 volumes into its story. As a result most of his moves, animations, taunts and such are based on those three volumes, along with a few liberties, making a couple of his animations and skills somewhat limited or even awkward.

During battle, Josuke can use various abilities and maneuvers featured in the early portions of JoJolion.

Josuke can summon or dismiss his Soft & Wet, altering his available abilities.

Josuke leans forward and forcibly stomps. This is a low attack that cannot be blocked standing, can strike a downed opponent, and a command normal that can chain into Josuke's skills. (Comboable)

Special Moves (Stand Off)
So slippery!

Josuke has Soft & Wet remove his own friction as he begins spinning around on the floor while curled up and moving forward, hitting the opponent multiple times. This is a low attack that cannot be blocked standing. A follow-up skill can be used before Josuke recovers. (Flash Cancel comboable)

Zero Friction
(During "So slippery!")

Josuke stops spinning and slides forward to unleash a double kick that knocks the opponent off their feet. This is a low attack that cannot be blocked standing. Josuke is especially low to the ground while performing this skill, letting him evade most attacks. (Flash Cancel comboable)

Let me take that from you.

Josuke releases from his hand a small cluster of projectile bubbles which slowly float straight forward before popping. The bubbles hit multiple times upon making contact, staggering the opponent and giving the attack sufficient combo utility. The attack button inputted determines the size of the cluster and thus the amount of hits and damage inflicted. (Comboable)

Don't mess with me!

Josuke slides a forward distance in a low stance and delivers a potent straight punch, leaving the opponent crumpling. The attack button inputted determines his travel distance, inversely affecting recovery time. Due to his crouched posture while moving, this skill can allow him to move under high-flying projectiles and other similar attacks. (Comboable)

How to use the bubbles

Josuke "shaves" his face by surrounding his body with a dense cluster of bubbles. The bubble cluster acts a stationary trap and obstacle, damaging the opponent if they come in contact, though easily popped by most other projectiles. The bubbles hit multiple times upon making contact, staggering the opponent and giving the attack sufficient combo utility. (Comboable)

Special Moves (Stand On)
Don't get any ideas!

Josuke and Soft & Wet leap forward and fly through the air as S&W rapidly punches (Flash Cancel comboable). S&W finishes the assault by reaching forward, grabbing the opponent and throwing them behind Josuke.

The hell is your problem?!

Josuke dashes backwards and into a low crouch as he sends out Soft & Wet to advance forward while punching. The attack button inputted determines Josuke's backdash distance and Soft & Wet's forward distance.
This ability can initiate Rush Mode, and is a Stand Rush skill that Josuke can disconnect from to freely act while it is executing. (Flash Cancel comboable)

I gotta win this!

Soft & Wet unleashes a powerful spinning side kick that sends the opponent flying into the stage wall. A Stand Rush skill that Josuke can disconnect from to freely act while it is executing. (Flash Cancel comboable)

Soft & Wet conjures a bubble that it uses to take the friction from the opponent's feet, causing them to slip and fall, before Josuke knees them in the face as they come down.

Josuke throws out a fast-moving bubble created by Soft & Wet as a projectile. If it hits the opponent, the camera shifts to the opponent's point of view as the bubble floats up to their eyes and pops, instantly blackening the screen as it steals their vision and leaving them crumpling (recreating Josuke's self-defense against Joshu in the first chapter of JoJolion).
Since the HHA results in the opponent crumpling if they were on the ground when struck, Josuke can follow up on the attack if quick enough, marking it one of the only scarce few HHA in the game that do not definitively end a combo on success (the other being DIO's "Scared, are we?" HHA while his "Time, stop!" special is active).

Josuke pulls out a projectile bubble with homing capabilities from his Joestar Birthmark and flings it. If it hits the opponent, their entire body's friction is taken, making them slip off their feet and onto the ground where they lay completely vulnerable. Josuke calmly and confidently explains what's happened to them, before Soft & Wet flies in to deliver an uppercut that knocks them into the air. The Stand then unleashes an upwards barrage of punches, finishing with a powerful hook that sends the opponent spinning out.

Josuke a simple-yet-effective fighter who specializes in defensive play and spacing. With a variety of ranged abilities including projectiles, a stationary trap, and a plethora of mid-ranged skills carrying various evasive properties, he can easily engage in combat from afar whilst keeping himself out of his opponent's own effective range. This aligns his playstyle with that of zoners, though by comparison, he is much more capable up close than said archetype. One of Josuke's most notable traits is his HHA's property of leaving the opponent crumpling and vulnerable to follow-up attacks, which allows him to extend combos and deliver considerable damage utilizing less Heart Heat than most.

However, aside from his homing GHA, Josuke lacks a substantial anti-air, and none of his moves function well as reversals or counters. This makes him especially vulnerable to heavy aggression and rushdown tactics, and it can be difficult for him to break free of his opponent's offense. When playing offensively himself, his ability to pressure the opponent up close is also somewhat weak, requiring him to use his projectiles and trap to cover an approach lest he leaves himself open.

Josuke has the tools necessary to engage in excellent spacial control and punishment strategies, and once he lands a solid hit, his most devastating combos are considerably Heart Heat-efficient due in no small part to his utilitarian HHA. As each of his abilities possess a clear and cohesive purpose in battle, he is a combatant that is surprisingly easy to wield, while at the same time carrying great potential for advanced setplay and strategies.