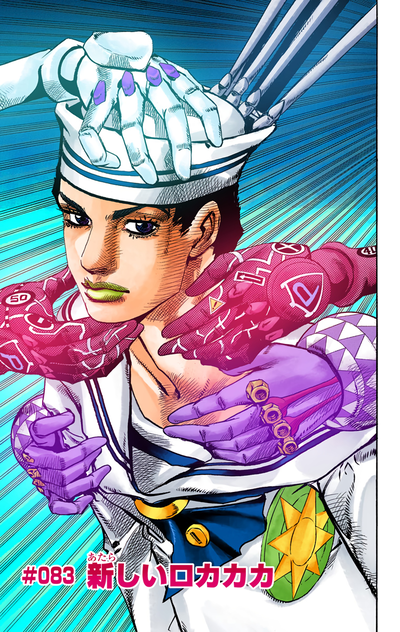 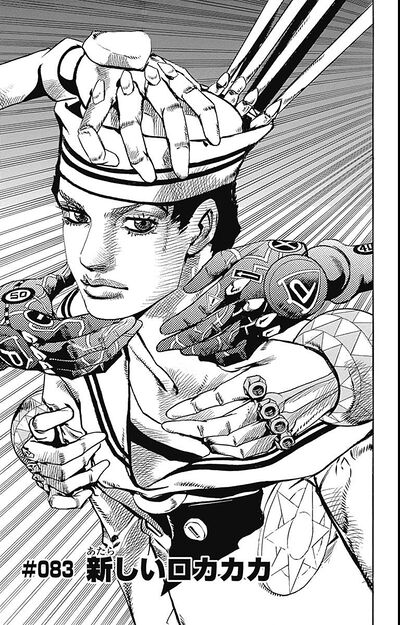 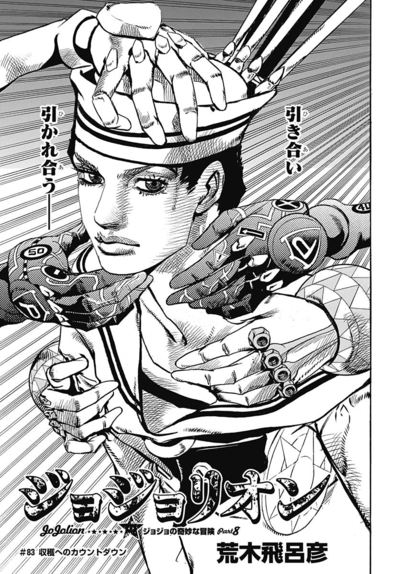 The New Locacaca (新しいロカカカ, Atarashii Rokakaka), originally titled Countdown to the Harvest (収穫へのカウントダウン, Shūkaku e no Kauntodaun) is the eighty-third chapter of JoJolion and the nine hundred thirtieth chapter of the JoJo's Bizarre Adventure manga.

In the aftermath of the battle against Wu Tomoki, Josuke Higashikata, Yasuho Hirose and Rai Mamezuku assemble. Researching the T.G. University Hospital and discovering its history and profile, they also learn that Wu Tomoki, Urban Guerrilla (revealed to be named "Ryo Shimosato"), Poor Tom, and the unseen hospital director are the only people to have entered the secret laboratory. Unable to find any information on the mysterious hospital director, Mamezuku and Josuke conclude that he is the one with the Locacaca branch.

However, Yasuho assures that the Locacaca Research Organization is not in possession of the branch, saying that Dr. Wu attacked Mitsuba to find the branch's whereabouts. Upset by her refutation, Mamezuku criticizes her brash actions back in the hospital and argues that both he and Josuke saw the branch being taken with their own eyes. Josuke agrees, adding that the whole Higashikata family was locked away from the orchard at the time of the attack, making it seemingly impossible that any of them could intervene. Although Jobin remains a suspect, the two men decide to investigate the hospital director first. Upset that her theory has fallen on deaf ears, Yasuho incidentally meets Toru again, with whom she instinctively holds hands with but quickly backs off. Expressing a desire to see her again, Toru leaves. Observing from afar, Mamezuku teases Josuke about his relationship with Yasuho but then proposes to research Toru too.

At the Higashikata House, Joshu plays a prank on Hato by detaching his tongue using Nut King Call and throwing it at his sister, playing dumb when Hato accuses him. However, when Daiya sends Tsurugi to look for Norisuke, the boy accidentally steps on Joshu's tongue, causing him to bend over in pain and proving his guilt. The narration reflects on how Stands remain a private topic even among a close-knit family and then ominously reveals that there is a time when the hidden feelings of the heart will inevitably come out and be impossible to stop.

The plot flashes forward to 13 minutes just before the harvest of the Locacaca. Tsurugi steps inside Norisuke's office, where Norisuke's body lays on the floor in a body bag, bleeding severely and with one arm severed. As Tsurugi calmly drags Norisuke's body into the balcony, an origami frog hops out of the body bag.

The plot then jumps back to 7 days, 1 hour and 2 minutes before the harvest of the Locacaca. Mitsuba arrives in front of Tsurugi's school to take him back to their home after a school trip to the Omoshiroyama-Yamadera trail. The crowd is disturbed to see her missing nose, but Mitsuba reassures them that everything is fine before taking Tsurugi with her. However, the leader of the troop then talks with Mitsuba about an incident that happened during the trip. According to the teacher, Tsurugi was teased by a group of girls about rumors of the murder that Jobin committed. Almost immediately after the teasing, the apparent leader of the girls, Mina, is frightened by a frog leaping on her shoe, causing her to fall into a puddle of water. Upset by the topic of the teasing and believing that Tsurugi hasn't done any wrong, Mitsuba threatens to have the leader fired. As she calls for Tsurugi to come home with her, she notices that the boy has hidden behind the slides.

Suddenly, one of the girls that bullied Tsurugi frantically runs up to the leader and cries for her to call an ambulance. Screams and shouts erupt from the school entrance as the body of Mina is discovered, having apparently been crushed between the iron gates of the school. A bystander also notices that Mina's underwear is stained with blood. Mina's mother, sobbing and holding her daughter's body, insists that the gates were far too heavy to have merely closed on their own and that someone intentionally closed them. As the leader asks if anyone saw what happened, the girl that alerted her claims that she saw Tsurugi push the gates closed. The crowd turns to look at Tsurugi, as Mitsuba stands in shock. 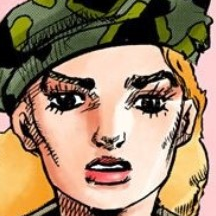 Author's Note
“
My first dream of the year was a bee stinging the ring finger of my left hand. Is this good or bad luck?
”
—Hirohiko Araki
“
左手の薬指を蜂に刺される初夢を見た。これは幸運なのかやばいのか。
”
—Hirohiko Araki