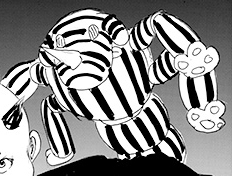 Stray Dog (ストレイドッグ, Sutorei Doggu) is the Stand of Shigetaka Yangu from the 37th universe, featured in the light novel JORGE JOESTAR. It is a striped insectoid Stand that can control all the stray dogs in the vicinity.

Stray Dog's torso is divided into three segments, with its head and four legs growing from the first segment. Its body is filled with vertical stripes, whereas its face has horizontal stripes. Stray Dog has a pointed nose, floppy ears resembling a dog, and its tongue sticking out. Its eyes have three vertical lines instead of irises.

Stray Dog is capable of controlling all of the stray dogs in the town of its user. Its range extends to at least the whole town or city.[1]