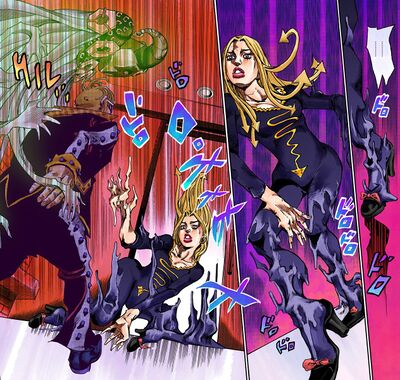 It narrates the awkward moment between the Higashikata Family and Hato's new boyfriend, Tamaki Damo, who reveals himself to be a malevolent Stand User linked to the Locacaca.

The legendary Locacaca Tree is introduced, being a plant from New Guinea formally discovered by an Australian expedition in 1938. The Locacaca was already very rare for the native New Guinean, who occasionally used the fruit to cure various ailments. During World War II, all reports of the fruit disappeared and it became a mere legend. Yasuho and Tsurugi are sitting in Yasuho's family room and are having a telephonic conversation with Josuke. Yasuho has done some research about Josefumi Kujo and asks why Josuke is interested in him, to which Josuke answers that Josefumi might be his original identity. He then plans to go at Josefumi's house for further investigations and asks Yasuho if he can find a picture of him.

Josuke's conversation is interrupted when he sees Hato coming back. Daiya and Joshu become incredibly excited, as Hato has brought her first boyfriend home. Daiya explains the situation to Josuke and enthusiastically asks how handsome is Hato's boyfriend. However, he and Norisuke are flabbergasted to see that the man in question is rather ugly, being short, overweight, adorning a horseshoe mustache and wearing a tracksuit. He introduces himself as Tamaki Damo, manager of a cleaning store and 23 years old. Joshu finds the situation hilarious and openly mocks Damo, which infuriates Hato. Damo offers Norisuke some youkan; it is at that time that Kei Nijimura and Norisuke notice separately strange fingerprints on the family room's door handle and the youkan box, Nijimura trying to clean the fingerprints on the handle.

Norisuke tries to change to subject of conversation and asks how Hato and Tamaki got acquainted with each other, wiping some handprints on the window. Meanwhile Josuke resumes his conversation with Yasuho on the phone and tells her to fax the photo of Josefumi she's found; Yasuho is rather skeptical as she comments that Josefumi doesn't look like Josuke. Hato then narrates that when she was doing a photo shoot in a studio next to Damo's shop, one of the necklace broke. Damo picked up all the pieces and repaired it, offering the necklace to Hato. Moreover Damo managed to write the sentence "I Love You" on the necklace, and Hato was seduced by the incredibly romantic gesture.

Josuke then announces that he'll go out for a bit, and Norisuke asks him before that to get Nijimura, who's gone to the foyer and isn't answering. In the foyer, Josuke spots Nijimura's dish towel on the floor then traces of Nijimura, as if she's slipped into the walls. Meanwhile Damo enters the room on the left instead and gets out, which Joshu notices. Meanwhile the fax has finally printed and it is revealed that the man on the photo is none other than Tamaki Damo, using the name Josefumi Kujo. Daiya notices the fax while Joshu opens the locker door to look further inside it, but his hands slip inside the handles. Joshu then trips when he tries to free himself and hits his head on a nearby faucet it opens and the tap water goes through his head; Joshu is powerless as he and his Nut King Call are melted and drained into the faucet. Meanwhile Daiya, who is near blind, can only read the name on the fax and doesn't let the others see what is on the document. However Hato notices Damo's photo and asks to examine the sheet, to Daiya's refusal. Daiya runs to the next room to give Josuke his fax, but when Josuke looks at her, she's collapsed and is melting on the floor.

As Josuke is stunned to see Daiya melting on the floor, Tamaki Damo approaches Hato and kindly asks her to go to the foyer and get back the fax. When Norisuke drinks his champagne, the bubbles distort his skin greatly and as he melts, Damo reveals his true self. Switching his behavior for a dominative one, Damo reveals that he's come to the Higashikata estate to solve "three" problems. Revealing his Stand Vitamin C, Damo explains that he's firstly investigating the disappearance of an architect, two twin brothers and a security guard, eliminating the responsible party if necessary. While Damo proceeds to toy with the softened Norisuke, he asks him about Yoshikage Kira; Norisuke tries to play dumb, to no avail. Damo then tells Norisuke about the beginning of the whole affair.

Two years ago, Yoshikage Kira, 27 years old and ship doctor by profession, is called on the deck to save a man who's fallen from the upper deck. After a short examination, Kira asks about the second victim, as there is another blood trace on the ground. Kira then discovers that the blood comes from one of the Rocks stored inside a container which was burst open, and notices the human form of Aisho Dainenjiyama in the rock. Curious, Kira inquires about the container and learns that it's from Port Moresby in New Guinea, that its cargo is listed as perfectly legal, and that the Higashikata Fruit Parlor is he client. Back in Morioh, Kira is watching over the docks. He surprises Ojiro Sasame eating noodles in a nearby restaurant and bullies him, prompting the surfer to flee. Meanwhile Kira finally sees Aisho getting out of the hangar where the Rocks were stored, and deducing that he is part of a strange fruit trade, decides to tail Aisho and eventually steal the fruit. When the client in question manages to extract the pepper from the soup, Kira recognizes the man as Josefumi Kujo.

In the present, Josuke warns Hato, who's entered the foyer, not to touch anything and tells her that Tamaki Damo is attacking the family right now. Josuke tries to escape by breaking the glass door with a flower pot, but it slips back at Josuke, who is now under the effect of Vitamin C as well. Unknowingly to Hato, the enemy Stand lurks right behind her.[1]