From JoJo's Bizarre Encyclopedia - JoJo Wiki
Jump to navigation Jump to search
This page is a translated version of the page Harvest and the translation is 0% complete. 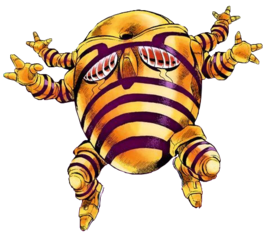 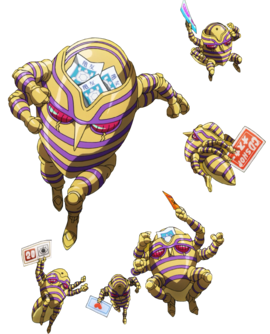 Harvest (ハーヴェスト, Hāvesuto) is the Stand of Shigekiyo Yangu, featured in the fourth part of JoJo's Bizarre Adventure, Diamond is Unbreakable. Harvest is a colony of small bee-like imps that Shigechi typically uses to collect items but can overwhelm anyone due to sheer numbers.

Harvest is one of the few Colony Stands, composed of about 500[2] small units that may act individually.

"Harvest" takes the form of small, oval-shaped, insect-like creatures with four articulate arms and two legs; three fingers on their hands; with large appendages at their posteriors, resembling a bee's abdomen.

Their entire bodies are patterned by stark, even horizontal stripes alternating between black and a light color. Their faces act as pockets behind which they store whatever they carry. They have a hole on their foreheads that can produce a needle to inject liquids. Their eyes are semicircular, in line with blocky noses.

Harvest is yellow with purple stripes in most media featuring it.

Harvest speaks in a high pitch of limited phrases, including "Found it!" and the laugh "Hee hee!" autonomously. Their user can speak through them with complete sentences, however.

Harvest is a long range colony Stand one can underestimate because of its and Shigechi's innocuous appearance, its basic power, and the petty way in which it is used to gather lost coins and other knickknacks across Morioh.[4]

However, the number of units coupled with their ability to still punch into the flesh means that Harvest can easily overwhelm even Josuke and Okuyasu,[2] and Shigechi is imaginative in the way he uses his Stand, making the Stand a force to be reckoned with in battle.

Harvest has an extremely large range, with its units being able to move through the entirety of Morioh without any issue.[8] Shigechi can command Harvest to sweep Morioh and collect a particular type of item light enough for Harvest to carry it then bring it back to Shigekiyo; the child typically gathers small coins[4] but on Josuke's advice takes on harvesting store coupons which can bring more money.[8]

It has limited use in combat, but Shigechi is able to dismantle objects rapidly thanks to Harvest, enabling him to occasionally take advantage of the environment[6] or create hiding spots rapidly.[9]

Each individual Harvest possesses a needle with which Shigechi can inject any liquid directly into his opponents' bloodstream, at one point intoxicating Josuke and Okuyasu by injecting alcohol inside them and crippling their fighting ability.[6]