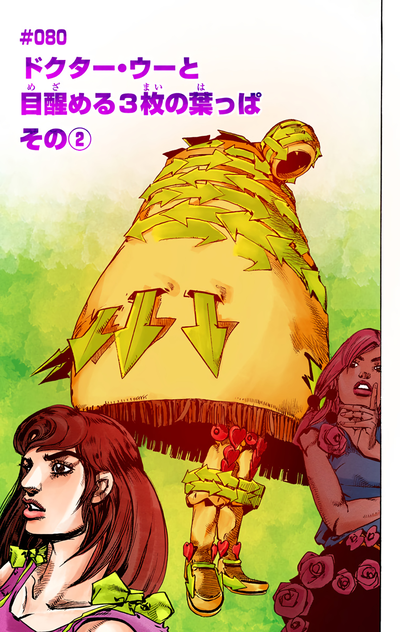 It follows the subsequent investigation by the protagonists of Morioh's University Hospital, as well as Yasuho and Mitsuba Higashikata's confrontation against Wu Tomoki.

In the aftermath of the latest attack on the Higashikata Family, Joshu accuses the unfamiliar Mamezuku of being the arsonist in the orchard. However, Norisuke and Josuke clarify the situation, explaining that Mamezuku is a plant appraiser working for Norisuke, and that the Higashikata House was attacked because of the Locacaca. The branch was stolen by an ambulance driver and his comrade, who Norisuke supposes are Rock Humans.

Tsurugi listens nervously as Jobin tries to mislead Josuke into focusing on the hospital. Mamezuku declares that there are ten days remaining in which to find the Locacaca before the fruit can be harvested, explaining to an incredulous Joshu how that feat is possible by grafting the branch to a potted cactus. Hato anxiously wonders what the family will do now that their ancestral orchard was burned down, to which Joshu begins to comically babble about converting their land into a "Matsutake Hunting Tour". Rambling about his idea, he is notified by a supportive Daiya that everyone has left.

Alone with Josuke, Mamezuku reveals to him that he knows that neither Poor Tom nor the ambulance drivers who lit the orchard on fire, the true culprit being Jobin. Mamezuku plans to investigate Jobin while he and Josuke are dealing with the two ambulance drivers, having the ambulance's license plate number as their only lead.

Mitsuba Higashikata goes to the university hospital to complain about her latest affliction: the side of her head is secretly turning into stone. Her physician, Dr. Wu Tomoki, then suspiciously proposes to her a secret new treatment. Later, Yasuho who has gone to the same hospital, sees Mitsuba without her legs. She calls Josuke and informs him of this, causing Josuke and Mamezuku to worriedly rush to the hospital. Despite their warnings to not interfere, she decides to investigate further. Following Mitsuba into an examination room, Yasuho explains the situation to Jobin's wife but is soon attacked by Dr. Tomoki, who can disassemble into small pebbles and infiltrate bodies.[1]

Thankfully, she manages to extract the fragments before she can be controlled. Mitsuba realizes that she doesn't know what the treatment to her ailments really is, only remembering entering a room full of Locacaca trees. Revealing that she is pregnant and wishing to investigate what was done to her, Mitsuba decides to fight with Yasuho. Dr. Wu Tomoki stops them from reaching Josuke and Mamezuku in the lobby, but Mitsuba summons her Stand, Awaking III Leaves, whose vector power manages to keep the pebbles away. Going into an elevator, Mitsuba tries to evacuate the rocks from her body but sees with horror that at least part of the fetus she's carrying has turned into stone. Then the two women are soon caught up by Tomoki.

Horrified and angry, Mitsuba manages to trap most of Wu Tomoki and then tosses him through a window. Resolving to save the baby, Mitsuba puts its fragments back into her body and heads to the examination room. Incidentally, Yasuho meets an old acquaintance of hers, Toru. She asks Toru to alert Josuke and Mamezuku of her location, and while the two women investigate the room, looking at a video demonstration of the Locacaca and opening the vault, Toru meets with Josuke Mamezuku. Toru then reveals that he is Yasuho's ex-boyfriend.

In the laboratory containing a garden full of Locacacas, Mitsuba wastes no time to eat one of the Locacaca to save her foetus. However, Wu Tomoki has already returned and infiltrated the fruit, taking control of Mitsuba once again. She sends Yasuho flying into one of the laboratory's niches containing deadly diseases and breaks the vials and petri dishes open, threatening to kill anyone in the room. However, Yasuho returns some of the arrows against Tomoki and successfully purges him out of Mitsuba. Although Wu then turns the garden into fragment and tries to forcefeed the women, Josuke barges in and saves them with Soft & Wet, trapping Wu Tomoki inside a bubble mixed with medicinal cement. Wu suffocates due to the cement preventing skin respiration and dies.

Yasuho and Mamezuku see that the stolen Locacaca branch isn't there and everyone exits the room, but not before destroying the stored trees. Reaching to the conclusion that during their fight with Poor Tom, the branch was switched by a third party, the group begins to suspect Jobin Higashikata. Meanwhile, seeing her petrified nose, Mitsuba smiles as she knows her child is saved.[2]