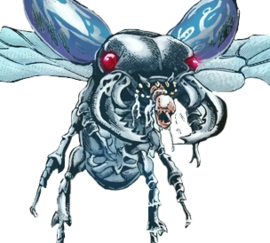 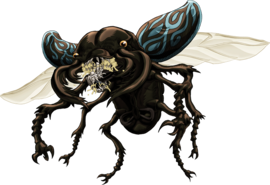 Destructive Power
E
Speed
A
Range
A
Persistence
C
Precision
E
Developmental Potential
E
A
B
C
D
E
A: Very Good
B: Good
C: Average
D: Poor
E: Very Poor
“
You could be one inch away, pointing at me with ten guns... The ten bullets wouldn't even touch my Stand!
”
—Gray Fly about Tower of Gray's speed, Chapter 123

Tower of Gray (タワー・オブ・グレー（灰の塔）, Tawā Obu Gurē) is the Stand of Gray Fly featured in the third part of the JoJo's Bizarre Adventure series, Stardust Crusaders. It takes the form of a giant stag with the ability to move at incredibly fast speeds and tear out the tongues of its victims. 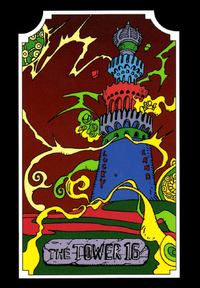 Tower of Gray appears as a large, dark stag beetle

about the size of one's hand with intricate patterns on its shell. A hidden, toothed, secondary jaw can spring out from its mouth.[1] Despite having the general form of a beetle, it also possesses teeth in its mouth.[2]

Tower of Gray is generally portrayed as being a red-eyed bug with a jet black shell, and blue patterns.

Tower of Gray's modus operandi is to use its second mouth and speed to tear out the tongue of an opponent, but it demonstrates no personality of its own apart from its user's.

Tower of Gray specializes in making attacks look like accidents. Muhammad Avdol comments that it is responsible for many cases of arson, plane and train crashes, and most recently an accident in England that caused about 300 casualties.[2]

It represents the Tarot Card The Tower

, which symbolizes the interruption of a journey by something unexpected and chaos.[2]

Tower of Gray easily flying through skulls, killing its targets