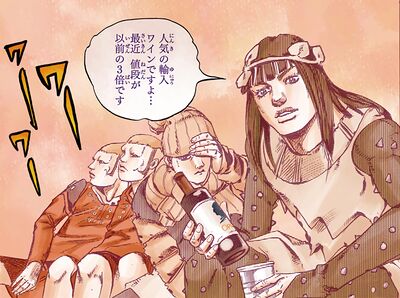 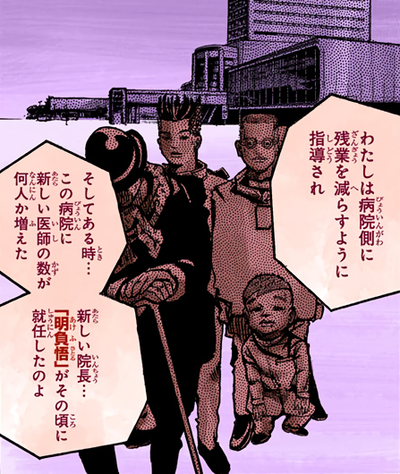 The mastermind of the organization is Toru, under the guise of Satoru Akefu, the hospital director of TG University Hospital. It is a covert group whose main goals include gaining the power of the New Locacaca's equivalent exchange and to secretly obtain and sell Locacaca fruits for wealth and power.

The organization is largely secretive and not much is known about its formation or history. In 1941, Toru was spotted by Lucy Steel, a Speedwagon Foundation member investigating a new species of plant in Morioh, putting Locacaca plants in a pot before disappearing.[1] In 2001, Toru encounters a young Yasuho Hirose, and uses her stand Paisley Park in order to steal Satoru Akefu's identity, which he would later use to pose as TG University Hospital's hospital director.[2] In 2009, Damo's smuggling cartel began utilizing the Higashikata Fruit Parlor's cargo shipments on the vessel where Yoshikage Kira was employed. An unspecified number of years before 2011, four of its members joined the staff of T.G. University Hospital as doctors. Eventually, the group's mastermind would take over as hospital director.

The Damokan Group (ダモカン達, Damokantachi),[3] led by Tamaki Damo, is primarily interested in smuggling Locacaca fruits. Working under Damo are Yotsuyu Yagiyama, Aisho Dainenjiyama, and the A. Phex Brothers. Jobin Higashikata serves as a business partner who used his family's business to launder money for Damo. The group's primary goals are monetary, wishing to market the Locacaca fruit to sick or injured clients willing to pay a high price for an opportunity to recover.[4] 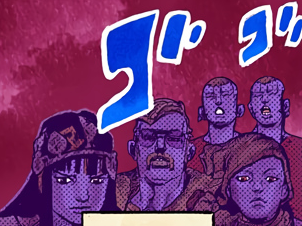 The research team consists of Satoru Akefu (secretly Toru and his Stand, Wonder of U, under the guise of the hospital director), Poor Tom, Wu Tomoki, Urban Guerrilla and his pet Doremifasolati Do. Aside from Solati Do who serves as a vehicle for Urban Guerrilla, they are all doctors employed at TG University Hospital. They cultivate Locacaca to treat wealthy patients.

Holy would later reveal the cause of her condition, being experimented on by the hospital director and his research team with the Locacaca 6251, causing overlapping events throughout JoJolion to occur.[3]

After the death of Wu, the hospital director himself, Satoru Akefu, encounters the organization's opposition multiple times. The first of these encounters comes the next day, when Josuke, Yasuho, and Rai attempt to pursue him. However, Satoru's powerful ability to influence the path of objects (as well as the damage done by their collisions with individuals) proves to be too overwhelming for the group, and Satoru is able to evade them by getting onto a bus. Within the next few days, Akefu's Stand ability terrorizes both Josuke's group as well as other members of the Higashikata family, including Mitsuba. On the same day that Satoru gives a lecture on the use of the newly-developed Locacaca 6251, Josuke manages to enter TG University Hospital and, after healing his wounds with the drug, decides to pursue the Locacaca itself instead of Satoru in order to avoid activating the hospital director's Stand. The remaining member of the organisation is Satoru Akefu the hospital director, in reality a disguised Stand controlled by Toru.

Jobin Higashikata hides the New Locacaca branch in his house, and Toru sends Wonder of U to spy on the house and watch the family. Toru also lays low while Wonder of U deals with Josuke Higashikata and Rai Mamezuku during the time period before the harvest. Toru also attempts to rekindle his relationship with Yasuho Hirose, amidst his continued focus on the Locacaca. Wonder of U automatically attacks and causes calamities against whoever wants to pursue him at the time.

During the day of the harvest, after a speech that Satoru Akefu makes about the hospital's new medicine the Locacaca 6251, Toru has to face a two-pronged operation. His Stand confronts both the Higashikata Family at the Higashikata House, and Josuke Higashikata and Rai Mamezuku at the TG University Hospital, as well as Kei Nijimura. Toru comes to the Higashikata House after Yasuho calls for help and he confirms that the fruit is at the Higashikatas. Toru observes as all of his enemies get steadily eliminated through calamities, but then, Josuke discovers a Stand power that can bypass his own: Soft & Wet: Go Beyond. Creating invisible and partially intangible bubbles, Josuke sends through a phone the bubbles right at Toru who is heavily wounded. In his desperation, Toru eats the last Locacaca fruit and tries to perform an equivalent exchange with Yasuho. However, Kaato Higashikata comes out and drops Tsurugi on him. The equivalent exchange goes wrong for Toru, who dies, turning to dust.