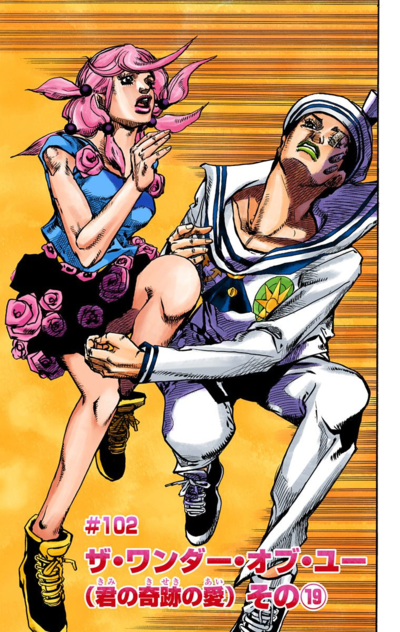 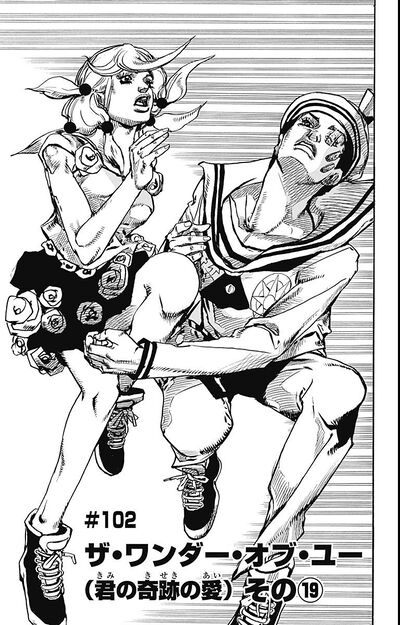 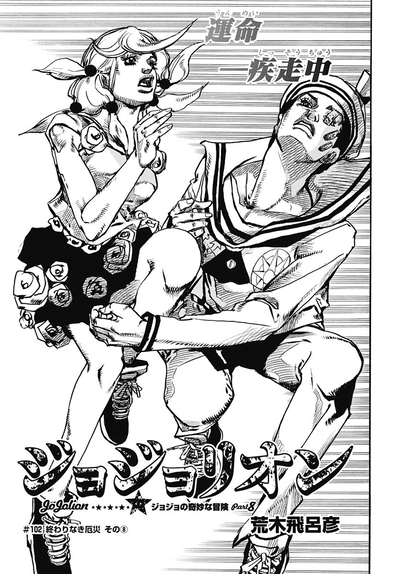 Yasuho recalls her youth, when her mother brought her to a summer camp against Yasuho's will, since she was afraid of the forest and being left alone with unknown people. During their argument, Yasuho discovers with her Stand, Paisley Park, that her mother had searched for flights to Okinawa. Yasuho presses her as to who she would go with, astonishing her mother. Yasuho attempts to find a place to stay, but is turned away by several people. Later, an instructor teaches the campers how to use a fire starter, but Yasuho fails to do so and cuts her hand. When the other children belittle her, Yasuho runs away in tears and begins fiddling with her cell phone near the visitor log-house, before noticing a scraping sound. Yasuho turns her head and sees a young man in a hoodie starting a fire with two rocks in his hands, shown to be Toru. This piques Yasuho's interest and she approaches, though she thinks better of it and questions him. Toru assuages her fears, then asks a favor of Yasuho as he noticed her on her phone. However, he shoots this idea down, claiming that "even a genius adult hacker couldn't find what he's looking for". Toru reveals that he is searching for a person, the name of whom he does not know. All he knows of this person is that they are elderly with a medical license, and that they live in a nursing home with no close relatives and thus little to no visitors. Yasuho easily finds eight people fitting this description in the country, the closest of which being a doctor named Satoru Akefu. In his mind, Toru notes that this man may be good for impersonating and thanks Yasuho by giving him his rocks to impress the other kids. Yasuho asks if she has found who Toru is looking for, to which Toru replies with uncertainty. As he disappears among the trees Toru hopes to meet Yasuho again, when she'll have forgotten about him.

In the present, Yasuho is becoming accustomed to the new arm she gained through the New Locacaca while Joshu laments that this is not what he had prepared for. In the thicket, Toru marvels at the success of the New Locacaca and muses that he may be able to amass great power and influence through the sale of the New Locacaca, claiming that it will soon be his. Yasuho finally confronts Toru, accurately deducing his status as a Stand User and Rock Human. At the same time, she wonders where Josuke and Mamezuku must be that her Paisley Park cannot access. Toru prefers to stay hidden and claims that the moment Yasuho sees his face, she will be under the effects of his Wonder of U. He also claims that he does not wish for her to die and that if she does anything to pursue him, no matter how trivial, a calamity will collide with her and she will be killed by the effect of his Stand. Yasuho wonders as to how long Toru has been in her life. She then pulls out Joshu's smartphone and Toru warns her against using it, claiming that it too will trigger Wonder of U. As she activates it, Joshu demands to make another Equivalent Exchange to have his arm back. Yasuho quickly sees an opportunity to exploit Toru's power to her advantage and keeps the potted plant close to her. Moreover, Yasuho refuses Joshu's demands, saying that it must be brought to Josuke. This enrages Joshu, who brings out Nut King Call and begins to approach Yasuho. She searches the address list and manages to call the contact she was looking for, Kei Nijimura. Toru states that this will result in Yasuho being the next in line to die.

At the TG University Hospital, Nijimura is taking care of Holy Joestar-Kira. She receives Yasuho's call, who asks Nijimura to locate Josuke and give him her phone. Confused, Nijimura notices writing on her mother's palm noting the location of the Locacaca lab, and Nijimura informs Yasuho that she knows where Josuke is.

(Ability only)
Wonder of U

Author's Note
“
The pronunciation was written as "Kyo Nijimura," but I just never checked it this whole time. It's pronounced "Kei," as in the number.
”
—Hirohiko Araki
“
虹村きょうってなってたけどずっとチェックしてなかった。読み方は数字のけいです。
”
—Hirohiko Araki