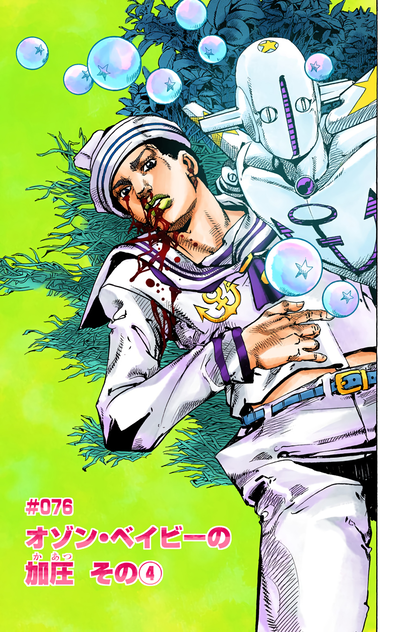 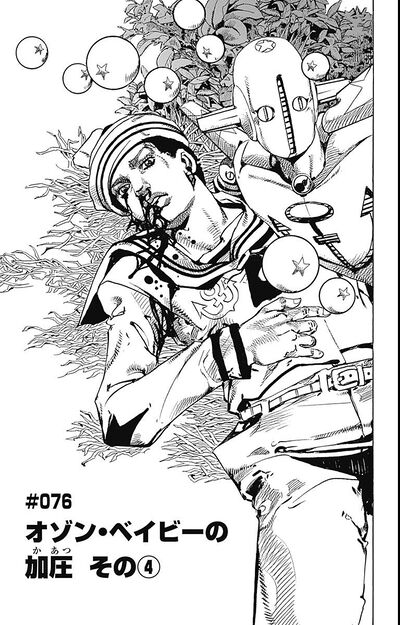 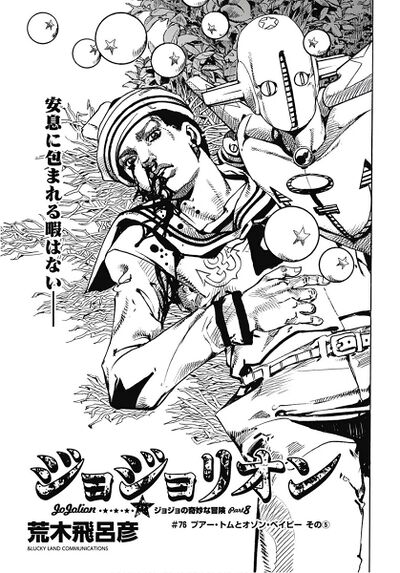 Still poisoned by a yew seed, Poor Tom desperately crawls away from Josuke as the fire trucks and ambulance arrive in the orchard. The multi-layered bubble still approaches Tom, who tries to goad Josuke into abandoning his pursuit, but the man won't relent. Desperate and dizzy from the poison, Poor Tom almost uses the branch as a stick to pop the bubble, and then attempts to throw stones at it as it inexorably flies towards him. Reduced to begging Josuke to spare him, Tom sees the bubble flying into his face and, fearful, ducks and cancels Ozon Baby to stop the bubble from popping.

The bubble flies over Tom and pops into a branch, revealing that it contained nothing. Tricked into cancelling his ability, Tom sees Josuke emerging from his protective bubble and approaching him. In a panic, Tom runs toward the ambulance that his allies are supposedly in, crying his lungs out that he has the prized Locacaca branch. Suddenly, someone shoots Poor Tom twice in the back of the head, obliterating his head. As Josuke crouches to take cover, the branch falls behind the ambulance. An unseen figure opens the back door, takes the branch and drives off. As Poor Tom crumbles into dust, Josuke understands that the enemy's only goal was to seize the branch and he takes pursuit, but falls before he can catch up to them, only taking a glimpse of the registration plate "S Mori 3-11". The enemy has seemingly taken the branch.

Meanwhile at the Higashikata house, Norisuke surprises Tsurugi observing the fire, a cactus pot in his hand. Telling his grandson to stay away from the fire, Norisuke inquires about Tsurugi's health, guesses that his family was attacked by the Rock Humans, fortunately without anyone seriously hurt, and theorizes that their goal was the branch. When Norisuke asks about Jobin's whereabouts, Tsurugi asks if his illness will definitely worsen since the cure has been stolen, to which Norisuke answers that he will "help him" when the time comes. While Norisuke runs off to find his son, it is revealed that Jobin was disguised as the cactus all this time thanks to Paper Moon King.

Jobin holds in his hands the real Locacaca branch, cheekily reminding himself that Paper Moon King can make anyone mistake an object for another one and declares his and Tsurugi's victory. Meanwhile in the ambulance, the unseen driver and his companion notice that Poor Tom has been tricked into taking an ordinary pear branch, and deduce from their observation that Josuke doesn't have it either. Thus, whoever started the fire has stolen the branch. A flashback subsequently shows one of Paper Moon King's origamis landing on Poor Tom as he sought the branch, making him believe in having taken the right one. Distracted by his pursuit, Josuke also left the branch behind, and Jobin finally took it.

Grafting the branch into a ferocactus, Jobin already plans to cultivate the Locacaca, and tells Tsurugi to keep it a secret as Jobin doesn't want his father to ruin everything. Jobin goes on to describe the inherent madness of the world, and declares that whoever wins is in the right.

Meanwhile, Josuke has returned to Rai Mamezuku. Seeing Mamezuku reconstituting himself from the ropes, Josuke is happy to see his ally is alive, but still despairs from having lost the Locacaca.

(1st appearance) (Ability only)
Wonder of U