North of the Higashikata House. The Orchard 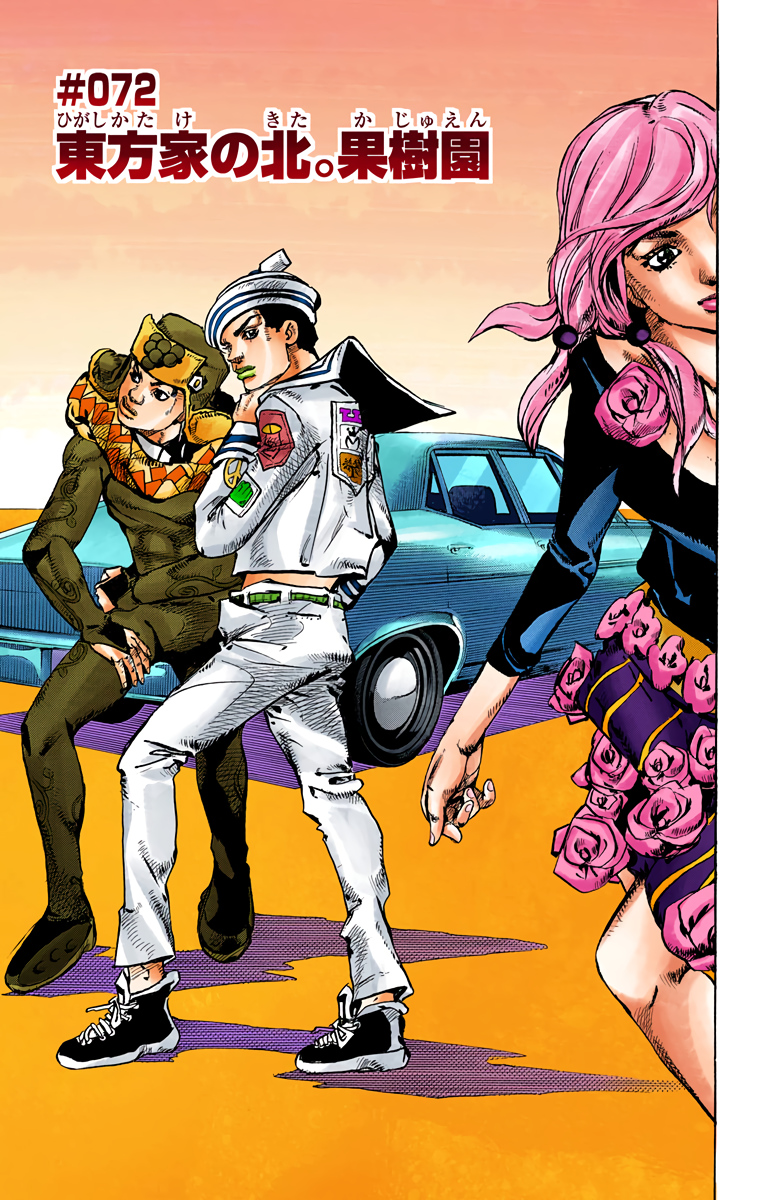 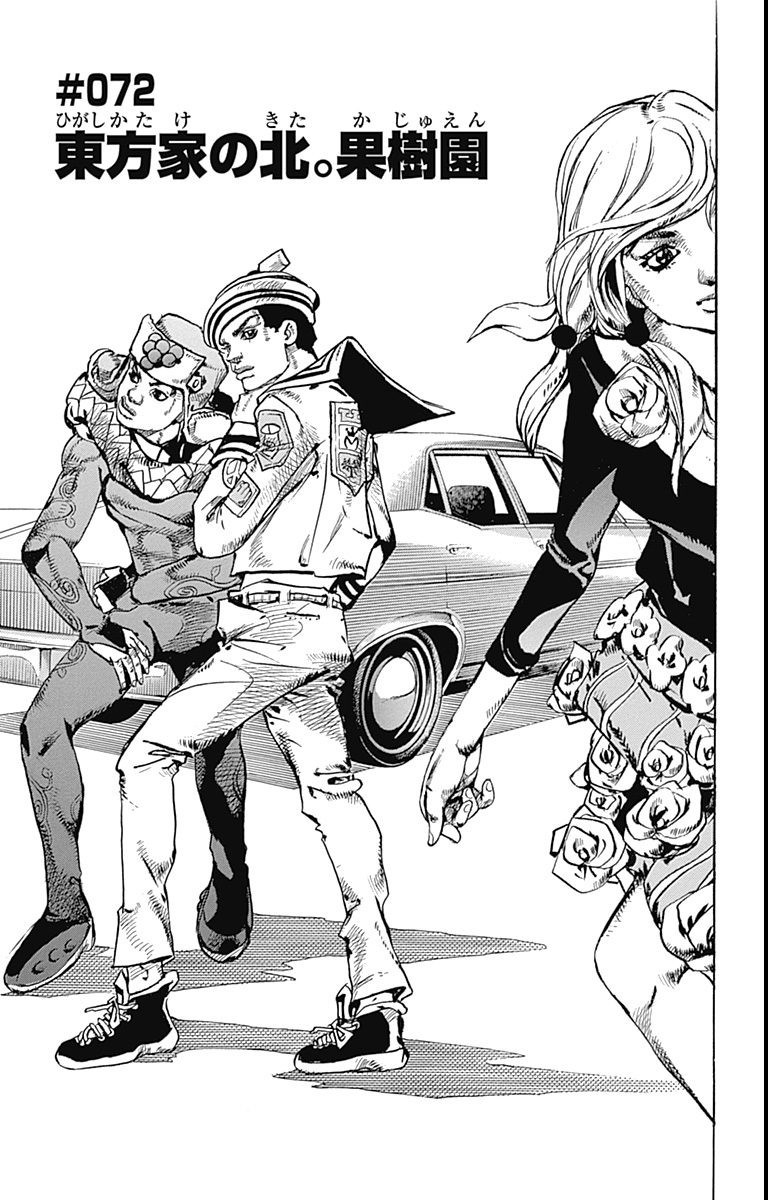 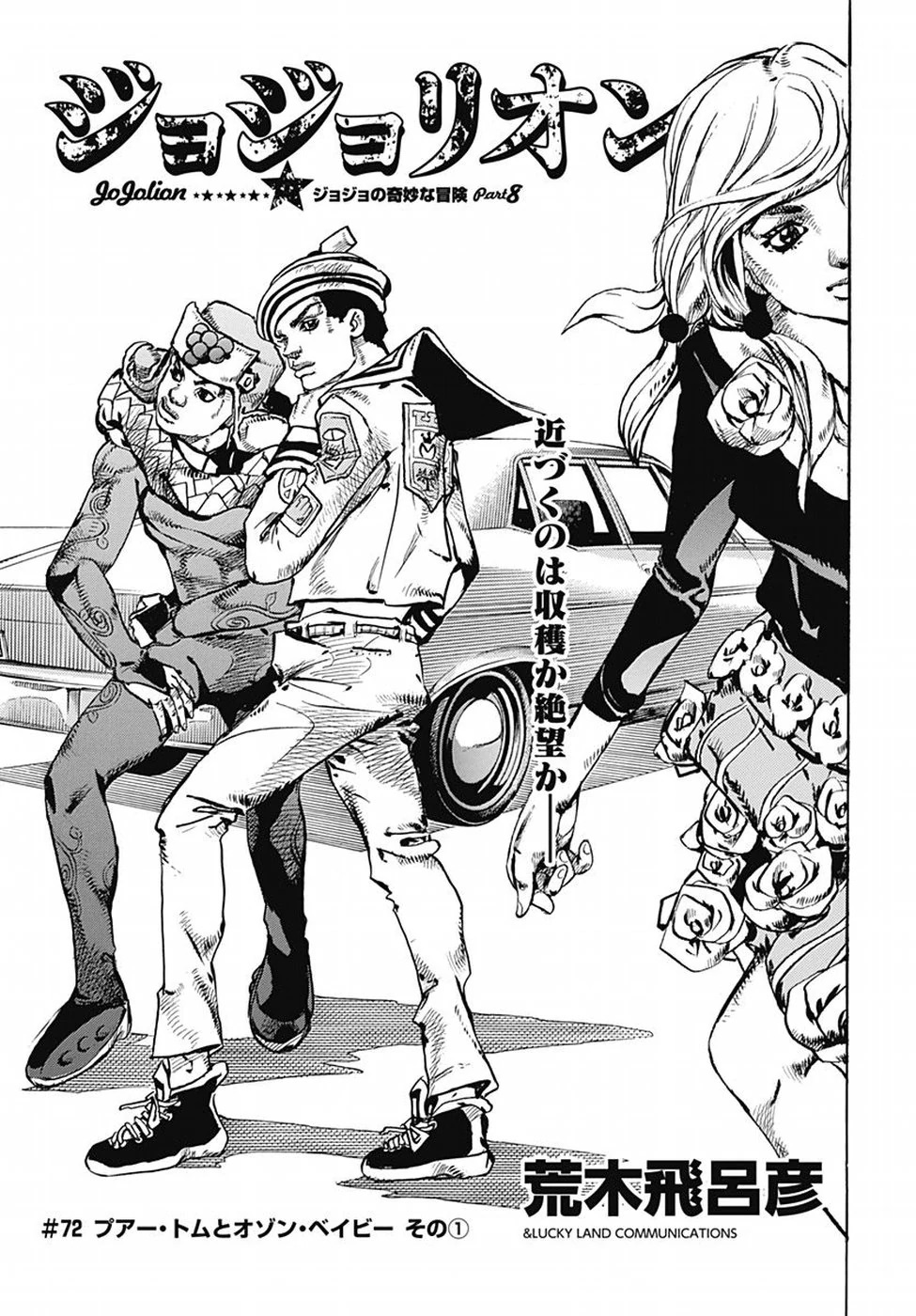 North of the Higashikata House. The Orchard (東方家の北。果樹園, Higashikata-ke no Kita. Kajuen), originally titled Poor Tom and Ozon Baby, Part 1 (プアー・トムとオゾン・ベイビー その①, Puā Tomu to Ozon Beibī Sono 1) in the UJ release, is the seventy-second chapter of JoJolion and the nine hundred nineteenth chapter of the JoJo's Bizarre Adventure manga.

A narrative timer indicating the time before the harvest of the Locacaca fruit is set: 12 days, 4 hours and 33 minutes to the harvest. Norisuke bumps his foot against an unknown bag in the middle of the corridor leading to the dining room, and asks whose it is. However, he is immediately distracted by Jobin's unusually early appearance from his room. At the dining table, the family is having breakfast; as Norisuke sits, he asks Joshu what he is doing. Joshu explains that he's become suspicious of a fish sausage value pack he had bought at the supermarket and examines the sausages individually to determine whether they're smaller than usual. He suddenly notices his sisters Daiya and Hato eating the sausages he hasn't measured yet, to his dismay.

Jobin quietly leaves the scene to check the laundry room where the cameras' video feed can be monitored. He reminisces a day at the baseball stadium with his father. In this flashback, Jobin complains about the lack of special treatment his family gets despite their social standing, mentioning how he couldn't get better seats from the stadium's staff or the Trussardi restaurant which didn't book them a table although they were already full. Norisuke tries to correct his son, but Jobin then explains that the family business is threatened by the competition. When he proposes to expand the trade to mainstream products like olive oils, or processed fruit goods, Norisuke categorically refuses as it would threaten the spirit of his work, and ends the discussion by leaving. Frustrated, Jobin becomes angry that he'd be stuck at the same social standing as anyone else. At this moment, the young man is accosted by Yotsuyu Yagiyama, whom Jobin vaguely recalls. The architect thus invites Jobin to a drink with expensive wine alongside his companions, Aisho Dainenjiyama and the A. Phex Brothers...

In the present, a determined Jobin goes to bury Ozon Baby in the orchard as Poor Tom has instructed.

12 days, 2 hours and 11 minutes before the harvest, Josuke and Mamezuku arrive at the Higashikata estate through the underground corridors. Josuke warns that the Rock Humans already know about these passages, but Mamezuku is confident and unveils another secret tunnel used to cultivate and harvest special products whom only he and Norisuke know about. As they cross the passageway, Josuke asks where Yasuho is, and Mamezuku explains that she had gone back to her house to investigate the broken hairpin she assumes to be a Rock Animal, which may provide a clue to their assailants' identity. Emerging at the surface, Mamezuku and Josuke observe the surrounding trees.

Mamezuku then points to a tree and indicates that the Locacaca branch is here, to Josuke's wonder as he cannot even tell the trees apart. Mamezuku takes the moth larvae in his hand, and then launches his arm at the tree to depose the larvae on the branch with Doggy Style. His deed accomplished, Mamezuku then shuts the hatch from which he was peeking and announces that in twelve full days, a small fruit will have grown, and that they should hide in the meantime.

Meanwhile in the laundry room, Jobin ponders on the situation. Although he is certain that Poor Toom is aiming to kill Josuke, he cannot guess what Tom's real plan is. Jobin is suddenly approached by his son Tsurugi, accompanied by Iwasuke.

12 days, 2 hours and 02 minutes before the harvest, Tsurugi asks his father about the toy house he had seen the latter bury beneath the orchard. Jobin temporarily get angry and severely asks whether Tsurugi had snuck into the orchard, but Tsurugi claims that he only peeked from the house. Telling Tsurugi to close the door, Jobin then explains that soon, Tsurugi will fall ill just as he did, and that the one person who made him better was his mother, Kaato. He claims that the day Tsurugi's Rock Disease comes, Jobin swears that he will be the one curing him, and that he has buried this toy house for his sake. Tsurugi then asks whether Jobin has done something bad, but the sight of a nearby tank being crushed interrupts their conversation.

Suddenly, Tsurugi's nose begins to bleed and his ears begin to hurt, as do Jobin's, and Iwasuke cries out in pain, scratching at the door to escape. Seeing from a window many sealed container being crushed, Jobin warns Tsurugi to not open the door. It is too late, as Tsurugi exits the room into the garage, where he meets with Ozon Baby's misshapen true form. Before it can react, Iwasuke cries out in pain before Ozon Baby and, bleeding from all orifices including the eyes and ears, collapses. The same begins to happen to Tsurugi, and Jobin understands that he has been trapped.