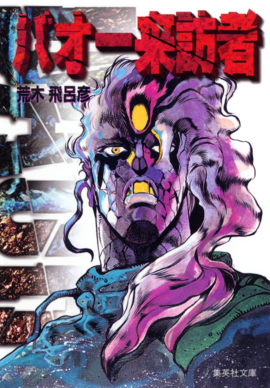 Baoh the Visitor (バオー来訪者, Baō Raihōsha) is a manga written and illustrated by Hirohiko Araki. It was originally serialized in Weekly Shonen Jump with seventeen chapters from October 1984 to February 1985. In September 1985, it was compiled into two tankōbon

volumes with nine chapters. It later released as one bunkoban

The manga was licensed in English and released in monthly chapters by VIZ Media in 1990. As it was financially unsuccessful, it was not until 1995 that it was re-released in tankōbon format.[3] An OVA adaptation of the series by Studio Pierrot

Seventeen-year-old Ikuro Hashizawa can transform into the parasitical bio-weapon, Baoh, gaining superhuman strength and other abilities such as emitting corrosive substances and discharging electricity. He escapes from the secret Dress Organization along with a young psychic girl, Sumire, and the two must face various assassins sent by the organization to kill him.

One day, the mangled corpse of a woman washes up on a northeastern shore of Rikuchu

, Japan. The dead woman is revealed to have been on a certain train several days earlier.

On said train, Dr. Kasuminome (霞の目博士, Kasuminome-hakase, Professor Hazyeye in the English translation) of the Dress Secret Organization (秘密組織ドレス, Himitsu Soshiki Doresu, Judas in the English translation), a covert government group responsible for creating secret weapons, escorts one of his latest creations, Baoh (バオー, Baō), kept dormant in a tank. Meanwhile, a little psychic girl named Sumire (スミレ, lit. "Violet"), who was kidnapped to be studied, escapes from her room and during her escape releases Baoh, revealed to be a young man with superhuman abilities. Baoh and Sumire subsequently escape the train, Kasuminome worried that he might have unleashed a terrible weapon.

Ikuro on the run

Fearful, Kasuminome immediately calls for an assassin to kill Baoh. Later, the boy and Sumire try to bond with each other, but a knife wielding assassin named N.22 stabs the former, forcing the duo to steal a motorbike and flee. The assassin reports his failure, and is ordered to gather more of his comrades to finish off Baoh before his power fully awakens. It is revealed that the boy, named Ikuro Hashizawa (橋沢 育朗, Hashizawa Ikurō), is amnesiac and doesn't remember how he obtained his uncanny strength and regeneration. N.22 soon attempts a second murder, slicing Ikuro's throat, but it only awakens Baoh, who dissolves N.22 before turning back into a human.

Later, a death squad is already searching for Ikuro and Sumire, who are busy betting on horse races to acquire money. Meanwhile, Kasuminome explains to his sponsors how deadly the Baoh, a parasite granting supernatural strength and several other abilities to even the weakest organisms the longer it stays inside of them. To demonstrate its potential, he pits a little Baoh dog against a tiger, a battle which Baoh wins. If Ikuro were to fully develop into a Baoh, he would wreak havoc upon the world and turn everything into a Baoh. Meanwhile, Ikuro and Sumire have settled inside an abandoned building, Ikuro sensing that something inside of him is changing. The death squad attacks the duo, but Ikuro transforms again into Baoh, decimating the squad. Unbeknownst to him, he is observed by another assassin.

Baoh senses the assassin, who reveals himself as a beastmaster commanding a heavily modfied giant mandrill named Martin. Due to its strength and many weapons hidden inside his body, Martin is more than a match for Baoh. Sumire, having sensed that Ikuro's humanity is still intact inside of Baoh, tries to stop the assassin from controlling Martin, only to be hurt. Enraged, Baoh finally overpowers Martin and kills both the beast and his master, healing and turning back into Ikuro.

Walking through the mountains, Ikuro explains to Sumire that after a deadly car collision, Ikuro and his parents were heavily injured and taken to the hospital six months ago. Unfortunately, the doctor was linked to Dress, looking for guinea pigs at the time. Kasuminome callously killed Ikuro's parents under his eyes and took him away to inject the Baoh parasite inside of him. Back to the present, an old couple living in the area gives Ikuro and Sumire shelter and food. But during a moment the old man is isolated, another cyborg assassin emerges, hypnotizing the old man into waiting for midnight and shoot Ikuro in the head with his hunting rifle.

The cyborg named Dordo (ドルド, Dorudo) watches the house until the clock strikes midnight. The old man wakes up and tries to shoot Ikuro, who transforms into Baoh but senses that the old man is not his true enemy. Jumping through the roof, Baoh confronts Dordo who disables all of his sensory organs through chemicals released by a swarm of bats. Thankfully, the old man, who has come to his senses and guided by Sumire, shoots down the bats while taking a bullet. Baoh confronts Dordo, who is heavily wounded, but reveals his heavily modified body. He kidnaps Sumire to use her as bait and escapes with a delta plane to one of the Dress' headquarters near Sanriku. Ikuro is determined to free Sumire, but risks unleashing the beast inside of him for good.

Going away on a motorcycle given by the couple, Ikuro deems it necessary to learn to control his power first to have a chance to save Sumire. Meanwhile, Kasuminome chastises Dordo for his perceived failure and the danger of letting Baoh time to grow stronger. Meanwhile, Ikuro is forced to save a trapped girl from a speeding train and is pushed into managing to activate his acid touch without fully transforming. Humiliated by his hierarchy, Dordo goes out to snipe Ikuro, but his attempt is foiled thanks to Ikuro activating his super senses and strength to evade the bullets. Meanwhile, Sumire is experimented on, but the scientists cannot make her cooperate. Sumire then sees a hulking man, Walken (ウォーケン, Wōken) and is terrified. Walken is one of the most dangerous men in the world, gifted with extraordinary psychic powers and demonstrating it by willing a coffee cup into boiling.

Ikuro at the Dress facility 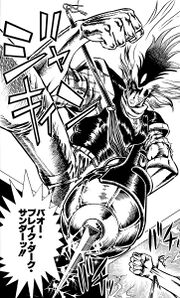 Baoh with a laser weapon

Taken back to the headquarters, Dordo is executed by Walken for his failure and is atomized into dust. To lure Baoh, Kasuminome purposefully tortures Sumire whose distress is detected by the weapon. Ikuro is already scaling the seaside cliff leading to a vulnerable side of the facility and, turning into Baoh, rampages through the security staff as well as survives death traps to reach Sumire's room. He is stopped by Walken, whose ability to destroy anything with a thought makes him invincible and his every attack deadly. Nonetheless, Baoh manages to stab inside Walken's brain by launching one of his arm blades and he finally reaches Sumire.

He is welcomed by a flurry of laser beams, and the attack does not faze Baoh but wounds Sumire. Seeing that Baoh is cornered, Kasuminome prepares to blow up the facility. Meanwhile, Baoh heals the girl with his blood. Walken has woken up, still alive despite his injury, and seeks Baoh for revenge. As the headgear restricting his psychic powers was destroyed by Baoh's attack, the full strength of Walken's abilities causes an earthquake inside the facility. As Sumire awakens, Walken finds them and destroys the floor. All of them, as well as Kasuminome who tried to escape in a pod, find themselves in a cavern. Telling Sumire to flee, Baoh uses one of the lasers to kill Walken for good, unintentionally fatally wounding Kasuminome in the process. The facility then self-destructs, causing the cavern to collapse.

Characters from Baoh the Visitor

The series was adapted into a single-episode original video animation (OVA) by Studio Pierrot in 1989; licensed for an English DVD release by AnimEigo in 2000, delayed until finally released in 2002.