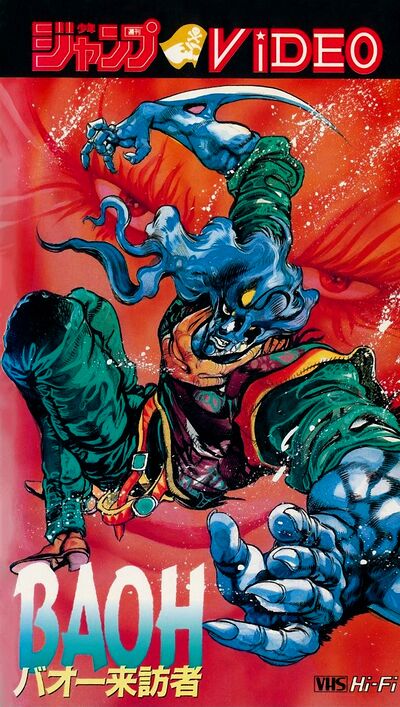 Baoh the Visitor (バオー来訪者, Baō Raihōsha) is a single-episode OVA adaptation of the manga series Baoh the Visitor by Hirohiko Araki. It was produced by Studio Pierrot and distributed by Toho and Shōnen Jump Video. The OVA premiered in select theatres on September 16, 1989 and was eventually released to VHS on November 1, 1989. A LaserDisc version was distributed on December 21, 1989.[1]

An English localization of the VHS and LaserDisc were released by AnimEigo on May 24, 1995 and June 6, 1995 respectively. The company followed with a DVD version on February 26, 2002. A Japanese DVD release by Toshiba Digital Frontiers was eventually distributed on April 2, 2003.

The story begins on a running armored train of the Secret Dress Organization. A little girl named Sumire has escaped her cell and is pursued by Sophine, one of Dress' agents. Sumire is a psychic and uses her power to break into a fortified wagon where the containment of Baoh is overseen by Dr. Kasuminome. Sumire then turns a valve, causing a failure of the containment system which reveals a young boy with extraordinary strength and resilience. Sumire and the boy then escape from the train in the ensuing chaos.

Hours later, Sumire and the boy take a rest. The boy named Ikuro reveals that he's amnesiac while Sumire explains her past as an orphan. Suddenly, an assassin from the Dress organization stabs Ikuro from behind. Ikuro and Sumire then flee on a motorbike with the assassin pursuing them. The assassin eventually ambushes Ikuro and inflicts mortal wounds with his combat knife, but Ikuro partially turns into Baoh, heals his wounds and kills the assassin. Meanwhile, Kasuminome demonstrates the potential of Baoh to the sponsors of the Dress organization. Dordo, an elite enforcer of the organization, also shows that bullets to the head and fire can kill the Baoh. Dordo is then deployed with a death squad to hunt down Ikuro.

Ikuro and Sumire take refuge in an abandoned building. Ikuro remembers a car crash and the subsequent experimentations Kasuminome has performed on him. Sumire senses the death squad coming and a battle ensues. Sumire is knocked out in the struggle but Ikuro fully turns into Baoh and decimates the squad. When Dordo takes Sumire hostage, Baoh uses his stinger hairs to melt Dordo's skin, only to reveal that Dordo is a cyborg whose loss of skin is a minor inconvenience. Fleeing with Sumire, Dordo goads Ikuro to come to Dress' main laboratory to take her back.

Back at the lab, Kasuminome tortures Sumire to lure Ikuro, who can sense her suffering. Ikuro scales a cliff leading to the lab and is ambushed by Dordo on a helicopter who tries to shoot him with an explosive bullet. However, Baoh manifests a new ability and projects an energy field returning to bullet to Dordo, destroying the helicopter and killing the agent. Baoh enters the lab but a psychic on Dress' orders confronts him. Walken is a powerful psychic but Baoh eventually throws a sharp arm-blade into his skull, taking him out. Desperate, Kasuminome engages the self-destruction of the building.

Ikuro breaks into Sumire's cell, disables the laser defense set up in the room and revives her. Meanwhile, Walken has regained consciousness; the arm-blade destroyed Walken's bandana which was a psychic limiter, driving him berserk. Walken confronts Ikuro and opens a hole on the ground, making everyone fall into a cavern including Kasuminome and Sophine who were in an escape pod. Ikuro silently points out to an escape route and Sumire leaves him after a tearful goodbye. In the ensuing battle against Walken, Baoh prevails by using a laser to his advantage. Walken, Kasuminome and Sophine die, and the cavern collapses.

Years later, Sumire is still free and is shown waiting by the beach. She sees a vision that Ikuro is still alive, slumbering in the depths of the pond below the lab. 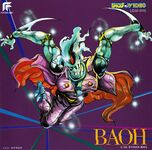