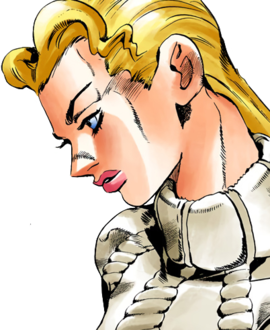 Gloria Costello (グローリア・コステロ, Gurōria Kosutero) is a minor character in the sixth part of JoJo's Bizarre Adventure, Stone Ocean. She is the sister of Ermes Costello and was killed by Sports Maxx in 2008, three years prior to the story. Ermes purposely sent herself to Green Dolphin Street Prison in order to exact revenge.

Gloria Costello was a slim woman who had light semi-long swept-back hair except for two locks at the front. She was described as beautiful. Gloria had arched eyebrows, noticeably thicker in the interior half than at the exterior. She wore a cropped turtleneck sweater and a skirt.

Gloria Costello was described as a lively and strong-willed individual. She also had a serious side, and was more of a mother figure than a sister to Ermes. Gloria constantly nagged Ermes to have her help at their family restaurant and was protective of her sister's well-being. After witnessing a brutal murder behind her restaurant, Gloria initially chose to let the crime happen and never mention it, as she would have never been able to keep her restaurant afterwards. However, Sports Maxx witnesses Ermes passing by the crime scene, forcing Gloria to call the police to protect her sister.

Despite her beauty, she had no intention of marrying anyone. Speculation from F.F. suggests it was due to her father getting old, so she wanted to spend her life running his restaurant together with her little sister.[2]

When Gloria turned twenty, she inherited her Mexican immigrant father's small restaurant in the slums of Florida. Despite being a small restaurant, she had a steady flow of customers.

One day, when the restaurant was closed, Gloria was giving her usual speech to Ermes, lecturing her about not helping out in the restaurant and acting like a delinquent. Being seventeen at the time, Ermes had no interest in helping the restaurant and wanted to get a scholarship in cross-country to go to college. Knowing that mentioning this to Gloria would cause a fight, Ermes decided to run out of the house.

At that moment, in an abandoned back alley behind the restaurant, Gloria heard the groaning of someone near a luxurious car. Upon further inspection, Gloria sees a man tied up on the ground with a gang leader named Sports Maxx standing next to him. Sports Maxx asks the man to bite down on a wooden stick nearby, making sure to prop the stick so it was vertically inserted into his mouth. Sports Maxx then stomps on the man's head, causing the stick to impale his skull and kill him. Gloria reacts to this, but manages to hide behind a wall before Sports Maxx sees her. She wasn't intending to spy on them, and she decided she wouldn't report them either. She felt the best course of action would be to just let whatever happened there handle itself, in order to keep her restaurant safe. Unfortunately, Ermes was still running down the street at the time, and Sports Maxx notices her, assuming that she was going to tell someone about what he did.

Gloria ended up calling the police in order to protect her sister. However, the police had messed up. They claimed that the state of Florida had institutionalized capital punishment and since Sports Maxx was an infamous criminal they had been chasing for a few years, they could use her testimony to get him arrested and protect her family. In order to combat the police, Sports Maxx sent someone else less well known to kill Gloria. She was killed and her body was found in a gutter. She had become famous in the newspapers after the incident. As the only eyewitness was gone, the only thing the police could get Sports Maxx for was tax evasion and inflicting bodily harm, which only sentenced him for five years of prison. After that, Gloria and Ermes' father died soon after, causing Ermes to lose everything: the restaurant and her family.

While Sports Maxx is in Green Dolphin Street Prison, Ermes decides to commit a crime so she can get arrested and get revenge, killing him there during a time where his gang isn't with him and he is completely defenseless.[2]

In prison, Ermes shows a photo of Gloria to Sports Maxx so he would remember her.[4] After a long battle, Ermes succeeds in avenging her, kicking and punching Sports Maxx several times until he dies.[5]