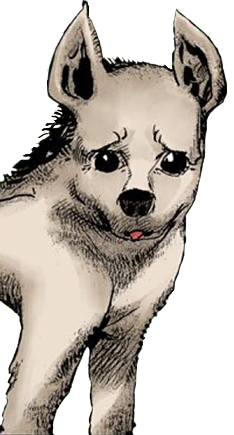 He is a Rock Dog (岩犬, Iwa Inu) currently in the care of Tsurugi Higashikata and living with the Higashikata family in his own dog house.

Iwasuke is a medium-sized dog resembling a striped hyena or aardwolf, though without the stripes of those species. Although he primarily has light-colored fur, he notably has a dark mane like a mohawk running from the top of his head to his back. His ears are either pointed or floppy when he is comfortable and he has a thin tail with a thick clump of fur at the end.

The series is known for alternating colors between media, the information presented below may or may not be canon.
Fur
(Light brown fur with black mane and tail)
Eyes(Black)
Nose(Black)

Iwasuke is an obedient pet and easily forms an attachment to his owner, Tsurugi Higashikata.[1] True to his curious tendencies as a stray animal, he primarily roamed around the springs at the area of the Morioh Wall Eyes and the Higashikata estate, which ultimately led him to eat a Locacaca fruit at some point during the Morioh earthquake.[2] In spite of this, he easily became loyal to Tsurugi after he was taken in to live with the Higashikata Family in their home.

In the Higashikata estate, Iwasuke often strolls around when he is not around Tsurugi. He can be a perky house pet, as seen when he playfully pretended to bite Tsurugi's finger when the latter covered his nostrils for fun.[3]

As a Rock Animal, Iwasuke can shift his outer appearance from a normal dog into a rock-like state and vice versa at will. His hardened skin is durable enough to withstand Ozon Baby's pressure.[4]

Iwasuke is capable of phasing through walls.[1] 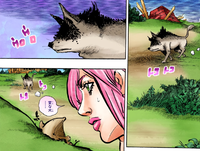 At the time of the earthquake in Morioh, Iwasuke eats the Locacaca fruit left behind by Josefumi Kujo and smiles from the taste before walking away.[2]

Yasuho Hirose initially sees the dog walking around near the Wall Eyes and Lover's Cape, in the spot where she first met Josuke.[5] When she later leaves the Higashikata House's underground storeroom, she sees Iwasuke suspiciously walking around their property.[6] 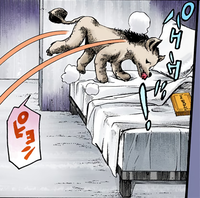 Tsurugi tells Norisuke and Josuke that he also saw Iwasuke near the Wall Eyes. Iwasuke turned all hard like a rock and looked crumpled, causing Tsurugi to assume he was dead. Yotsuyu Yagiyama then healed the dog by feeding him a Locacaca fruit and he suddenly got up and started walking again.[7]

Wanting to learn the secret behind what healed Iwasuke, a trap with lots of dog food is laid out for him by Norisuke and Tsurugi. However, Iwasuke ignores it and doesn't appear. Later when Norisuke, Tsurugi, and Josuke are in the underground storeroom, Iwasuke mysteriously phases through the wall and enters the room. He jumps onto the bed to eat a piece of the Locacaca left behind which Yotsuyu was carrying. Josuke notices and yells at the two to grab him. Iwasuke doesn't run away and instead wags his tail while being pet by Tsurugi and Norisuke. The Locacaca drops out of his mouth and he starts eating Josuke's sesame honey dumplings. While the trio investigate the fruit, Iwasuke lies down and prepares to sleep. Norisuke asks what they should do with him. Tsurugi feels bad for him since he probably lost his home in the earthquake and declares that he'll keep him, naming him Iwasuke. Josuke and Norisuke glare at Tsurugi because of the "suke" suffix.[1]

Iwasuke joins the rest of the family for their family photo once Jobin Higashikata comes home. Outside, Iwasuke is bothered by Tsurugi covering his nostrils with two fingers. He tries to bite Tsurugi but fails since his owner moves his hand away in time.[3]

Iwasuke and Tsurugi confront Jobin in the garage, wondering what he's doing there. The three are then suddenly attacked by Ozon Baby and Iwasuke yelps in pain.[8] He tries to run out of the garage while Jobin yells at Tsurugi to stop him. Unfortunately, he is dealt with more pressure and blood bursts out of him. He slowly manages to crawl away into his dog house.[9] Jobin comforts Tsurugi by saying Iwasuke most likely turned his body into stone inside the doghouse so he can withstand the pressure.[4]

After Poor Tom is killed, Norisuke sees Iwasuke emerge from his doghouse. He coughs but is otherwise fine after the attack.[10]

Iwasuke is with the Higashikata family at the fruit parlor, as they plan to celebrate Norisuke's discharge from the hospital.[11]